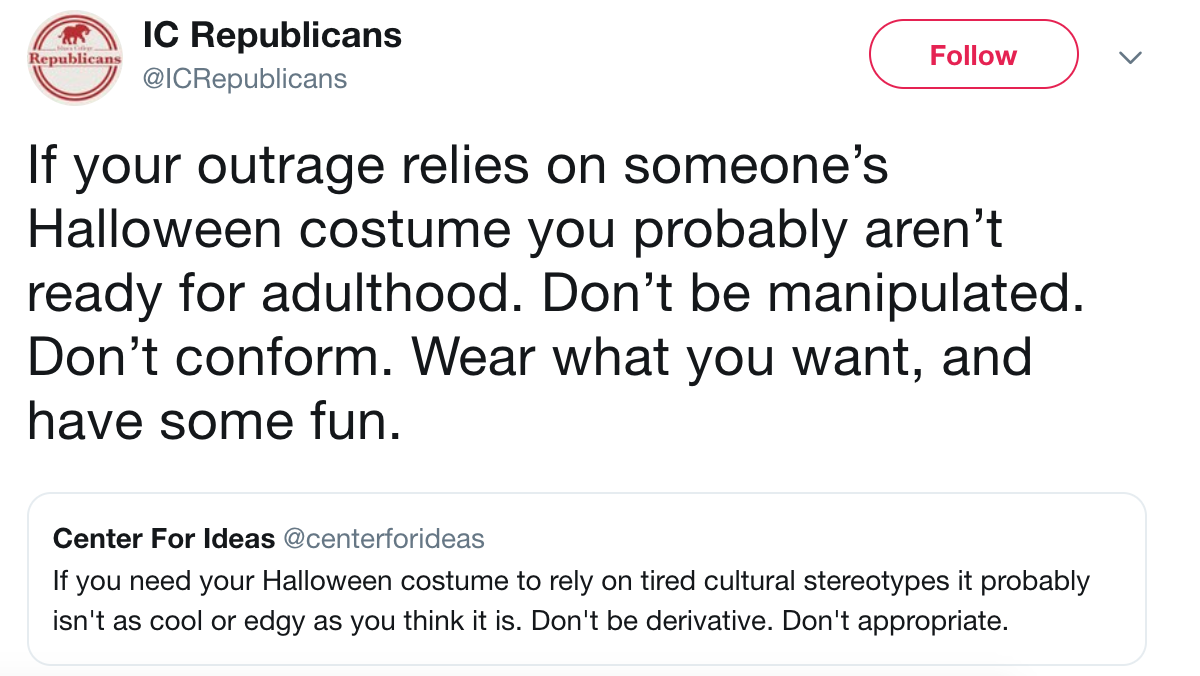 Photo via IC Republicans twitter page
The Ithaca College Republicans have received backlash from the college community regarding its posts on social media about cultural appropriation. This included the IC Republican's response to a tweet from the Center for Inclusion Diversity Equity and Social Change at the college.
By Phoebe Harms — Staff Writer
Published: October 31, 2018

IC Republicans has received backlash from the Ithaca College community for statements it posted to social media regarding cultural appropriation on Halloween.

The statements were in response to a flier posted around campus, which explained the definition of cultural appropriation and informed students how to approach wearing costumes in a culturally sensitive manner. The IC Republicans Twitter and Facebook accounts posted photos of the flier paired with the captions “Make sure you don’t have fun this Halloween! Wouldn’t want someone to complain!” and “Remember: Fun is strictly forbidden this Halloween. You might offend someone!”

Additionally, IC Republicans tweeted in response to the Center for Inclusion Diversity Equity and Social Change (IDEAS) — a department within the Division of Student Affairs and Campus Life, which encouraged students to not dress in culturally appropriative costumes during the unofficial Halloween weekend. IDEAS tweeted, “If you need your Halloween costume to rely on tired cultural stereotypes, it probably isn’t as cool or edgy as you think it is. Don’t be derivative. Don’t appropriate.” IC Republicans replied via Twitter saying, “If your outrage relies on someone’s Halloween costume you probably aren’t ready for adulthood. Don’t be manipulated. Don’t conform. Wear what you want, and have some fun.” Both posts from IC Republicans received immediate responses from several students and alumni, on both Twitter and Facebook, criticizing the statements. 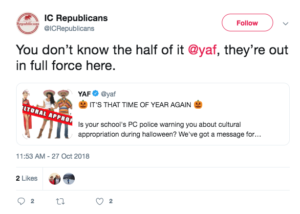 Cultural appropriation was defined on the flier as “the utilization of one’s culture without permission.” This is often abused on Halloween when individuals dress up in costumes that take from others’ cultures. Many criticize cultural appropriative behavior for reinforcing power dynamics within society by reducing members of marginalized communities to costumes. A section of the flier from IDEAs titled “Why Does This Matter?” says “cultural appropriation stems from respect and context… Historically, many cultural groups have been, and unfortunately still are, oppressed. Ceding from one’s culture without their permission essentially affirms a sense of entitlement and continues to enforce societal power dynamics.”

Rosanna Ferro, vice president of the Division of Student Affairs and Campus Life, said in response to the situation via email that students should be respectful of one another.

“We encourage civility, thoughtfulness and respect from all members of the campus community toward all,” Ferro said.

Ferro did not have comments specifically directed at IC Republicans.

Senior Lucas Veca, president of IC Republicans, said on behalf of the group that that it feels that its intentions behind its tweets were misunderstood by the community. He said it wanted to show that there are various opinions on cultural appropriation.

“The IC Republicans believe that, in light of recent events, the state of political discourse in our nation is scary and dangerous,” IC Republicans said. “We are able to admit that we have, at times, contributed to this dangerous rhetoric and we regret that. … Our goal in tweeting about cultural appropriation was to increase awareness for every individual’s right to freedom of expression and to display that there are different opinions on this issue. The right to expression ought to apply to everyone equally.”

Sophomore Thomas Peyton, who responded on Twitter to IC Republicans’ tweet in reference to the original tweet from IDEAS, said he believes that IC Republicans was not using its platform to engage in healthy debate but instead, just posting with the intent to offend others and be provocative.

“In today’s political climate, any deviation from productive conversation is just useless noise,” Peyton said. “That’s all IC Republicans are to our campus: noise.”

Senior Lauren Kleiman tweeted in response to IC Republican’s tweet of the flier, “Lol this group is so pathetic, they can’t enjoy Halloween without being racist.” Kleiman said via email that she felt IC Republicans did not understand that its actions were objectively insensitive, and no holiday is an excuse to perpetuate harmful stereotypes. 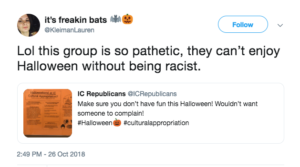 “If you can’t dress up for Halloween without making fun of people’s cultures and identities, maybe just don’t dress up this year,” Kleiman said via email.

Catherine Proulx ’17 tweeted at the college asking, “Can y’all have a talk with ic reps leadership? They’ve gone from intellectual diversity to plain ol racism.” As of Oct. 30, her first tweet from her thread in response to IC Republicans has two retweets and 40 likes, and the second in the thread has 28 likes.

She said she is concerned about the leadership of the IC Republicans.

“As an alumni that was very involved in IC’s political organizations, it’s disappointing to see an organization put out a tweet like this,” Proulx said.

During her time at the college, Proulx was a part of Student Government Council and headed IC Progressives, a progressive political group on campus.

Sophomore Akshan Shah, communications director for IC Democrats, said on behalf of the organization that it felt the series of posts from IC Republicans was ignorant and treating marginalized groups as costumes to dress up on for events like Halloween is offensive and reinforces power structures and hierarchies.

“We condemn the position made by IC Republicans and feel that they should reconsider their costumes this year,” Shah said.