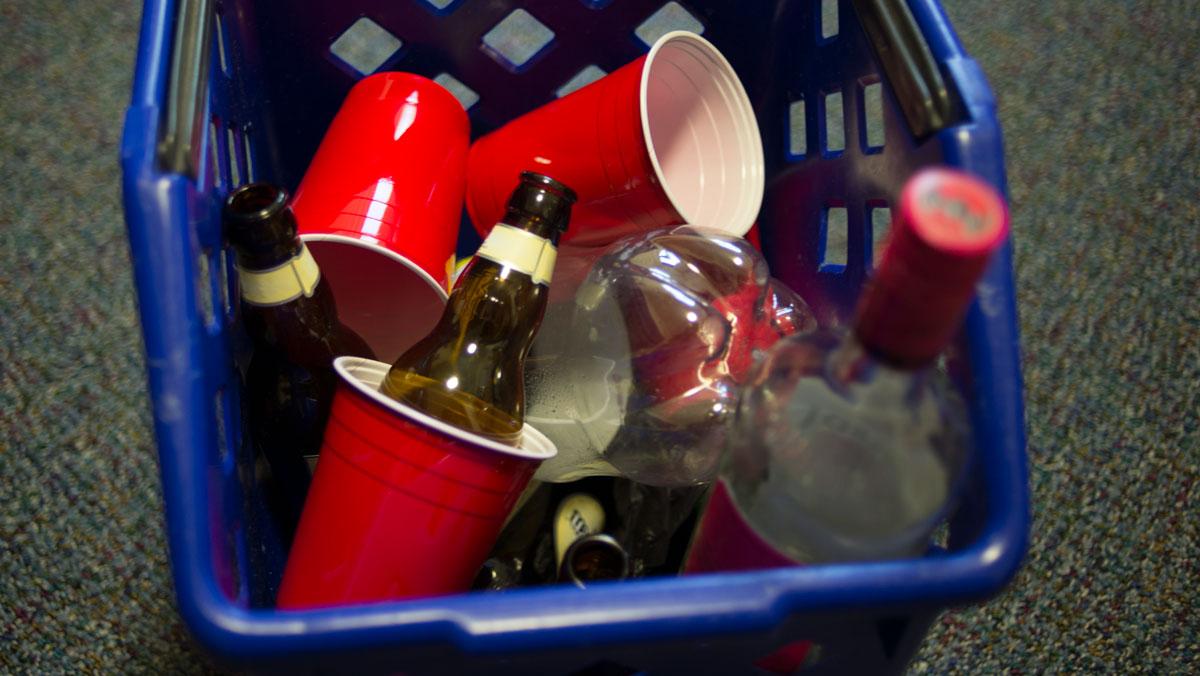 Ithaca College administrators approved additions to the college’s Residential Life Rules and Regulations that prohibit the presence of empty alcohol containers and other alcohol paraphernalia, and are now in effect for the 2016–17 academic year.

One new measure prohibits the possession of alcohol containers for students under the legal drinking age of 21. The other prohibits for all persons, regardless of age, the presence of “high-risk drinking paraphernalia,” which includes beer pong tables, beer bongs or funnels and all drinking games with or without alcohol, like water pong.

The Alcohol and Other Drug (AOD) Prevention Team proposed the above two additions in March 2016 to the Office of Residential Life and the associate provost for student life, Rory Rothman.

The AOD Prevention Team, consisting of staff and administrative members from the Offices of Residential Life and Judicial Affairs, first convened in 2010 to reduce the severity of substance abuse among students in order “to maximize student learning, foster student success, and further the educational mission of Ithaca College,” according to the team’s website.

Nancy Reynolds, health promotion center program director and AOD team member, said the policy extension was not added in response to any event in particular, but to research the team had conducted for several other institutions, such as the University of Delaware, Syracuse University and the University of Massachusetts Amherst. Reynolds said these schools had success with their policies and cited them as “prevailing best practice[s]” on which to base the college’s policy.

To enforce the added policy measures, Martin Petrella, residence director for Boothroyd, Rowland and Tallcott Halls and AOD team member, said Resident Assistants are now required to document the presence of any empty alcohol containers or alcohol paraphernalia and report it to their RD. He said the first offense would most likely result in a warning, but subsequent offenses would constitute more punitive measures, such as a meeting with a hearing officer. Petrella said the goal of the policies is to provide students more supportive resources.

“The goal isn’t to be more forceful with the policy,” Petrella said. “It’s to be able to reach more students who might need the education through our health promotion office to get them those resources so they understand why we take alcohol and other drugs so seriously.”

Mike Leary, assistant director for judicial affairs and AOD team member, said the goal of the policy is to create a safe environment for students and encourage them to make responsible decisions.

“The Alcohol and Drug Prevention team is always looking for the latest prevention strategies so that we can educate our campus community and reduce high-risk drinking,” Leary said. “We wanted to send a clear message that students under the age of 21 cannot purchase, possess or consume alcohol or have empty bottles with remnants of alcohol.”

Reynolds said the measures were adopted from a presentation on alcohol prevention by Dr. Andrew Wall, a prominent researcher of the subject from the University of Rochester. In his presentation, he said a college’s alcohol prevention policy is more effective in promoting healthy behaviors if it has a consistent attitude toward alcohol, as well as empty containers of alcohol.

Sophomore Anna Gould is an RA in West Tower. She said that as she does her first series of room checks for her residents this week, she will be on the lookout for containers of alcohol, shot glasses, empty bottles and any other alcohol-related materials.

She said because Residential Life has already given fair warning about the new policy, they will have to write up any presence of alcohol paraphernalia or empty bottles, reminding the students that offenses result in the student’s documentation, a written warning to the student and a meeting with a hearing officer.

Many students have said they wouldn’t alter their drinking habits and expressed skepticism over the policy’s ability to make effective change. Junior business administration major Graeson Michaud said the policy will not benefit those who need help with a drinking problem because it incentivizes them to hide the evidence.

“I think it highlights the disconnect between Res Life and the students,” Michaud said. “It sounds like they would rather ignore that there is a problem or just penalize everyone.”

However, Petrella said he didn’t agree with the characterization of students hiding empty alcohol containers because historically, students have only hidden full containers and left out the empty ones as decoration.

“Students were most likely always hiding something so I don’t know if this policy is going to exactly change that,” Petrella said. “This policy is aimed at giving our staff more touchpoints to be able to have those conversations. … If students are going to hide an empty alcohol bottle they’re probably going to just throw it out and then what’s the point?”

Other students said the prohibition of any alcohol paraphernalia is too punitive. Sophomore TJ Horgan is the president of the college’s chapter of Students for Sensible Drug Policies, an advocacy group that takes a practical approach to crafting alcohol and drug safety regulations. He said he supports any measures that are aimed at supporting student safety, although because one of the new measures simply bans all alcohol paraphernalia, he said the policy doesn’t acknowledge the nuances of student safety with alcohol.

“Outlawing funnels is, in my opinion, a method of harm reduction because it is encouraging students to not drink that much in one serving,” Horgan said. “However, banning water pong does not serve to reduce any harm because — I could be mistaken — but there is not much harm associated with water.”

Junior Alem Ballard said the additions to the policy created more issues than they solve by restricting the personal freedoms of students who are over the drinking age.

In response to concerns for constrained freedoms of the student body, Petrella said the policy is less concerned with freedom and more concerned with the safety of students, similar to policies relating to fire safety.

“Legally someone is allowed to own a candle, but we don’t allow candles in our residence halls because it poses a health and safety risk to our students,” Petrella said. “Similarly, paraphernalia and high–risk drinking also poses a risk to our students.”