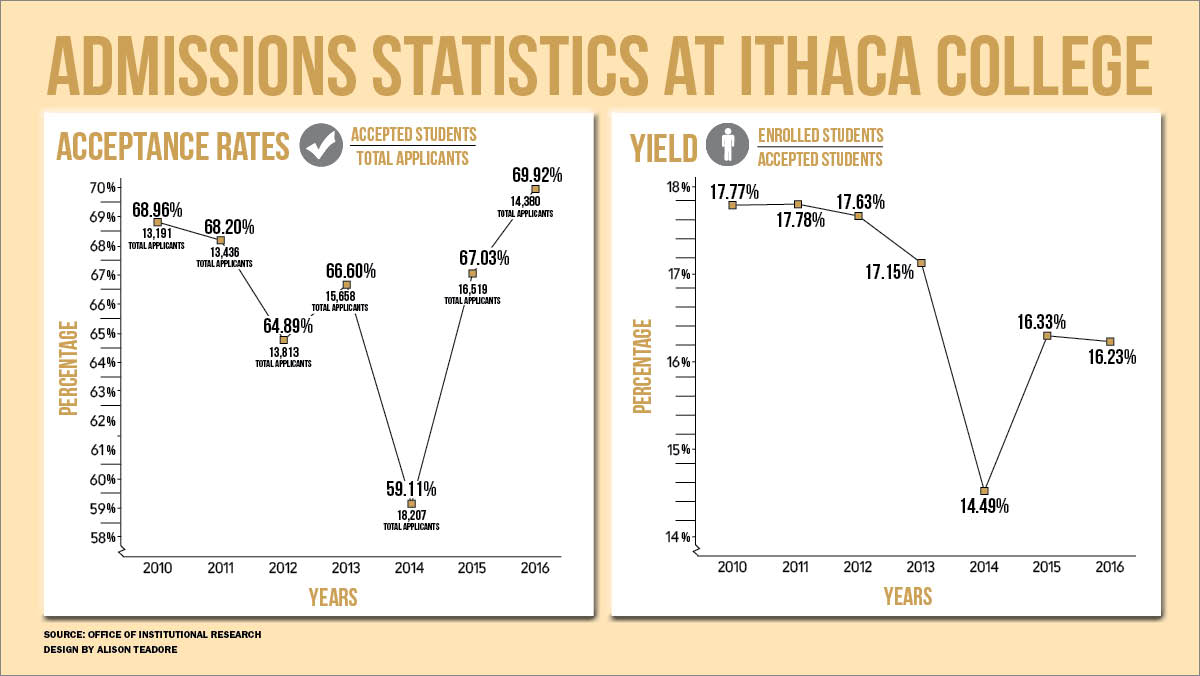 After receiving 2,139 fewer applications in 2016, Ithaca College accepted 69.92 percent of applicants, the highest percentage of its applicant pool since 2010, and landed 18 students below its enrollment target.

The college enrolled 1,632 first-time full-time freshmen in 2016, down from 1,808 in 2015, but it is closer to its enrollment target of 1,650, said Gerard Turbide, vice president for enrollment management. The college accepted 10,054 students out of the 14,380 students who applied, or 69.92 percent, compared to accepting 11,072 students out of the 16,519 who applied for 2015, or 67.03 percent. A year after having its largest class ever, the Roy H. Park School of Communications enrolled 386 freshmen, a 92-student decrease. The School of Music had its smallest freshman class since 2010. Yet, administrators from both schools said the decrease was intentional.

With the exception of 2014, when the college had a record-high 18,207 applicants, resulting in a record-low acceptance rate, the college’s acceptance rate has steadily increased over the past five years from 64.89 percent to 69.92 percent. In addition, the college’s yield, which is the percentage of students admitted to the school who actually enroll, has declined from 17.62 percent in 2012 to 16.23 percent in 2016, again excepting 2014, when it was at a low of 14.49 percent.

Turbide said colleges across the country are dealing with declining yield since students are applying to more colleges. A report released by the National Association for College Admission Counseling found 36 percent of students reported applying to more than seven colleges, an increase from 28 percent in 2012.

Karl Paulnack, dean of the School of Music, said the school’s decrease in freshmen is part of a plan to become approximately 5 percent smaller, in an effort to increase student quality and experience.

“The [School of Music] is as large as it can possibly be right now,” Paulnack said in email. “We hope to very slowly and gradually get slightly smaller so that we can take good care of our students, have sufficient numbers of faculty studios — we don’t have even one extra at the moment — and fit comfortably within our building.”

Regardless of the type of student, the School of Music still has 20 fewer new students this year, dropping from 148 to 128.

“We saw an opportunity last year to go up to 500 students and we took it,” Roberts said. “But you can’t do that every year.”

Turbide said the Park School received fewer applicants this year. He also said the lower number of students enrolled did not have to do with the academic quality of the applicant pool.

In the other schools, enrollment was more steady. In the School of Health Sciences and Human Performance, 340 first-time full-time freshmen enrolled, which was a 49-student drop from 2015, but still above its enrollment of 306 students in 2014.

The School of Humanities and Sciences enrolled 639 first-time full-time freshmen, eight more students than in 2015.

Overall, this year’s class was the least diverse class since 2012, with 21 percent of first-time full-time freshmen identifying as African-American, Latino, Asian or Native American. That number is down from 22 percent in 2015 and 22.2 percent in 2014. Turbide, however, said that did not worry him.

“One year doesn’t make a trend,” he said.