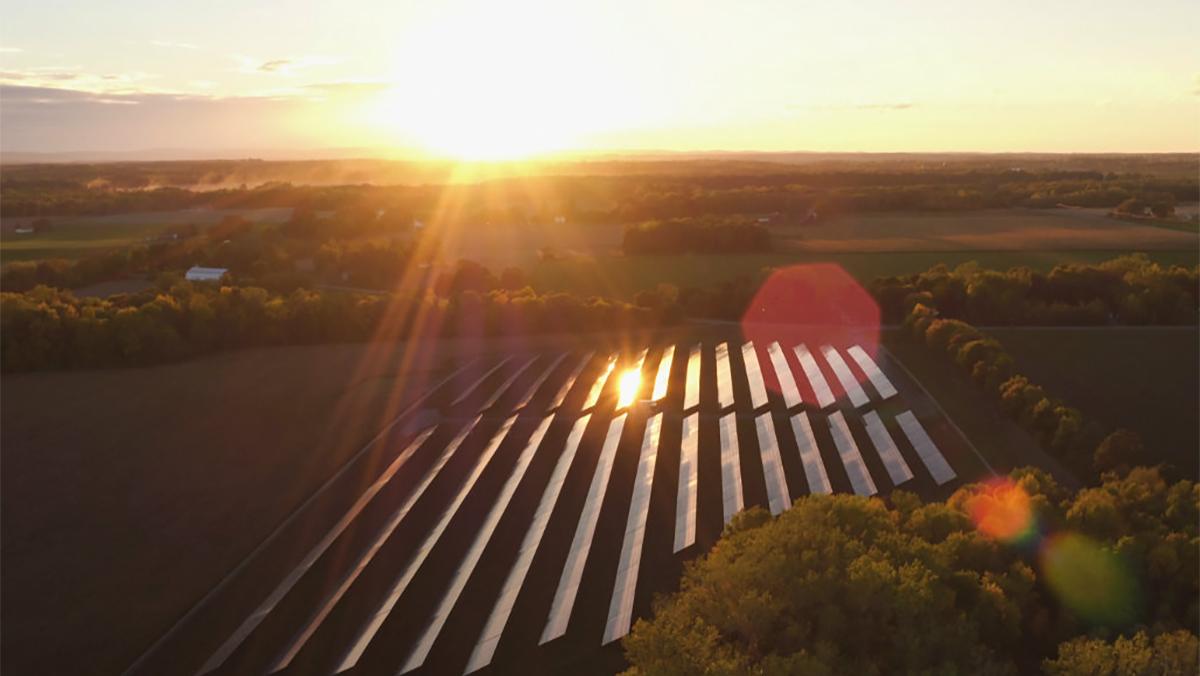 Courtesy of Ithaca College
The collection of 9,000 solar panels, which is located about 40 miles away from campus in Seneca, New York, is on track to meet the college's energy goal.
By Madison Fernandez — Contributing Writer
Published: September 14, 2017

Ithaca College’s solar panel farm appears to be on its way to reaching its goal of covering 10 percent of the college’s energy needs.

The initial goal was for the panels to produce 3.5 million kilowatt-hours per year, Greg Lischke, director of energy management and sustainability, said. Currently, the solar panels have produced 2.5 million kilowatt–hours, which is about 65 percent of the original projection. A few months still remain to see if the goal will be reached completely, but the projection remains on track.

The collection of 9,000 solar panels, which is located about 40 miles away from campus in Seneca, New York, began operating late last November.

The progress of the solar farm is contributing to the college’s overall goal of reaching carbon neutrality by the year 2050, Lischke said. Fifty percent of the college’s carbon footprint is related to the electricity purchased by the college, but with the introduction of the solar farm, there has been a 10 percent decrease. Lischke and his team met early last week to discuss the Climate Action Plan and determine if the established 2050 date is still reasonable, he said.

“Personally, I’m pretty optimistic,” Lischke said. “I would like to see us be able to move it forward, but that would require support, both financial and other, from the institution, so we’ll have to wait to see how that plays out.”

Following the meeting, Lischke said, he reached out to President Shirley M. Collado and anticipates her support and feedback. Lischke said the team plans to meet three to four times this semester, with the hope of an update of the solar panels’ energy production in January.

Susan Allen-Gil, professor in the Department of Environmental Studies and Sciences, said she is pleased about the presence of the solar panels and the college’s shift towards renewable energy, but that she remains skeptical in terms of its effect on members of the campus community.

“I don’t think that the percentage we’re getting from it is high enough,” said Allen-Gil. “I think the fact that it’s off-campus makes it invisible to most students and most visitors.”

Senior Georgia Caplen, program manager of Eco-Reps — a group of students who promotes sustainable behaviors on campus through the Resource and Environmental Management Program — said because of the distance between the solar farm and the college, it is difficult for members of the campus to have a connection with the project. However, Eco-Reps plans to unveil events and programs to involve the campus community more with sustainability efforts, such as monthly themes involving health, energy, and waste, she said.

“In previous years, it has been difficult and challenging connecting all of those different departments and to get the idea of sustainability in people’s minds, especially in departments that the majority of the time, aren’t associated with sustainability,” she said.

Along with the solar farm, the college was considering solar rooftops and solar coverings for parking lots, but these are 20 to 35 percent costlier than the solar farm itself. The college was also approached with an estimate for wind turbines, but it was not feasible in terms of the price or location, Lischke said.

The production data for the solar farm is available online for public viewing, along with information regarding the college’s impact on the environment as a result of the panels.

With the projected success of the solar panels, Lischke said he is confident in the college’s future long-term endeavors with sustainability.

“I’m hopeful of the ability to do another solar farm here within the next few years,” Lischke said.