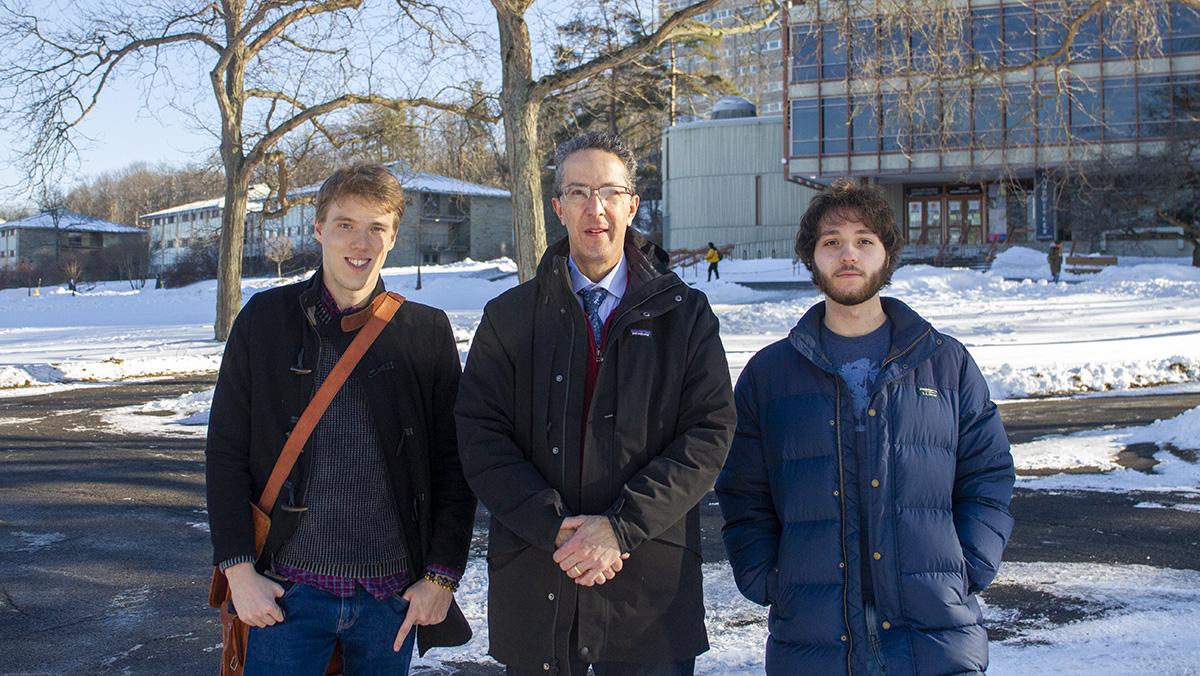 Malik Clement/The Ithacan
During the 2022 Model European Union (EU) simulation, Ithaca College students came together with students around the world to draft EU policy in response to the ongoing Russia-Ukraine crisis, among other things.
By Olivia Stanzl — Assistant News Editor
Published: February 1, 2022

During the 2022 Model European Union (EU) simulation, Ithaca College students came together with students around the world to draft EU policy in response to the ongoing Russia-Ukraine crisis, among other things.

The Global Model European Union is a simulation of the European Union and a collaboration between universities around the world. In January 2020, the Model EU was held in Brussels, Belgium. However, in April 2021, the Model EU was held virtually due to the COVID-19 pandemic. This year, hopes for an in-person Model EU in January 2022 had to be abandoned due to the rise of the Omicron variant. The event, which took place Jan. 13–15, brought together 70 students from countries like the United States, Germany, France, Bulgaria, Morocco and Romania.

Juan Arroyo, assistant professor in the Department of Politics, has been taking Ithaca College students to Model EU events since 2010. He recruits students and gives them background on their assigned roles, like foreign affairs ministers of countries including Estonia and France, so they are effectively able to play them. For about four years, Arroyo has been co-organizing the event.

One of the most urgent issues discussed during the Model EU was the extremely high tensions of the ongoing Russia-Ukraine conflict. Since late 2021, Russia has amassed over 100,000 soldiers on its border with Ukraine and indicated intentions for a potential invasion.

Senior Ryan Ingerson represented Estonia’s Prime Minister Kaja Kallas in the Model EU simulation. Estonia, which is a post-Soviet Union state, would be at the forefront of a potential conflict between Russia and Western powers should a war begin.

This was Ingerson’s second Model EU event after he attended for the first time in April 2021. Ingerson said he was skeptical to take part in the event again because of the time he would have to spend on Zoom, but ultimately decided to join because of Arroyo.

“The reason I did it was to have another event with Professor Juan Arroyo,” Ingerson said. “He organizes Model EU and his effort constantly shows. He is an amazing professor and someone I consider a personal friend at this point.”

Arroyo’s position is set to be cut at the end of the 2021–22 academic year because of the Academic Program Prioritization (APP), which includes the ongoing elimination of 116 full-time equivalent faculty positions, three departments and 17 undergraduate majors. However, Arroyo plans to continue his work with Model EU after he leaves the college. Arroyo said the main purpose of the simulation is to open the eyes of students to what goes on in international organizations.

“The European Union is a very difficult entity to understand,” Arroyo said. “Students who go through this understand afterward why it takes so long to do something [pass a policy] or what it takes to sit at the table across from someone who has very different opinions on the same topic.”

Senior Julien Sobel has been an active member of Model EU for three years. Sobel said that after taking part in the simulation, he has a more cynical view of governing bodies.

“It’s really fun to do the simulation, but what it allows me to see is that a lot of these bodies are really limited, whether it’s the EU or the UN or the US Congress,” Sobel said. “That’s ironically one of the things I most get out of these conferences — the very sort of concrete feeling of what the limitations are.”

In the European Union, every policy must be passed by a unanimous vote. Between the 27 countries that make up the union, the union proposes laws, manages the budget, implements decisions and issues regulations.

The first day of the simulation passed an extension of a travel ban on key Russian government officials and oligarchs for six months.

“Currently, there’s a list of travel bans on political figures, oligarchs and military officials, from Russia into the EU,” Ingerson said. “Representing Estonia, we moved to expand that list and make the penalties higher for Russian people of importance violating those decisions.”

Senior Mark Gravina said he decided to take part in Model EU in early January. Gravina experienced Model EU for the first time and played the role of the foreign affairs minister of Estonia. He said the main discussion he was involved in was regarding Russia.

Arroyo said it is important for simulations like Model EU and Model United Nations to continue.

“The creative writing people do creative writing,” Arroyo said. “The scientists, the chemists and the physicists, they have their labs. And the physical therapists see patients and help people on the Ithaca College campus. But politics and history students don’t have many opportunities like that, and this is one for them.”

Ithaca College’s Model European Union team helped run, and was recognized at, a conference last week that drew delegations from around the world.