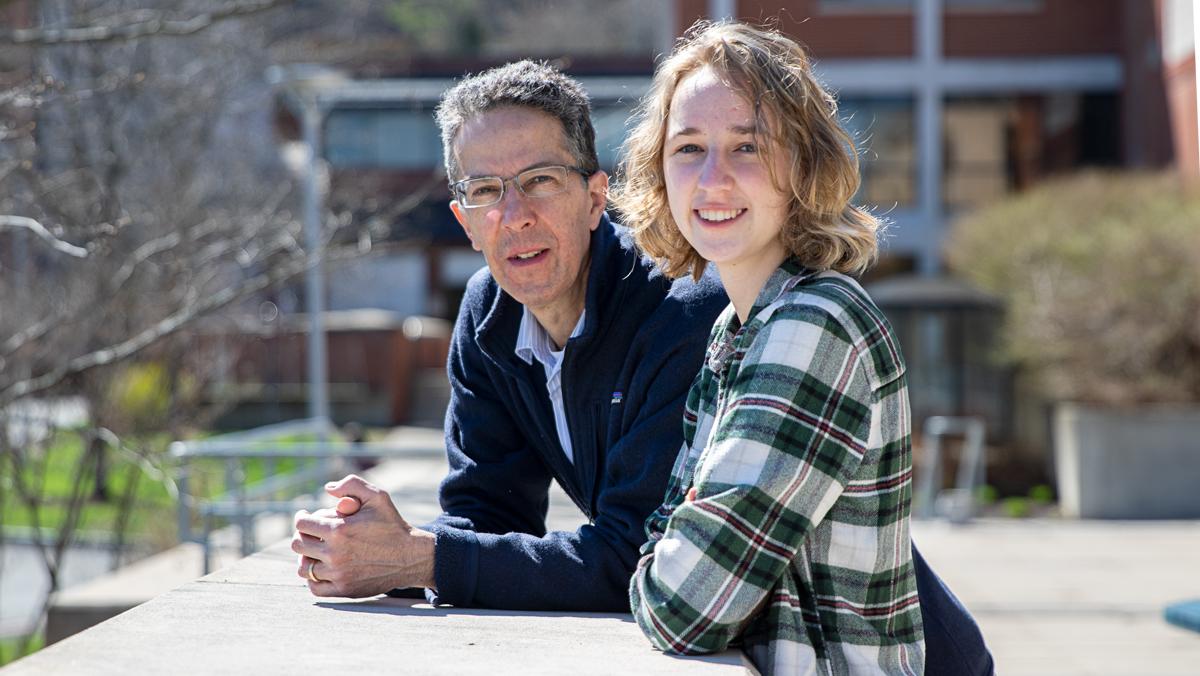 Ash Bailot/The Ithacan
Junior Ana Maria Arroyo has lived in Ithaca, New York, her entire life and is now an environmental studies major at Ithaca College. Her father, Juan Arroyo, assistant professor in the Department of Politics, started teaching at the college in 2001. His position is set to be cut.
By Jillian Bleier — Staff Writer
Published: April 15, 2021

Ithaca College announced April 14 that terminated employees who have a dependent enrolled at the college will continue to receive full tuition benefits for the duration of the students’ enrollment, not exceeding eight semesters.

La Jerne Cornish, provost and senior vice president for academic affairs, and Hayley Harris, vice president for human resources and planning, made the announcement in a letter to faculty. The letter was in response to a resolution from the Humanities and Sciences (H&S) Faculty Senate requesting support for faculty and staff terminated as a part of the Academic Program Prioritization (APP).

Students with parents employed full time by the college are eligible for dependent tuition remission. Tuition remission is a benefit available to employees, dependent children and spouses or domestic partners. Benefits only extend to tuition, leaving room and board and other fees up to the employee. Full-time dependents who qualify for tuition remission may take between 12 and 18 credit hours per semester and up to 149 credit hours total.

The current policy for tuition remission states that benefits continue through May 31 of the following academic year after the employee’s termination.

The April 14 letter also stated that terminated faculty will retain access to Netpass, email and library privileges for 12 months following their termination date. Terminated employees will also have access to job search and retraining assistance through Express Employment Professionals and Workforce NY free of charge. The letter states that the college will reach out to faculty and staff whose positions have been terminated when looking to fill positions but cannot guarantee that they will have preferential treatment as candidates.

“While we are limited by laws, regulations, budget and administrative burden in what we can offer during this time of transition, we have made every effort possible to support the valued faculty and staff members who have served Ithaca College so well,” the letter stated.

Heather Brecht, lecturer in the Department of Communication Studies, has two children currently enrolled at Ithaca College. The Academic Program Prioritization Implementation Committee (APPIC) has recommended the communication studies major be eliminated, outlined in the “Shape of the College” document.

She said her family did not previously receive any tuition remission benefits as she was only a part-time employee, even though she has taught at the college since 1995. However, she said that both of her children do receive scholarship money from the Ithaca Heritage Grant due to her being an Ithaca College alum.

“We just get told, ‘Thanks for being here, but we’re not giving your kids any tuition,’” she said.

Heather Brecht said that the money she earns from the college goes back toward paying tuition for both of her kids and that not having that paycheck will make a difference in her family’s finances.

“I feel that I am very much in a state of limbo in terms of how to replace that income,” she said.

Freshman Brooke Brecht said her mom does a lot financially to help her and her brother, senior Paul Brecht, get through college.

“It does stress me out a little bit just to know that she is losing her source of income,” she said.

Paul Brecht said his family is lucky to have that scholarship money and is privileged financially in a sense, but his mom losing her job adds another complication to the family’s finances.

Claire Gleitman, women’s and gender studies coordinator, professor in the Department of English and president of the Humanities and Sciences (H&S) Faculty Senate, worked with other senate members to draft the resolution asking the college to support terminated faculty and staff. In the resolution, the senate advocated for extending tuition remission benefits to dependents of faculty and staff who are being cut even once their parent is no longer working at the college.

“Expecting that their children could go to IC tuition-free might have prompted them not to put away large amounts of money for a future college education because, understandably, they did not think they needed to,” Gleitman said via email. “We should not add on to the catastrophe of a sudden job loss the further catastrophe of being unable to send one’s child to college.”

Heather Brecht has also taught at Dryden High School for 30 years, and she said she feels lucky to have that additional source of money.

“There are a number of people I know for whom the Ithaca College job is their only source of income, and for those people my heart is absolutely breaking because I don’t know what they’re going to do because there are so many places that are just not hiring right now,” she said. “For those people, I am super worried.”

Junior Ana Maria Arroyo has lived in Ithaca, New York, her entire life and is now an environmental studies major at Ithaca College.

Her father, Juan Arroyo, assistant professor in the Department of Politics, started teaching at the college in 2001. His position is set to be cut.

Ana Maria Arroyo said that without the financial benefits her family receives due to her father working at the college, she most likely would have gone to a local community college instead.

“My family just doesn’t have that much more for college, so being able to stay here, live at home and get the tuition remission from my father pretty much sealed the deal,” she said.

Juan Arroyo said the loss of his salary from the college will take away about 40% of his family’s income.

“I’m sure I could find something, but nothing is going to replace this kind of full-time job with benefits,” he said.