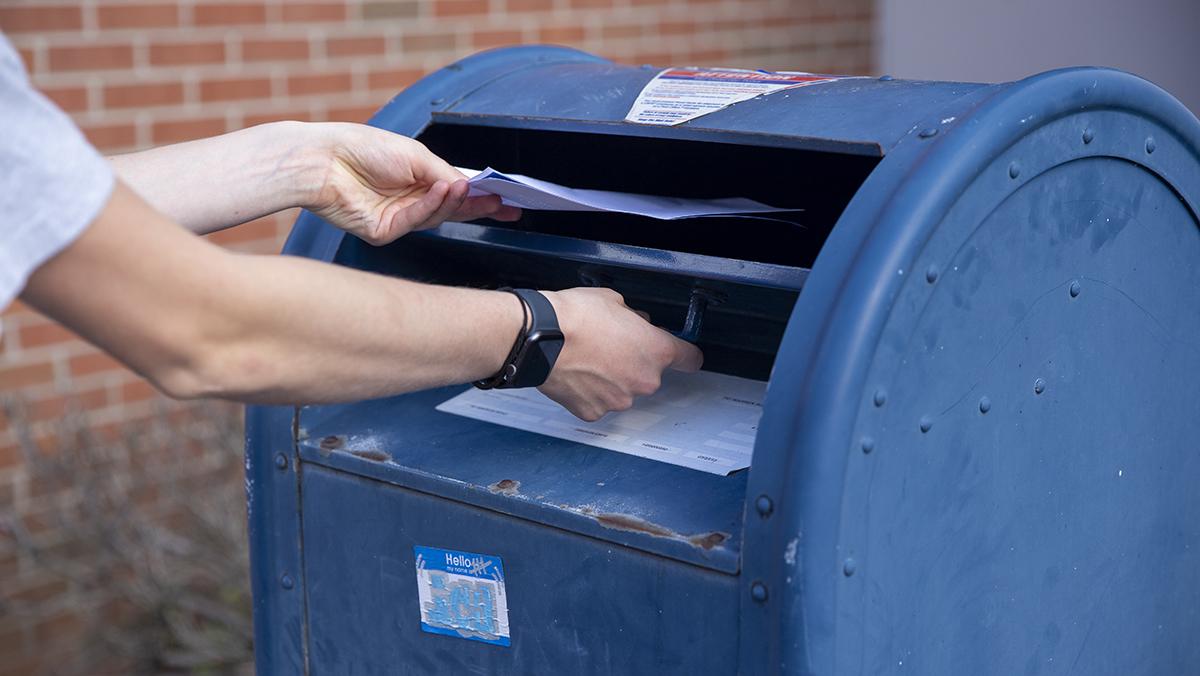 Photo illustration by Grace Vanderveer/The Ithacan
Some students at Ithaca College are concerned about using the college’s mail services to receive and send their mail-in ballots to their state or local election offices for the Nov. 8 midterm elections.
By Kai Lincke — Contributing Writer
Published: October 19, 2022

Some students at Ithaca College are concerned about using the college’s mail services to receive and send their mail-in ballots to their state or local election offices for the Nov. 8 midterm elections.

Students who attend college out of state or out of their congressional district are permitted to use absentee voting to participate in elections. Absentee voting allows individuals to submit their ballots by mail or ballot drop boxes in state and federal elections if they cannot vote in person on Election Day. Each state has different timelines for sending and returning mail-in ballots; some states require ballots to be received by Election Day and others will accept them up to two weeks after Election Day. No matter the deadline, all ballots must be returned on time to be counted.

According to the MIT Election Lab, mail-in voting doubled from 1992, when 10% of voters cast their ballots by mail, to 2018, when approximately 20% of voters returned their ballots by mail. In the 2020 presidential election, mail-in ballot use increased by about 30 percentage points because of the COVID-19 pandemic. Almost 50% of votes were collected through mail-in ballots. More specifically, according to the Pew Research Center, 44% of voters ages 18–34 voted by mail in the 2020 presidential election.

Sophomore Charles Vargo, who is from Bridgewater, New Jersey, said that he voted by mail from campus last year. Vargo said his ballot was first delivered to his home address, and his mother mailed it to him at the college. He said he received his ballot in a mail locker five or six days after his mother mailed it, which is longer than he thinks it should have taken.

Vargo said he did not plan to vote by mail again this year. He said he was concerned that his ballot would not reach the election office on time, so he decided to vote early over fall break. According to the National Conference of State Legislatures, early voting is available in 46 states.

“Ithaca mail [center] is known to be understaffed and a bit slow,” Vargo said. “They’re a week behind in getting us our packages. I think they’re just so understaffed, they can’t really get all the stuff they need done.”

First-year student Elle Wilcox said that she plans to vote by mail for the first time in the November election. Wilcox said she has previously voted in person. Wilcox said she is concerned that her mail-in ballot will not reach her local election office in Saratoga on time if she uses the campus mail system. Wilcox said sending mail from the college can also be slow and she has mailed letters from a U.S. Postal Service (USPS) mailbox on campus that have taken over a week to be delivered.

“I would consider actually going and mailing it from the postal office downtown … to just see if that would be faster and more accurate with where it’s sent,” Wilcox said.

Golden said that students should be mindful of the USPS shipping times when they return their ballots and mail them as soon as they can.

“Students should take note of the fact that the [USPS] continues to experience some delays and that it can be unpredictable at times,” Golden said via email. “They should familiarize themselves with the requirements and deadlines of their particular voting jurisdiction. If they are concerned that their ballot might not arrive on time, they should focus on completing them and posting them as quickly as possible, rather than pinpointing a final deadline for when they can still post their ballot.”

According to the USPS, mail-in ballots were received by election officials an average of 1.6 days after they were mailed by voters during the 2020 election and 1.4 days during the 2021 election. The USPS recommends that voters mail their ballots at least one week before their state’s deadline to ensure that they arrive at their election offices on time.

Golden said via email that students who are concerned about their ballots being mailed quickly should drop them off at the mail center by 3 p.m. on weekdays to ensure same day pickup by the USPS. The USPS also collects mail from the USPS mailbox in the U-Lot near the Campus Center every day.

Senior Erin Gallagher said that mail-in voting can be confusing, but it is important for college students to learn about the process so that they can participate in the election.

“I think that honestly, just educating yourself is the biggest way to be more involved and more present in the political atmosphere,” Gallagher said. “There’s really no excuse not to be voting. They say it’s your civic duty, and that’s true. If you are complaining about something, it’s probably in some way linked to politics and you don’t have a right to complain if you’re not doing anything to voice your concerns.”

According to the U.S. Census, 18 to 24-year-olds had the lowest voter turnout in the 2020 election, as 51.4% of eligible voters in the demographic participated in the election. According to Tufts University Center for Information & Research on Civic Learning and Engagement, many young people do not vote because they were not encouraged or taught how to vote in high school. However, according to the Institute for Democracy and Higher Education, in the 2020 presidential election 66% of college students who registered to vote did vote, an increase from 53% in the 2016 presidential election. The number of voting-eligible college students registered to vote also increased from 76% in 2016 to 83% in 2020.

Don Beachler, associate professor in the Department of Politics at Ithaca College, said that the election process can be confusing for first-time voters, especially if they are voting by mail. Beachler said students who intend to vote should ensure that they are registered before their state’s deadline.

“Don’t be turned off if you find something that you don’t understand about the process,” Beachler said. “A lot of American election law and process over the years has been designed to discourage voting by newcomers. It’s not impossible though, but just don’t be discouraged if you find some of it is confusing.”