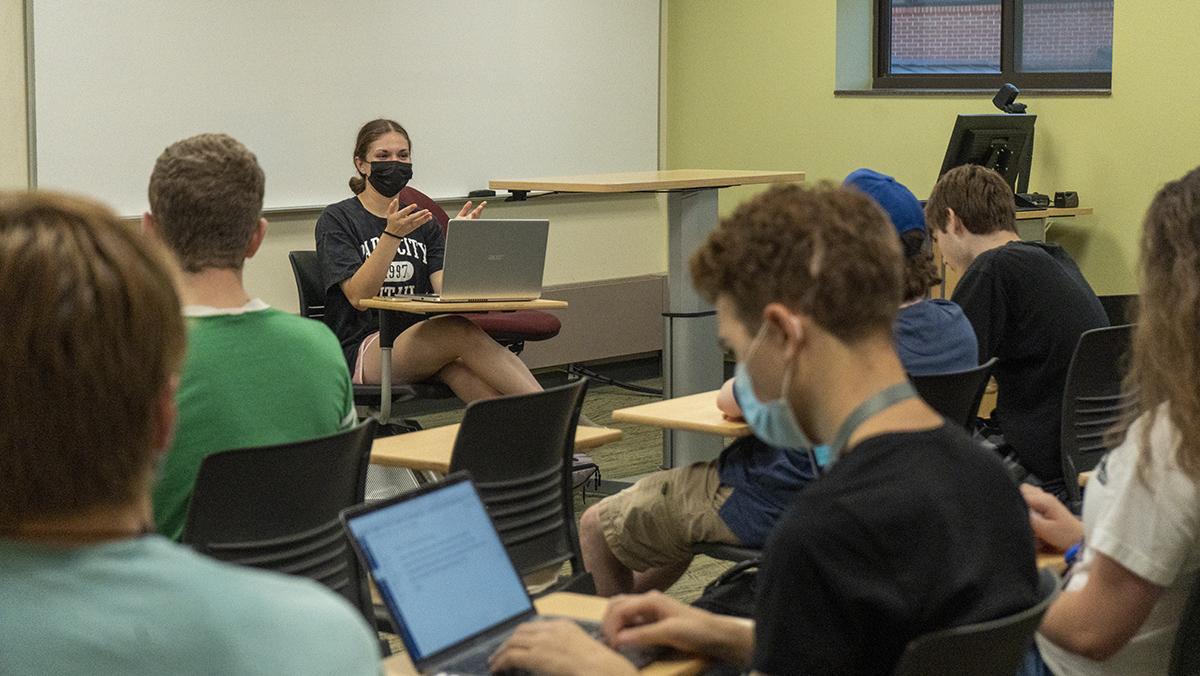 Five Ithaca College students were hired as course ambassadors in Fall 2022 to serve as mentors and role models for the two hundred students enrolled in Film Aesthetics and Analysis (FAA) in the Roy H. Park School of Communications.

Yolanda Clarke, manager of Tutoring and Academic Enrichment Services, said she developed the Course Ambassadors Program during the 2022–23 academic year and worked together with Patricia Zimmermann, Charles A. Dana professor of Screen Studies in the Department of Media Arts, Sciences, and Studies, to apply it to FAA. Clarke said another set of peer tutors — learning coaches — were applied to FAA in the 2021–22 academic year, but she and Zimmermann wanted to provide students with more support. FAA is only offered at the college’s Ithaca campus and because of the size of the class, it is being taught jointly by Zimmermann, who teaches it in person in Ithaca, and by Stephen Tropiano ’84, professor and director of the J.B. Pendleton Los Angeles Center, who teaches the course virtually from Los Angeles.

One of the ambassadors, junior Stephanie Tokasz, said course ambassadors run Learning Skills Sessions where they provide students with strategies on how to be successful when taking exams and help them with any questions they may have. FAA students are divided equally and assigned to each of the five ambassadors. She said ambassadors also host drop-in hours once a week and sit among students during the class on Monday nights.

Clarke said the goal of this program is to give first-year students more access to resources that will not only help them with FAA specifically, but will also be a worthwhile guide for first-year students as they get adjusted to college academics. She said the program is already being expanded to other classes as an ambassador was recently hired for Sociology 101 for Fall 2022.

“We know that there’s a different population of students that’s coming from high school, we know that COVID compromised probably their opportunities during that time, and so we wanted to give students more,” Clarke said.

The course ambassadors are not the first or only set of peer tutors at the college. Learning coaches preceded them and are still active on campus. Tokasz said course ambassadors and learning coaches differ from teaching assistants as they are more focused on helping students with learning and studying skills, whereas teaching assistants are more focused on course materials.

Tokasz said she worked as a learning coach for FAA previously and said that while her role as an ambassador has not changed much, there are some differences. She said that as a learning coach, instead of running both Learning Skills Sessions and drop-in hours, she ran Learning Cooperatives, which focused on helping students prepare for midterms, finals and writing papers.

Usually, a small number of students attend to ask questions and leave soon after. The students would have to sign in and learning coaches would send their names to the FAA professor. Tokasz said Learning Skills Sessions are more structured as students tend to stay longer compared to Learning Cooperatives, and instead of just reporting back names, ambassadors tell the professors questions students asked so they know what to review with students. Ambassadors also email students in their respective cohorts to remind them of when Learning Skills Sessions and drop-in hours are held.

Tokasz said she also attended classes as a learning coach but only for one of the two class sections. She said now the class only has one section, which makes it easier for ambassadors to retain information in order to answer students’ questions better. She said ambassadors also take notes during classes to set an example for students.

Tokasz said she was supported by learning coaches when she was a first-year student and wants to provide that same support to the current FAA students.

“When I got the email that they wanted me to do it, I was like, ‘Oh my gosh, of course,’ because they had an influence on me when I was a freshman,” she said.

Another FAA ambassador, junior Guadalupe Fanelli, said she has had an enjoyable experience working with students so far and has noticed their eagerness to engage in the sessions.

“Students are really curious so they bring a lot of questions; they’re excited to learn and you can tell that they’re motivated to study and work for the class,” Fanelli said.

Fanelli also said she has already been receiving positive feedback as FAA students she has talked to outside of sessions have tried out different techniques she has suggested.

Zimmermann said the differences in learning between high school and college are significant. She said in college, especially in a class like FAA, the work can be very theoretical and analytical, which encourages students to think more critically than they have before. She said that learning and studying behaviors that may not seem significant at first, like the proper way to take notes or being proactive about checking Canvas or syllabi, are vital for students to be successful academically.

“They’re terrific role models for how one can go to college. … They are serious, dedicated students who put their classes first,” Zimmermann said. “They work to augment what we’re doing, they work to help students transition out of high school.”

Tropiano said the effort the course ambassadors are putting into collaborating with not only the students but also with him and Zimermann have helped them to understand the needs of their students better.

“The ambassadors are great because they’re doing a lot of work and taking this very seriously,” Tropiano said. “They really have made themselves available to the students.”