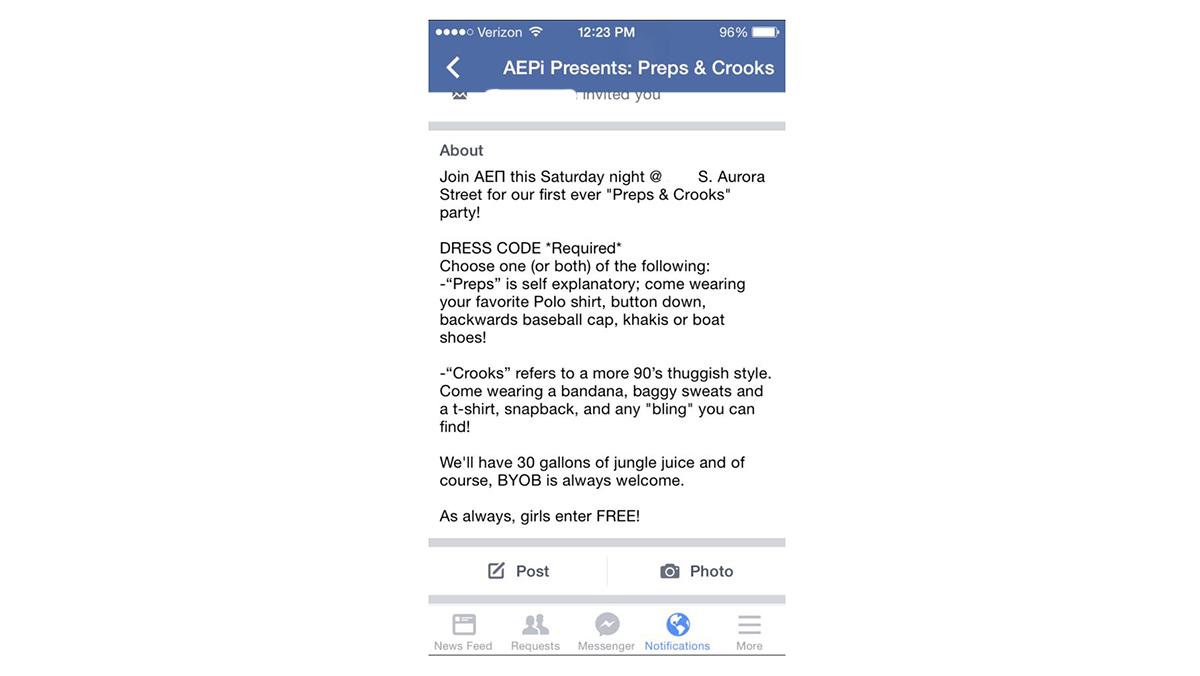 A screenshot of the event description is above. The name of the person inviting students to the event and the address of the party have been removed.
By Max Denning — Assistant News Editor
Published: October 21, 2015

Ithaca College students and alumni have been expressing frustration on social media after an unaffiliated fraternity at the college sent out a Facebook event Oct. 9 for a party with what they are calling a racially charged theme.

The unaffiliated fraternity Alpha Epsilon Pi advertised the event as a “Preps & Crooks” party to be held the night of Oct. 10 on South Aurora Street. The Facebook event for the party stated the dress code is a required choice between “Preps” or “Crooks.”

The event said the “Crooks” theme “refers to a more ’90’s thuggish style. Come wearing a bandana, baggy sweats and a t-shirt, snapback, and any ‘bling’ you can find!”

On the other hand, the invitation said the “Preps” category is “self explanatory; come wearing your favorite Polo shirt, button down, backwards baseball cap, khakis or boat shoes!”

There have been a number of fraternity parties at colleges and universities across the country with racially charged themes that have garnered media attention in the past two years. Most recently, the Los Angeles Times reported that students at the University of California, Los Angeles, protested Oct. 8 after the Sigma Epsilon fraternity hosted a “Kanye Western” party in which many of the attendees dressed in costumes that exaggerated racial stereotypes.

Senior Matt Constas, who lives in the house where the party was supposed to take place, said he had no knowledge of the nature or theme of the party. He said only one AEPi member lives there, and this would have been the first AEPi party hosted at the address.

Another resident of the house said none of the residents were informed of the theme of the party prior to it being posted on Facebook.

Sophomore Sophia Conger, who was invited to the event, read the description and thought it was problematic.

“I just didn’t like the way they defined what a Crook was,” Conger said. “I thought there were a lot of racist, sexist undertones with the event.”

Conger then sent a screenshot of the event’s description to sophomore Nadja Perez. Perez said she thinks the event showed a lack of education on part of the members.

“I don’t think they’re racist people, but they need to be a lot more educated if they’re going to be throwing big parties,” Perez said.

Perez said the description would have inspired a certain type of dress.

“They might not have said stereotypical black person or stereotypical white person, but that’s what people are going to be dressed as,” Perez said.

Multiple students started using #POCatIC on Twitter and Facebook Oct. 12 and have called for the college to hold the members of AEPi accountable.

Students have also shared their own experiences with racial issues at the college and demanded more accountability on the part of administration.

Sophomore Daniella Resto said she was frustrated by the event’s description. She said she didn’t think the group was intentionally trying to describe African-American males but felt it was an attack on the minority community.

Resto said she was frustrated with ongoing racial issues at the college.

Perez said she has friends in the fraternity.

“I’m upset because they should know better,” Perez said.

Perez said she doesn’t want the organization to be shut down, but she said the members need to understand what they did was wrong.

Benjamin Rifkin, provost and vice president for educational affairs, released a statement, which stated said the college recognized the “destructive impact” the message can have on members of the community.

“The posting used language that was reprehensible for its racial and class stereotyping,” Rifkin said in the statement. “The views expressed in this posting are antithetical to the college’s commitment to respect and inclusivity.”

Rifkin added that the group is not affiliated with the college, as the college has no social fraternities and has no plans to allow any. He discouraged students from participating in “any event designed around principles antithetical to our community’s commitment to respect and inclusivity.”

Multiple students at the college who are members of AEPi did not respond to requests for comment. A former member of AEPi left the organization after the incident and wrote an open letter, which expressed regret about what happened and invited discussion.

AEPi is not affiliated with the college, which dissolved fraternities and sororities after a student’s death in 1980. In February 2014, The Ithacan reported that the fraternity was founded in the Town of Ithaca in 2012 and had 43 brothers at the time.