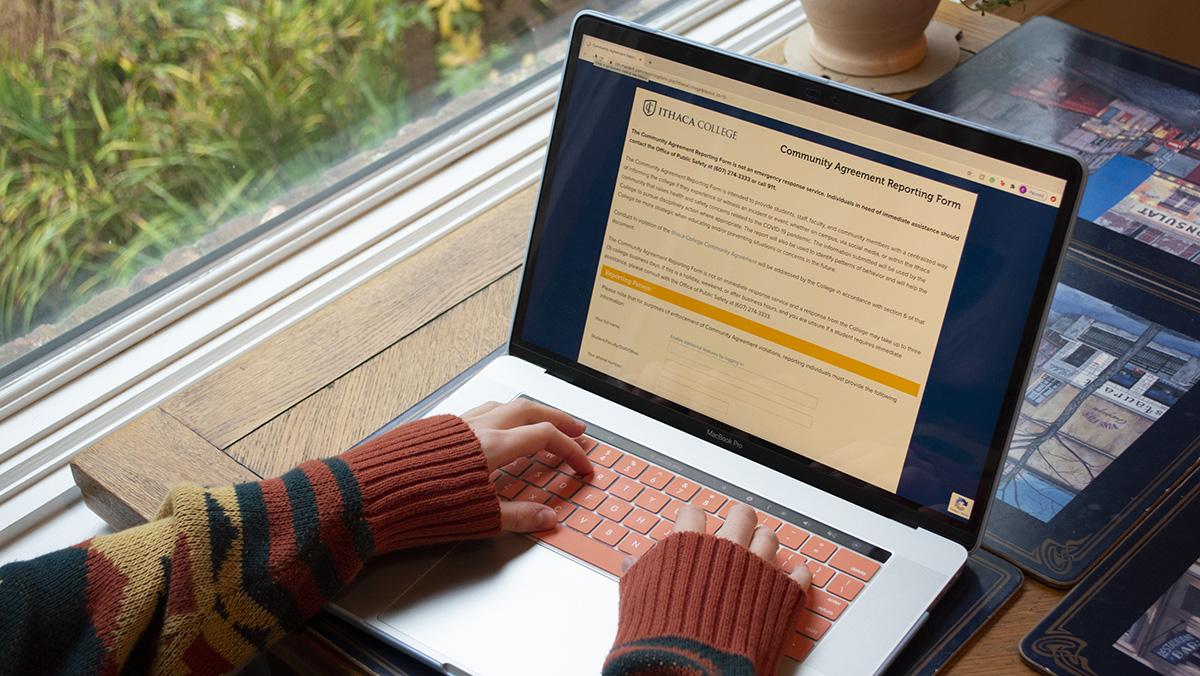 During a typical academic year, a large group of students playing basketball would not break any college rules or attract any attention. However, this year, large groups and parties of unmasked students are part of a list of community violations that pose a danger to the wider community because of the COVID-19 pandemic.

Ronald Trunzo, associate director of the Office of Residential Life and the Office of Student Conduct and Community Standards, said that since Jan. 1, there were 115 people who used the Community Agreement Reporting Form to report violations. That form can be used by anyone on or off campus, whether they are students, staff, faculty or community members. He said there were 122 reports from the Resident Assistant/Apartment Assistant General Conduct Report and 253 reports from the Testing Non-Compliance Reporting Form, meaning students neglected their twice-weekly COVID-19 testing.

During Ithaca College’s in-person semester this spring, the Office of Public Safety and Emergency Management received 11 community violation complaints — one off campus and 10 on campus. There were at least eight other calls to Public Safety about mask–wearing that were classified as Student Conduct Code or drug violations, according to the public safety activity logs.

Between Sept. 1 and Nov. 21, 2020, when the college was open for remote instruction, there were 40 reports made using the Community Agreement Reporting Form. Submissions were sent in by students and faculty as well as members of the wider Ithaca community.

Trunzo said residential life staff have been working to educate students about COVID-19 guidelines to ensure that they are followed and understood by the campus community.

“While the reporting numbers might seem high, the good news is that we have kept the number of positive COVID cases to a very small number,” Trunzo said via email.

Throughout the spring semester, the college has eased some of its stricter COVID-19 guidelines. At the beginning of the semester, students were not allowed to enter each other’s dorm rooms or enter dorm buildings other than their own. The college started allowing students to go into other dorm rooms on their floors March 1. Starting March 15, students could access rooms on other floors in their buildings. Since then, there has not been any more loosening of residence hall COVID-19 guidelines.

The college also announced April 15 that students who are two weeks past their second shot of either the Moderna or Pfizer shot or two weeks past their Johnson & Johnson shot no longer have to participate in twice-weekly surveillance testing. Fully vaccinated students also do not need to quarantine after being exposed to a COVID-19 positive person as long as the exposed person is asymptomatic.

“Confronting community violations can also be a bit intimidating,” Abreu said via email. “Thus, RAs were encouraged to use their best judgment when dealing with these sorts of situations, such as consulting with the Resident Director on duty or other Resident Assistants on call.”

He said RAs had extensive training on confronting community violations prior to the semester’s start. That, tied with his two years of experience as a RA, alleviated any health and safety concerns he might have had in addressing violations.

“All in all, the college has handled the living and learning environment tremendously well,” he said via email. “Of course, there are some things that they could have done better, but the fact that we were able to get through the entire semester without a major outbreak is a testament to how successful we’ve been this semester.”

Sophomore Alexa Spinnato said she lives in Rowland Hall and has seen many freshmen playing basketball in the Upper Quads without masks.

“A lot of the guys play basketball outside my building with zero masks on, and I know that they’re not in a quarantine bubble because I see different people playing basketball every day,” she said.

Dunn said it is possible that the presence of Public Safety officers could prompt students to put on masks or disband a larger group. He made an analogy to noise complaints, in which a student may report loud music playing, but it can be difficult to substantiate when officers appear on the scene.

“To be quite honest, it’s handled and addressed similarly to other violations of the standard conduct code,” Dunn said. “So our officers respond, we identify who’s there with what’s occurring, and then we write a report. We are not the adjudicators of the violations. We document what we find.”

Sophomore Meredith Robbins said she has seen people post on social media that they are traveling outside of Tompkins County. Robbins said she also saw students travel to other states in late March, despite the college not having a spring break during the semester.

“I kind of feel like it’s not my place to comment on what other people are doing, even though I know it does affect the wider campus community,” she said. “It feels like a lot to say, ‘I saw you traveled outside the county. That’s not allowed. You should be quarantining.’”

Robbins said she never used the Community Agreement Reporting Form because she had heard rumors that it was not completely anonymous.

“I can’t help feeling like a snitch, even though I know it’s for the best,” she said.

At colleges across the country, many students have to decide whether to report their peers or not. A Cornell University student posted a video of a party on Snapchat in September, and students called for people to hold their partying peers accountable. However, many students said that “snitching” on their peers was uncomfortable, according to the New York Times.

Sophomore Emma Johansen also said she was aware of the reporting form but has not used it.

“I’ve seen people say that it’s not actually anonymous, which makes a lot of people really uncomfortable because they don’t want to be known as the person who ratted someone out even if it is for a good reason,” she said. “It’s very alienating.”

“A few times I’ve seen people go up to groups that are doing that and say, ‘You guys need to be wearing masks,’ and they just say, ‘What, we’re eating?’ when they’re actually not,” Johansen said. “So that’s upsetting.”

Although several large gatherings at Ithaca College were reported to Public Safety, it is almost certain that more large gatherings occurred that remained unreported. Junior Dean Freeman said he witnessed approximately 30 people gathered late at night in April outside of the Towers Residence Halls not wearing masks but did not report it.

“I was frankly in a bit of a rush at that time,” he said. “I don’t know if perhaps people were vaccinated, … so I wasn’t exactly sure if I want to be jumping to conclusions, but it certainly was an event which was not perhaps ideal.”

Trunzo said any reported case of a large gathering through Public Safety is sent to the Office of Student Conduct for a follow-up.

“When our staff come across or are made aware of large gatherings, they are addressed,” Trunzo said via email. “However, sometimes large gatherings can go unreported if staff are unaware of the occurrence and if students do not report it as a concern.”

Johansen said she thinks the college did the best it could to keep students safe.

“They’ve been really good about getting people into quarantine as soon as they know [someone tests positive] because even though there have been cases, there haven’t been outbreaks,” she said.

Some colleges received negative feedback for stringent punishment in response to community violations. A graduate student at the University of Illinois in Champaign, Illinois, was dismissed for failing to test regularly in accordance with the university’s community guidelines during the fall semester. Students were typically dismissed from the university for one to four semesters. Similarly, Northeastern University in Boston drew attention for dismissing 11 freshmen in violation of public health protocols prohibiting crowded gatherings.

Robbins also said she felt the college has done the best it can given the circumstances. She said she felt that if restrictions were tighter, students might have felt like they were being policed. Some experts said colleges cannot blame students for potential outbreaks, as it is up to the colleges themselves to set the standard for what students need to do to keep each other safe.

Spinnato said that testing protocols and containment of positive cases have been going well but that she thinks the college should not have expected everyone to completely follow the community agreement.

“You’re really going to think that college students are going to listen to [the college] after having a fall semester taken away from them?” she said.

She said she was expecting campus police officers to be outside of buildings monitoring who went in and out, ensuring that only residents of that building entered.

Dunn said he believes students did a good job of keeping each other safe this semester.

“A lot of students are behaving very well, doing what they know to do for either themselves or the Bomber Bubble or their other classmates — doing the right thing for the right reasons helps everybody,” Dunn said.