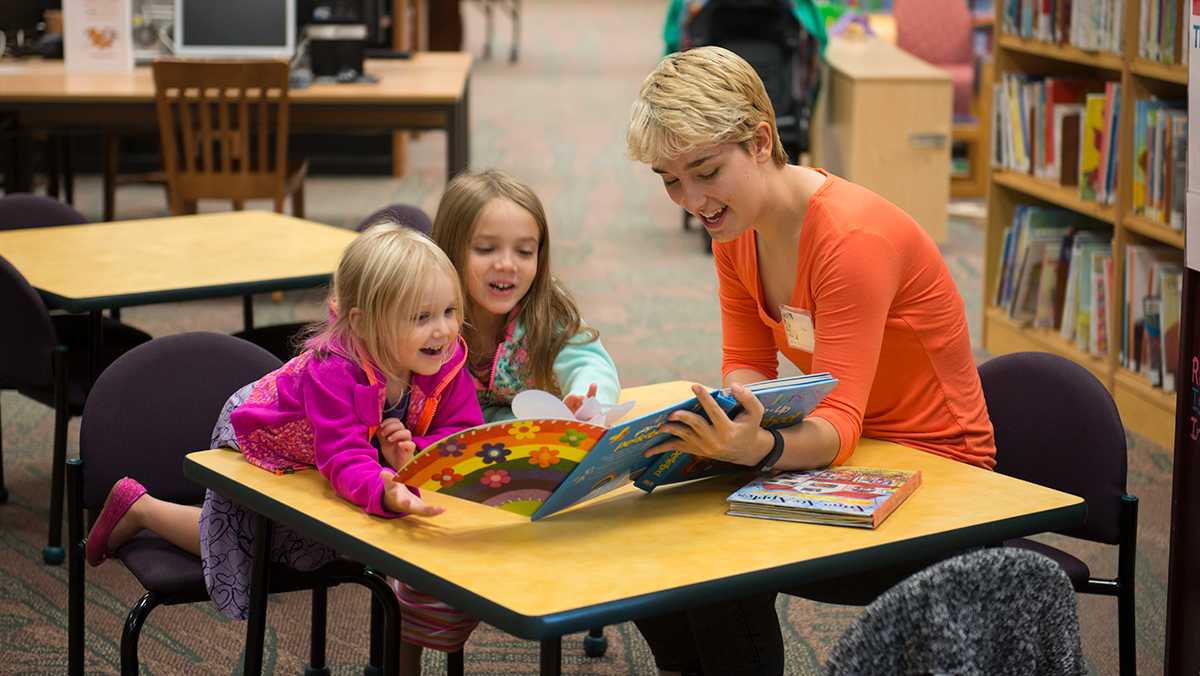 Sam Fuller/The Ithacan
From right to left, Sophomore Anna Gardner reads to 5-year-old Cecilia and her three-year-old sister, Olivia. Nearly every Thursday and Friday Gardner can be found in the children's section of the Tompkins County Public Library at a miniature desk reading to young kids — just one of many volunteer programs Gardner is a part of.
By Daniel Hart — Staff Writer
Published: October 3, 2016

Among shelves of children’s books, sophomore Anna Gardner reads to 5-year-old Cecilia and her three-year-old sister, Olivia. Next to Gardner is a sign that displays “the reader is in.”

As the trio transition to “Princess, Princess,” a pink-covered pop-up book, the sisters chat excitedly.

“Let’s be a little quieter,” Gardner says. “We have to be quiet in the library.”

Nearly every Thursday and Friday between 3 and 5 p.m. Gardner can be found in the children’s section of the Tompkins County Public Library at a miniature desk reading to young kids —  just one of many volunteer programs Gardner is a part of.

Gardner is a double major in film, photography and visual arts; and art history, with a concentration in museum studies. At Ithaca College, she is a part of the Red Cross Club, Women in Communications, IC Feminists United, VIC Radio and the Honors Program, and she works for the Handwerker Gallery. She was also a New York Women in Communications scholarship winner last year and works on campus as the student assistant in the Office of the Provost as well as the special events manager for The Studio, a film and transmedia studio run by the Roy H. Park School of Communications in downtown Ithaca where students from the college can work and collaborate.

At The Studio, she works with a small team to interview film producers and organize volunteers for Ithaca Fantastik, an annual film festival in Ithaca in November centered around genres such as horror, science fiction and “wacky, weird films.” She said horror is one of her favorite genres, and, like horror, she thinks she takes time to get used to.

“Once people come to appreciate it they’re like, ‘Wow, this really isn’t that strange after all. We really love this,’ and I feel like I’m very the same way,” she said.

She grew up in Brainerd, Minnesota, but said she was itching to leave her hometown, which she felt was not diverse or conducive enough to broadening her perspectives on the world.

“I didn’t grow up in a very cultured place. People were pretty prejudiced where I was at, and I grew up with that mindset I think, too,” she said.

Originally interested in music composition, Gardner attended the McNally Smith College of Music in Minnesota for her junior and senior years of high school before she decided film analysis was more for her.

But it was not until her senior year of high school when she volunteered at the Veterans’ Affairs Medical Center of Minneapolis, that she learned community service could be so valuable to her.

Don Austin, assistant director of community service and leadership development in the Office of Student Engagement and Multicultural Affairs, said he noted her mature view of community service her freshman year during her alternative spring break to Salamanca, New York, where students worked with children in the Salamanca Youth Center. He said while many students at the college had challenges working with children from difficult or unsafe homes, Gardner went out of her way to make her peers feel comfortable working with the children in the youth center.

“She understands not only the value of service to community members,” he said, “but Anna also understands how service is integral to a student’s learning process and their own personal and professional growth,” he said.

The drive to do more than she has time for is something Gardner has struggled with since high school.

“I’ve always filled my plate too full,” she said.

But sophomore Joe Simpson, Gardner’s good friend and roommate, said he thinks her willpower makes it possible for her to live the way she does.

Even with a busy schedule, Gardner prioritizes time to make friends. She said the conversations she has with older volunteers are some of the most enjoyable parts of her work.

“It’s really nice to have conversations with community members who have a totally different view of the area than I do,” she said.

Sophomore Madison Chlebowski, a good friend of Gardner’s, said she regularly brings her friends along with her to volunteer. For example, Chlebowski said Gardner brought her and a handful of friends to the Alzheimer’s Walk at Cass Park on Sept. 18.

Robyn Wishna, lecturer in the Department of Media Arts, Sciences and Studies, taught the Introduction to Photography course that Gardner took last year. She said it is not the quantity of Gardner’s contributions to the community that brings her opportunities, but her genuine interest in learning from her experiences and people she meets.

“She’s a very curious person,” Wishna said. “She has certain things in her heart that she’s passionate about, and I think one of them is human rights.”

In the community, Gardner said she feels that people welcome service with open arms — one of the many reasons she said she values the college and the town.