Incoming students get acclimated before start of semester 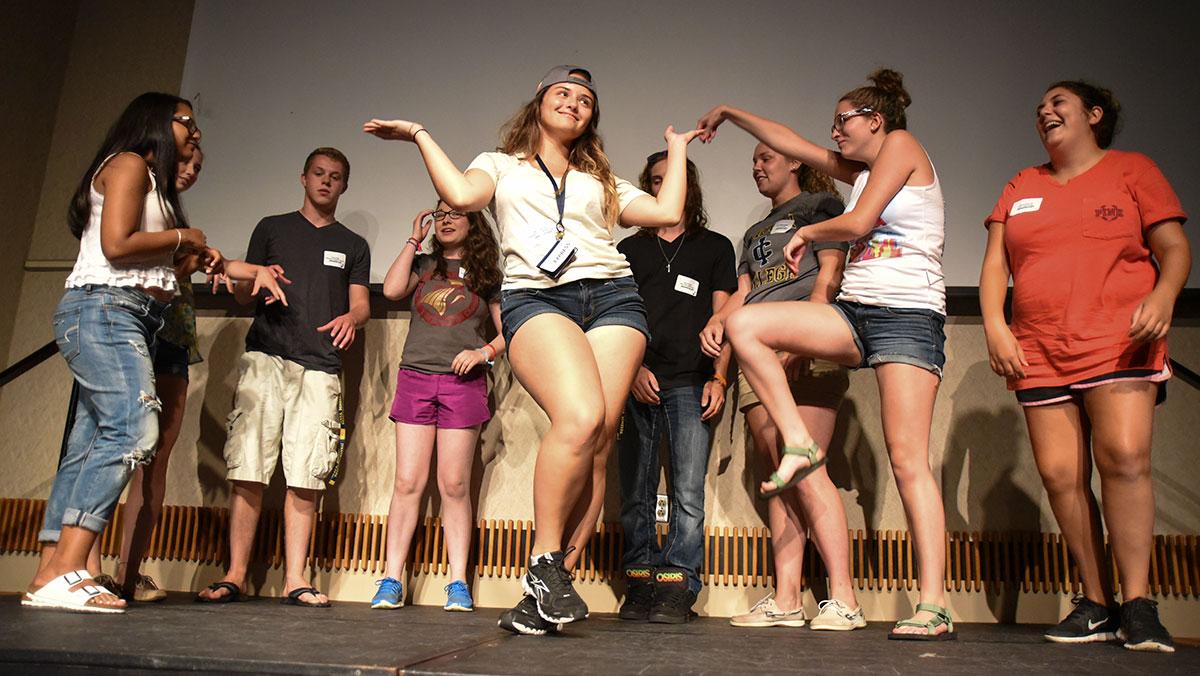 Instead of relaxing at home for a few extra days, eight Ithaca College students spent the week before classes organizing stacks of books, cleaning a playground and painting walls at the Waldorf School in Ithaca. Their service was a part of Jumpstart, a pre-semester program intended to introduce new students to the Ithaca community.

For over 18 years, the college has hosted Jumpstart as a way to ease the transition into college life for freshmen. Students chose from three different programs based on what type of experience they hoped to have: Community Plunge, Lead-In or the Gardening, Recycling, Eating, Enjoying Nature Tour. Each has its own focus and activities based on a specific theme: Community Plunge focuses on local volunteer activities; Lead-In focuses on team-building and leadership training; and GREEN Tour focuses on participation in the local agricultural community. This year, Experiencing Connections by Heading Outdoors was not offered because there were not enough professional staff members for the program, Theresa Radley, assistant director of student leadership and involvement in the Office of Student Engagement and Multicultural Affairs, said.

Sophomore Marieme Foote served as a student leader for Community Plunge this year after enjoying her time as a participant last year. Student leaders are upperclassmen who work with freshmen to help them feel welcome in their first few days at the college. Foote, who led her group at the Waldorf School, said in addition to moving in early, Jumpstart offers many benefits to students.

“Jumpstart is so important because it helps to introduce first–years into the Ithaca College area and encourages them to seek out other opportunities to volunteer in the community long after the program is over,” Foote said. “This program really gives new students a better look at Ithaca and helps them get acquainted to the new experiences they will be receiving at Ithaca College.”

From selecting activities to reserving rooms to choosing student leaders, Jumpstart organizers spend the entire year planning the program, Radley said. Having worked with Jumpstart in some capacity since her second day at the college five years ago, Radley said she is a big supporter of the program and the opportunities it provides.

“From the participants’ perspective, it’s that first opportunity to make [a] real connection with people and the campus,” she said. “No matter what program they are participating in, they are learning something about themselves — learning about the Ithaca area. They get that quick sense of home.”

Students taking part in the Lead-In program participated in team-building and leadership activities, including the Hoffman Challenge Course, a series of low and high ropes activities, through the Cornell Team and Leadership Center. The goal of Lead-In is meant to provide students with the resources and confidence they need to become leaders on campus, and Radley said it also leads to new friendships.

Sophomore Dakota Collina, a student leader for Lead-In, said the Hoffman Challenge Course is a crucial part of the program.

“The challenges work to build trust in oneself and those around you that you may have only known for a few days,” he said. “With the ropes course welcoming many different groups of people throughout the year, Lead-In truly stands out in being a group in which every participant wants to gain something.”

Radley pointed to a group of students who participated in the Lead-In program four years ago who are still friends today as an example of how Jumpstart can be an early, comforting space for freshmen.

“That’s the goal right there — that is what Jumpstart is,” Radley said. “Four people who never knew each other came into Jumpstart, and all are highly involved in the college in their own way.”

GREEN Tour students learn about sustainability by exploring local food traditions such as the Farmers Market. The goal of the program is for students to make connections with one another as well as discuss their connection to the community when it comes to food systems.

Similarly, Community Plunge, the original Jumpstart program, allows students to explore the community through a variety of volunteer-based activities, such as cleaning up the Waldorf School.

Don Austin, assistant director of community service and leadership development, has been involved with Jumpstart for five years and is the organizer for Community Plunge. Austin said he believes Community Plunge benefits the students and community organizations.

“Fifty percent of why it’s important to me is that first-year students are coming back to campus early and learning what resources are available at the college and in the community,” Austin said.

As for the other 50 percent, he said Community Plunge also allows local organizations to complete projects they would have otherwise not have had the volunteers for.

Oftentimes, organizations that have partnered with Community Plunge in the past do so again. The Family Reading Partnership, Tompkins County Public Library, Ithaca Youth Bureau, and a mosaic mural on the wall of the City of Ithaca’s Water and Sewer Division are just a few examples of sites that have hosted Community Plunge volunteers.

Austin also highlighted other forms of service that students can become involved with throughout the year, such as Service Saturday programs, alternative break programs and service immersion programs. He said there are between 40 and 50 service-oriented organizations at the college during the year that students can join.

Senior Sean Themea participated in Community Plunge as a freshman and wanted to return as a leader for his sophomore and junior years but could not because of resident assistant training. He said he was very excited to have the opportunity this year to take part as a leader.

“I had such a good experience my freshman year,” Themea said. “I felt acclimated to the campus and the community. During my first day of doing Community Plunge as a freshman, I referred to my dorm as home, and it was just a really special experience.”