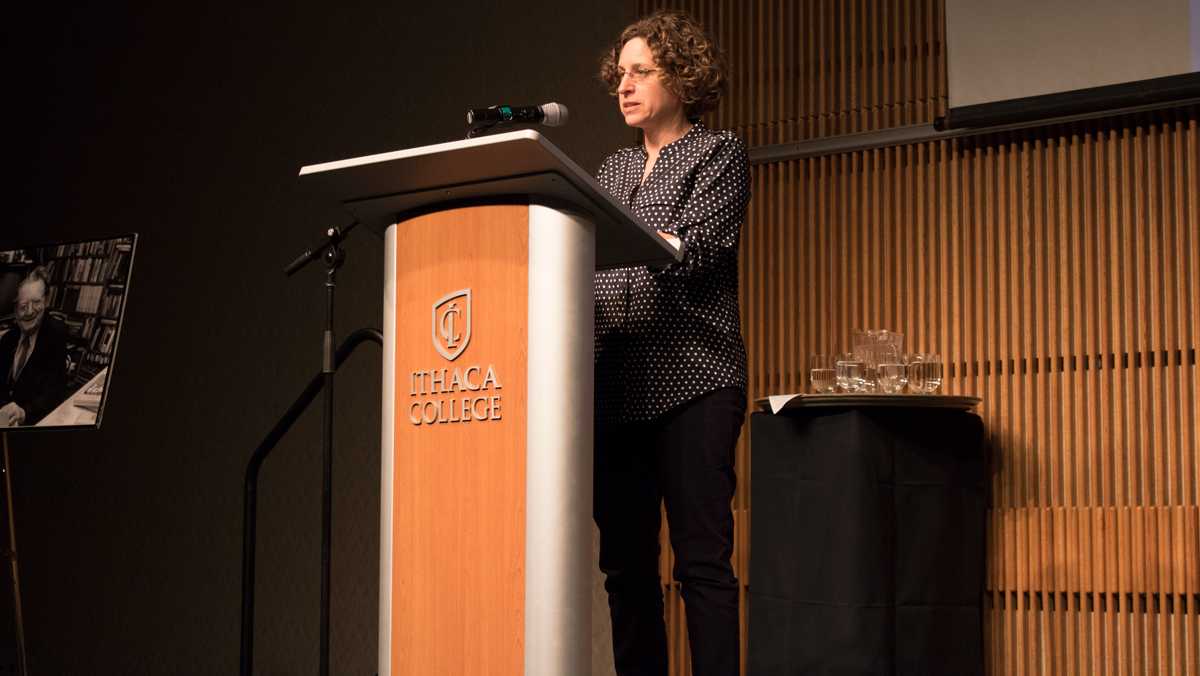 Caroline Brophy/The Ithacan
Sharon Lerner, a reporting fellow at the Investigative Fund and journalist at The Intercept, spoke after she was given an Izzy Award from the Park Center for Independent Media on April 24. Her work focuses on environmental racism and environmental negligences of corporations.
By Sam Haut — Staff Writer
Published: April 25, 2018

The 10th annual Izzy Awards were held April 24 to honor the work of journalists Sharon Lerner, Lee Fang, Todd Miller and Dahr Jamail along with the retirement of Jeff Cohen, current director of the Park Center for Independent Media.

The PCIM gives Izzy Awards to journalists for work they do at independent media outlets. The awards are named after independent investigative journalist I.F. Stone. The ceremony was held in front of a room of approximately 160 students, faculty, staff and community members, and a book signing followed the ceremony.

Cohen has worked for the PCIM as its founding director for the past 10 years and is ending his time at the college May 1. Each of the award winners took time during their acceptance speeches to thank Cohen for the work he has done for independent media while at the PCIM.

Dahr Jamail works for Truthout, where he reports on climate disruption created by the United States military both in the U.S. and abroad, as well as other threats to the environment. Jamail spent several years reporting on the war in Iraq because, he said, he did not see enough coverage being done by mainstream media.

“My work didn’t contribute to the revolution I thought it would,” Jamail said. “I’ve had to let go of the results of my journalism and find my meaning and joy in simply the doing of the work, knowing it is work for truth and justice and to what I can do to contribute to both of those things.” 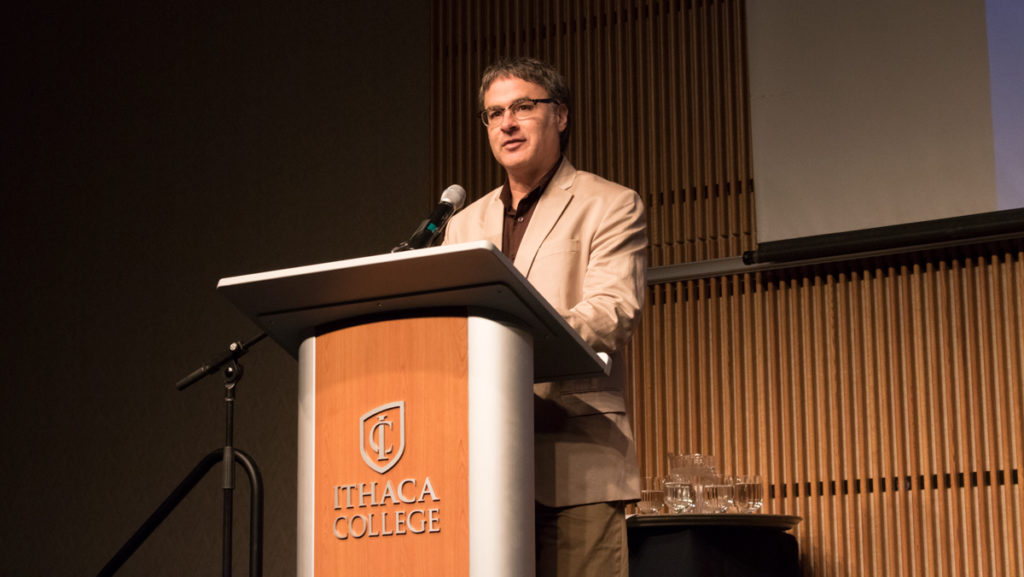 Dhar Jamail, staff reporter at Truthout, spoke about his experiences being embedded in Iraq covering environmental and other issues that have been caused by the U.S. military. (Caroline Brophy/The Ithacan)

Sharon Lerner was honored for the work she did at The Intercept about climate change and how it is affecting minority communities. Much of Lerner’s work consists of reporting on the pollution done by DowDuPont Inc. and Exxon Mobil Corp., and her ongoing series on the dangers of Teflon, a nonstick coating used for cookware, was highlighted. Lerner said that while the Environmental Protection Agency under former President Barack Obama’s administration was slow, the EPA under President Donald Trump is working against any efforts to regulate environmental pollution. She gave the example of the deregulation of the pesticide perfluorooctanoic acid.

“I will be the first to tell you that the EPA did a terrible job when it came to chemicals,” Lerner said. “DuPont ran circles around them in the regulatory world. Despite all the science that the EPA had done, all the administrative work that had taken years, the Trump Pruitt EPA reversed course and they allowed this pesticide to remain on the market. There were no new studies to justify this. They just flipped.”

Todd Miller received his award for his recently published book, “Storming the Wall: Climate Change, Migration and Homeland Security,” about climate refugees attempting to cross the border between the U.S. and Mexico. Miller interviewed many of those trying to cross the border and recounted the tale of one woman crossing through the Arizona desert.

“She was in a group of around 15 people, and after the seventh day, they arrived to a road, and at that road, just about everyone wanted to turn themselves in,” Miller said. “She described a scenario — it cut so vividly in my mind — of peoples’ noses spontaneously exploding with blood. And then she said she convulsed four times and passed out.”

Lee Fang received his award for the over 100 investigative pieces he did for The Intercept on the influence of money in politics both before and during the Trump era. Fang said that Trump’s getting elected was not a surprising event but a culmination of what had been happening for the past eight years in Washington, D.C.

“Many saw the election of Donald Trump as an outlier, but indeed he was a culmination of a steady march by the powerful, the billionaires and the right-wing interest groups, who took the election in 2008 as a rallying call to invest tens of billions of dollars into a new political machine designed to manipulate public opinion and dominate the election process,” Fang said.

Harriet Malinowitz, lecturer in the Department of Writing, said she has been going to the awards since she came to the college in 2014. She said she hopes the awards will provide more attention to independent news outlets.

Freshman Akshan Shah said he was inspired by what the award recipients did as journalists.

“I learned about this stuff in class, but hearing it from people who actually were on the ground and actually saw with their own eyes is so inspiring,” Shah said.