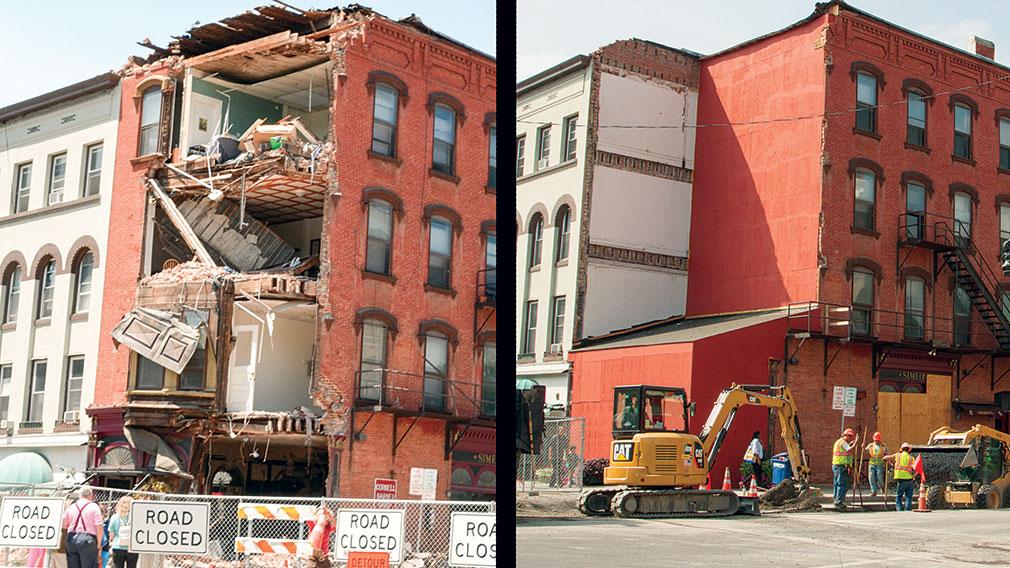 Max Gillilan, Corey Hess/The Ithacan
Passersby and construction workers assess the damage to the building that contained Simeon's bistro on June 20, the day a tractor-trailer carrying a load of cars crashed into it (left), and Aug. 27 (right).
By Sabrina Knight — Staff Writer
Published: August 27, 2014

The fate of Simeon’s bistro, following a tractor-trailer crash into the restaurant this summer, is yet to be determined as the investigation continues.

Rich Avery, co-owner of Simeon’s, said the restaurant plans to reopen in the same location but is still waiting for the building’s owners to figure out their plans to rebuild. Jerry Dietz, owner of CSP Management, the company that manages the building where Simeon’s is housed, said the company plans to restore the building from the crash exactly the way it was in addition to possibly renovating the Simeon’s facade.

Dietz said he hopes the reconstruction is completed by May 2015 but is unsure about the exact timeline of construction because the company is still waiting on insurance claims. No fundraisers have been planned for the reconstruction, but Dietz said there were a few fundraisers over the summer to benefit the employees and the family of Amanda Bush. The 27-year-old Simeon’s bartender from Lansing, New York was identified in a press release the same day as the incident as the one fatality in the crash.

In addition, the press release stated that five people were taken to the hospital for non-life-threatening injuries.

Jamie Williamson, public information officer for the Ithaca Police Department, said the IPD turned over parts of the overall investigation to the New York State Police.

Just after 4 p.m. on June 20, a tractor-trailer carrying a load of cars crashed into Simeon’s on The Commons while attempting to make a right-hand turn onto North Aurora Street. The vehicle was traveling down East State Street before it crashed into the corner of the building.

At a press conference held the same day as the incident, Williamson said there was one fatality, which was later identified in a press release as 27-year-old Amanda Bush, Simeon’s’ bartender from Lansing, New York. In addition, the press release stated that five people were taken to the hospital for non-life-threatening injuries.

The truck driver was taken into custody and was collaborating with the collision investigation, according to the press release. Williamson said there are no further updates about the truck driver that can be released while the investigation is still open.

“We’ve interviewed countless witnesses and gathered and analyzed virtually every piece of evidence that existed at the crime scene,” he said. “It’s been an exhaustive effort on our part as well as other agencies in the area that have assisted us.”

Mike Niechwiadowicz, director of code enforcement for the City of Ithaca, evaluated the damage from the crash and said the fact that the structure of the building was not reinforced with steel beams holding everything together helped the outcome of the collision.

“In a way, that ended up good because the truck just punched through the brick facade and made that portion of the building that was above where the truck went through collapse,” he said.

Storefronts on The Commons’ side of the crash are only supported by foundation, whereas the ones on Aurora Street are stronger because of their structural framing that runs parallel to the street, Niechwiadowicz said. The night of the incident, a private contractor took out the facade along Aurora so that the truck could be pulled out without endangering additional people.

After talking to an engineer, Niechwiadowicz said he deemed the building structurally sound and proceeded to secure and stabilize the area.

Construction on The Commons has not been affected by the incident, Niechwiadowicz said. During the hours when the area was fenced off the day of the incident, he said, construction workers moved down to a different part of The Commons to continue their work in lieu of restricted access to the Aurora side.

Ithaca College senior Charlotte Browning, who was at her home on Aurora Street during the incident, said she heard a crash nearby but thought the sound was from construction. When she stepped outside, she saw a cloud of smoke rising above The Commons and noticed that the building, containing Simeon’s and apartments above it, seemed slanted.

The entire building was forced to evacuate, Browning said, and later that evening, she noticed the entire block was barricaded and emergency vehicles still surrounded the scene.

Williamson said the IPD is expecting the NYSP’s reports within the next couple of weeks, but the department is not rushing the process.

This article has been revised to reflect the following correction: The article incorrectly referred to CSP Management as the owner of 224 E. State Street. The building is owned by Lang and Yong Shen from Shen Family Enterprises, LLC.