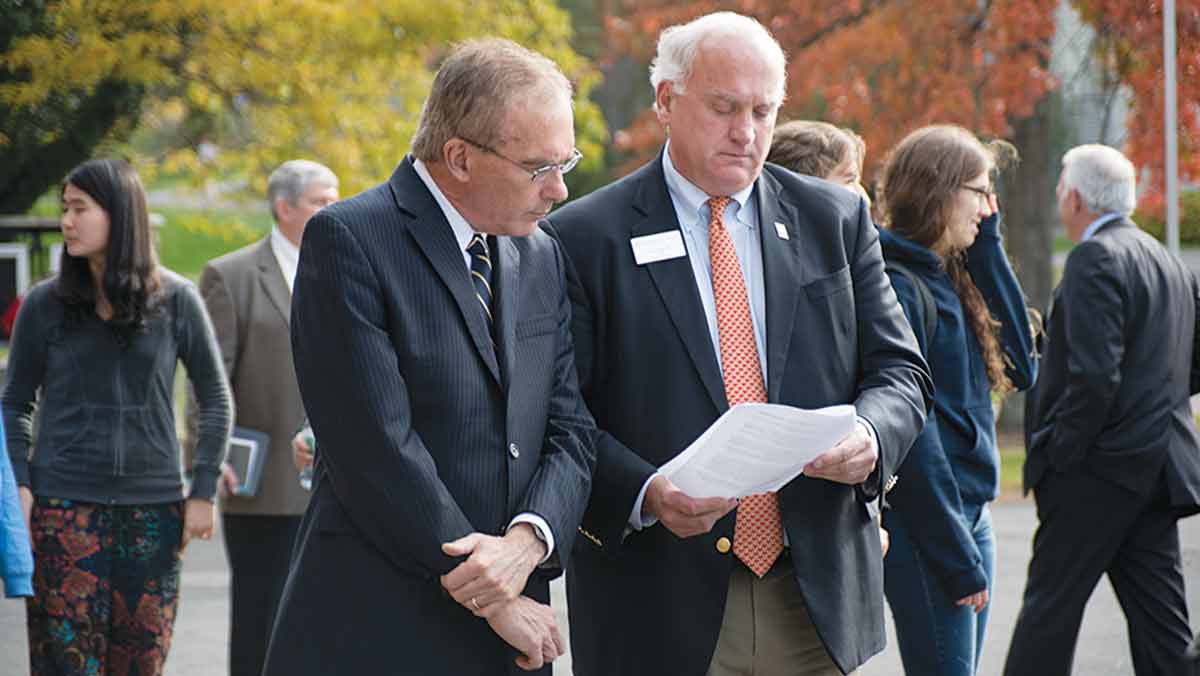 Amanda Den Hartog/The Ithacan
Ithaca College President Tom Rochon and Tom Grape, chair of the Board of Trustees, speak to each other at POC at IC's Oct. 21 protest. The college announced the members of the presidential search committee for the college’s ninth president March 10.
By Kyle Arnold, Sophia Tulp — Assistant News Editors
Published: March 10, 2016

The recommended student member of the committee is Michele Hau, a sophomore culture and communication major in the School of Humanities and Sciences.

The Student Government Association executive board was responsible for nominating three students to the board of trustees.

“Michele is an amazing student with a really great work ethic, and she is going to be able to challenge this group and to bring a really critical and important voice to the table,” SGA President senior Dominick Recckio said. “I look forward to her being a part of the committee.”

The recommended staff representative on the committee is Andrew Kosinuk, crime prevention and community events liaison in the Office of Public Safety and Emergency Management.

The Staff Council was able to nominate three members to the board, and Kosinuk was selected from those.

Peter Rothbart, chair of the Faculty Council, could not be immediately reached for comment.

“We had a number of really great applicants,” said Sean Reilley, chair of the Staff Council. “I trust Andrew will do an excellent job representing staff, and the committee as a whole will be successful.”

The three constituency trustees on the committee are Ciara Lucas, a junior journalism major in the Park School; Christy Agnese, school operations and external relations officer in the School of Music; and Kristin Muenzen ’00, alumni representative on the board of trustees. Agnese gained her seat on the board in May 2014. She will still be on the board as she serves on the search committee, as staff trustees retain their position for three years, unlike students, who serve for two years. Lucas has represented the student body on the board of trustees since May 2014. However, her term as the student trustee will expire before the search process begins. It is unclear when Muenzen began her term.

According to the presidential search process website, the committee is composed of representatives from the three constituencies at the college who are expected to have a “clear sense of and dedication to the college’s mission,” a commitment to shared governance and a “respect for the college’s history and a vision for its future.”

According to the website, the role of the committee is to evaluate the college presidential candidates presented by the executive search firm and deliver a list of qualified finalists to the board of trustees, which will ultimately select the next president.

According to OrgSync, the first meeting of the presidential search committee will take place in April or May, and there will be five to seven meetings overall, mostly in Fall 2016, at a yet-to-be–determined off-campus location. The college will pay for all travel arrangements and accommodations for the meetings.