Michael LaTour, professor of marketing and law at Ithaca College, died “peacefully at his home” Nov. 8, according to a Nov. 13 announcement by the college. 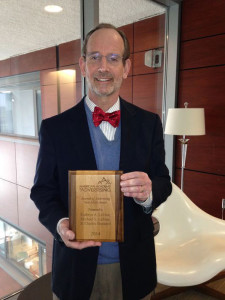 The specific cause of death is not known at this time. Dawn Kline, assistant dean in the School of Business, said LaTour was on leave for the fall semester.

According to the announcement, a memorial service for LaTour will be held at 10 a.m. Nov. 21 at Muller Chapel, with a reception to follow in Clark Lounge. Instead of flowers, community members are encouraged to contribute to the Michael LaTour Memorial Fund for Research Excellence, a fund established to recognize the research accomplishments of professors in the School of Business.

According to an Ithaca Journal article from April, the Journal of Advertising awarded a study co-authored by LaTour as its 2014 Article of the Year. The study, titled “Fuzzy Trace Theory and ‘Smart’ False Memories: Implications for Advertising,” showed that some false memories are created by overthinking, rather than lack of information processing.