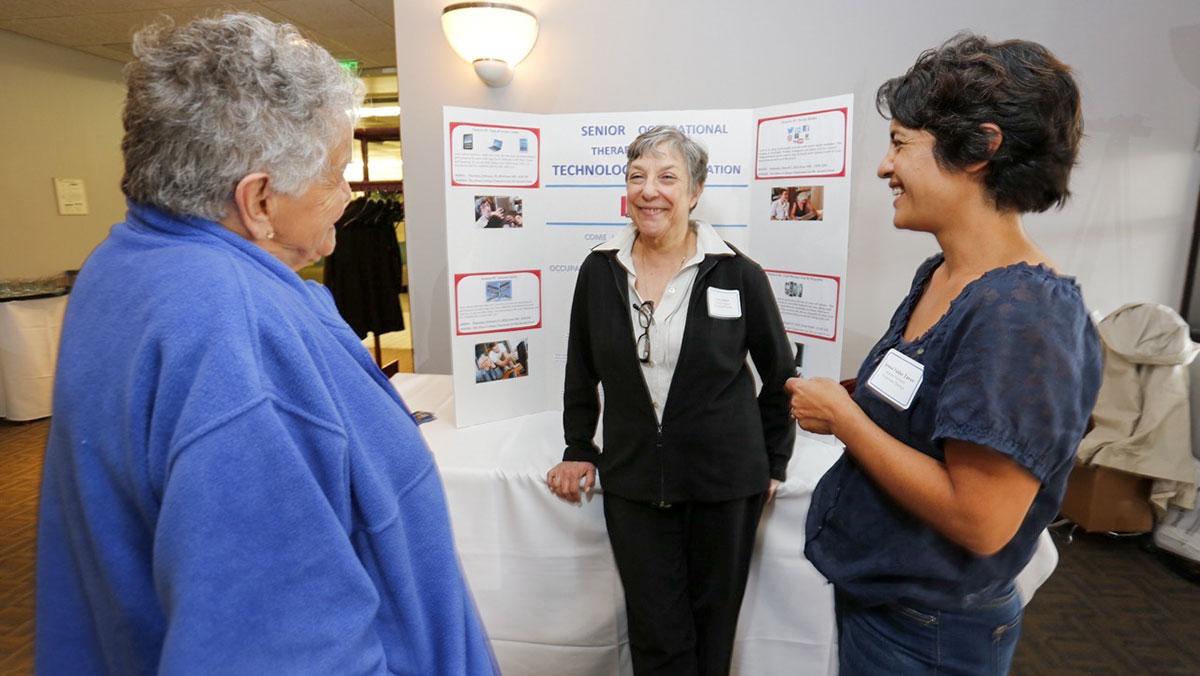 Society is made up of multiple layers of ages and demographics, and communities such as Ithaca are striving more and more to bridge the generational gap. One program that helps to connect Ithaca College students and members of older generations is the college’s partnership with Longview, a nearby assisted-living facility. On Oct. 29, the partnership celebrated its 15-year anniversary.

Ithacare, the organization in charge of running Longview, was created in 1974 when one of the college’s dormitories was converted into an adult-care facility. In 1989, the Ithacare board of directors decided to build Longview as a joint facility, and since 1999, students of the college and residents of Longview have had the ability to participate in extensive intergenerational programming.

Rhoda Meador, director of the college’s Gerontology Institute, works hand-in-hand with directors at Longview to make the partnership possible. She said she believes the goal of the relationship is more than to simply provide a setting for interaction.

“The IC-Longview partnership has several important goals: to create a shared environment that enriches the college’s curriculum, to facilitate personal and professional growth, to promote volunteerism and to enhance the quality of life of the Longview and Ithaca College communities,” Meador said.

Meador said faculty at the college decide on where interaction with Longview best intersects with their respective curricula. She said intergenerational classes and experiential learning are vital in professionally and personally shaping students, and that participation has grown in recent years.

“Currently, an average of 300 students and 25 faculty members participate in Longview-related activities each semester,” Meador said.

Senior Abbey Foxen is currently pursuing a minor in aging studies. She has been actively involved in Longview programs since her sophomore year at the college and said she is hoping to follow a career in speech pathology.

“I worked in the center for life skills for stroke-victim rehab as part of a class’ experiential learning program,” Foxen said. “I’ve worked one-on-one with residents, been a part of small-group activities and even attended classes alongside Longview residents.”

Longview also provides an opportunity for personal growth in both students and Longview residents, Meador added.

“There’s so much to be learned from each other. Growing up in different times, storytelling between generations can provide so much wisdom and so many life lessons,” she said. “We’re creating more of a family community through Longview.”

Bob and Alice McCune have been residents at Longview since March. They have been actively involved in intergenerational activities such as Be Sharp Stay Sharp, a cognitive exercise program that allows students and residents to connect over puzzles and games.

“I’m blessed to still get around, still see the world and do the things I’ve always enjoyed,” Alice said. “We’re taking independent courses at Longview and at the college, and we’re always making new friends.”

Bob, 85, said he is actively involved with programs offered by the college’s Gerontology Institute and is currently auditing a course in bioethics.

Christine Pogorzala, assistant professor of gerontology and the Longview coordinator at the college, was involved in the initial planning of the partnership programs. She currently teaches Introduction to Aging Studies, which five residents are auditing, at a Longview classroom dedicated to college use.

Pogorzala said the partnership is important because it equips students to succeed both in and beyond the classroom.

“Look at the demographics,” Pogorzala said. “There’s always something for people to learn, regardless of occupation. You will always have to work with people who are older or younger than you, and learning how to do that is the partnership’s goal.”

Meador said the Longview partnership is widely acclaimed as a model for intergenerational college programming, citing several articles that have been published in regional and national publications such as AARP The Magazine.

“Longview gives a bigger perspective on life,” she said. “It broadens the world of students and residents by taking them out of the day-to-day interaction with peers.”

Meador said she is very excited as she looks at the partnership’s successful 15-year history as well as its promising future.