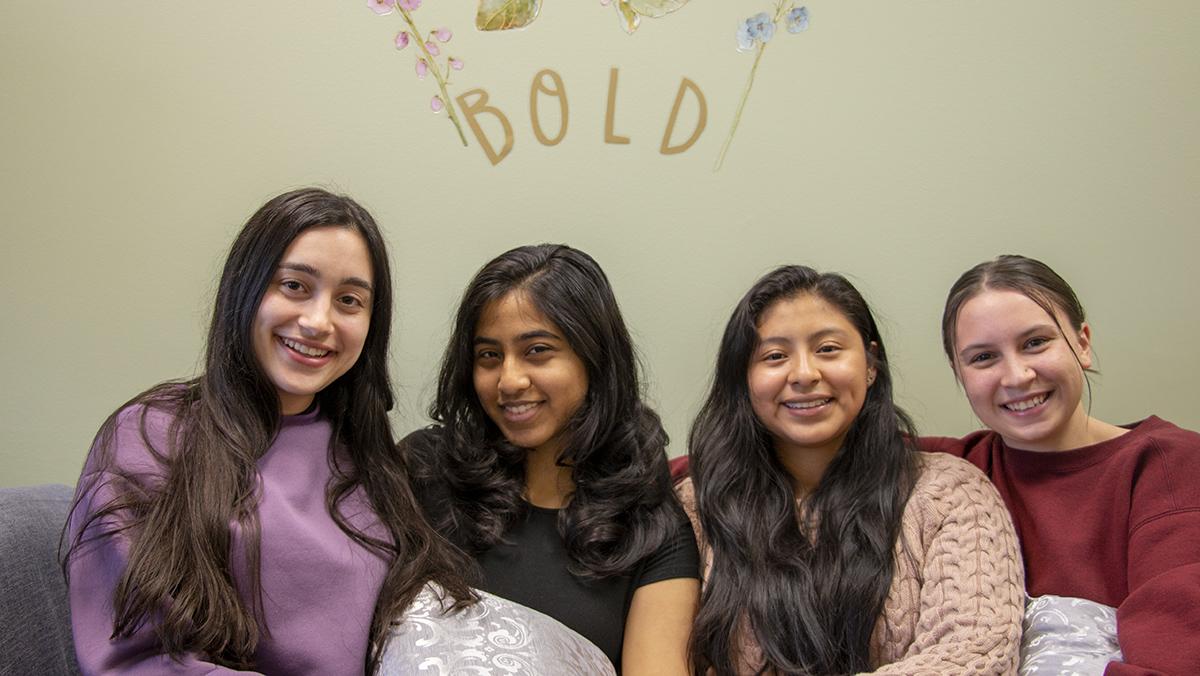 The Ithaca College chapter of the BOLD Women’s Leadership Network received a $2 million grant from the Helen Gurley Brown Foundation, which will help fund the program through the next two cohorts.

The Helen Gurley Brown Foundation funded BOLD in 2020 with a $1.2 million grant, which was the last time BOLD received a grant. The college’s former president, Shirley M. Collado, created the BOLD program when she worked at Rutgers University–Newark, and she brought it to Ithaca College in 2017. Since then, BOLD has helped empower approximately 50 women from a multitude of backgrounds through community engagement and financial support.

The grant will support the scholars directly through financial support in the form of scholarships and programming that align with the BOLD program goals. The college’s chapter of BOLD is a part of a larger network of colleges and universities involved with BOLD, which helps to provide the scholars with a deep network of scholars to connect with.

Junior Amulya Ravitej Bachala is a part of BOLD’s fifth cohort of scholars. She said the biggest reason she wanted to get involved with BOLD was to learn from the other women that she would be working alongside for her final two years at the college.

“I think it’s really great that we received this grant because now there won’t be this constant impediment of ‘Will we be able to fund all of this?’” Ravitej Bachala said. “All of the things we do are so important and I think to not have the constant question of finances will make a big difference.”

The BOLD program accepts between seven and 10 students. Each scholar also receives a two-year scholarship of up to $27,500 per year beginning their junior year. Since the program focuses on helping to empower young women who have been significantly underrepresented in higher education, the financial support is crucial for most scholars.

The scholarship aspect of the program is need-based, which means scholars may not be eligible for the full amount of $27,500. The average amount awarded to a student for one year is $19,000 according to Rosanna Ferro, vice president for student affairs and campus life. Ferro is the administrative lead for the BOLD program at the college.

“Receiving this grant is significant because it has allowed for us to continue supporting the growth and development of the program,” Ferro said via email. “We are able to fund a new cohort of scholars through their last two years at Ithaca and also provide some opportunities for those that may choose to pursue certain post-graduate plans.”

Senior Khangelani Mhlanga said if it were not for the BOLD scholarship, she probably would not have been able to complete undergraduate school. Mhlanga is an international student and is unable to take out federal loans for her education but was able to work full-time off campus and also work as a resident assistant to help cover the initial cost of tuition expenses.

“Even now, I still have to work as hard as I did before, but I don’t have to worry about the thousands of dollars that were hanging over my head, and so the scholarship definitely meant a whole deal because it meant I could stay at IC,” Mhlanga said.

Mhlanga emphasized the importance of the professional and personal development that BOLD offers. She also said with BOLD, students are able to reach their full potential without having to worry about the financial burden that comes along with missing work for professional conferences or school organizations that students want to be a part of.

Along with committing to admitting up to 10 students each cohort into the next two cohorts, the grant will ensure continuation of the transformation project, which is unique to the college’s BOLD chapter. Scholars work together on implementing a project in their community for the entirety of their senior year. In the past, these projects have consisted of topics like mental health awareness for people of color, high school mentorship and women’s empowerment. During the summer before the scholar’s senior year, they present their ideas for their projects and apply for funding.

“We send the proposal to the foundation, which is where we get the money from to fund the actual project, and then if they approve it, we get to go ahead and implement that all through our senior year,” Ravitej Bachala said.

BOLD also offers the chance for graduating scholars to apply for a Helen Gurley Brown BOLD Fellowship, which offers up to $40,000 of funding per scholar for employment at a non-profit organization that embodies the values of the BOLD vision.

Kelly Madden ’20 was a part of BOLD’s second cohort at the college. After graduating in 2020, she completed her BOLD fellowship at Active Minds, a non-profit for mental health awareness and advocacy for young adults in Washington, D.C.

“After completing my fellowship, I was offered a program management position and was accepted into graduate school,” Madden said via email. “Without the faculty mentorship, networking opportunities to develop leadership skills, support of my fellow cohort members, and program lead, I’m not sure if I would be in this field today.”

Along with approximately 12 other BOLD alumni, Madden is assisting with leading the BOLD program while the current program director, Samantha Elebiary, is on leave. Madden is helping to support the fifth cohort for the rest of the semester, along with Julissa Ramirez-Cruz ’19.

“I can safely say that we alumni are thrilled to hear that funding has been renewed for this program at Ithaca College,” Madden said. “BOLD has created many opportunities for students to connect and coalesce around community service work.”

Mhlanga said she is very much interested in being able to still be involved with BOLD after graduation in some capacity, whether that be mentoring students or coming back and participating in workshops with current BOLD scholars.

“I think it’s amazing that BOLD will be able to continue to support more students [financially] while also being able to connect them to a lot of other amazing women and professionals out in the world,” Mhlanga said.