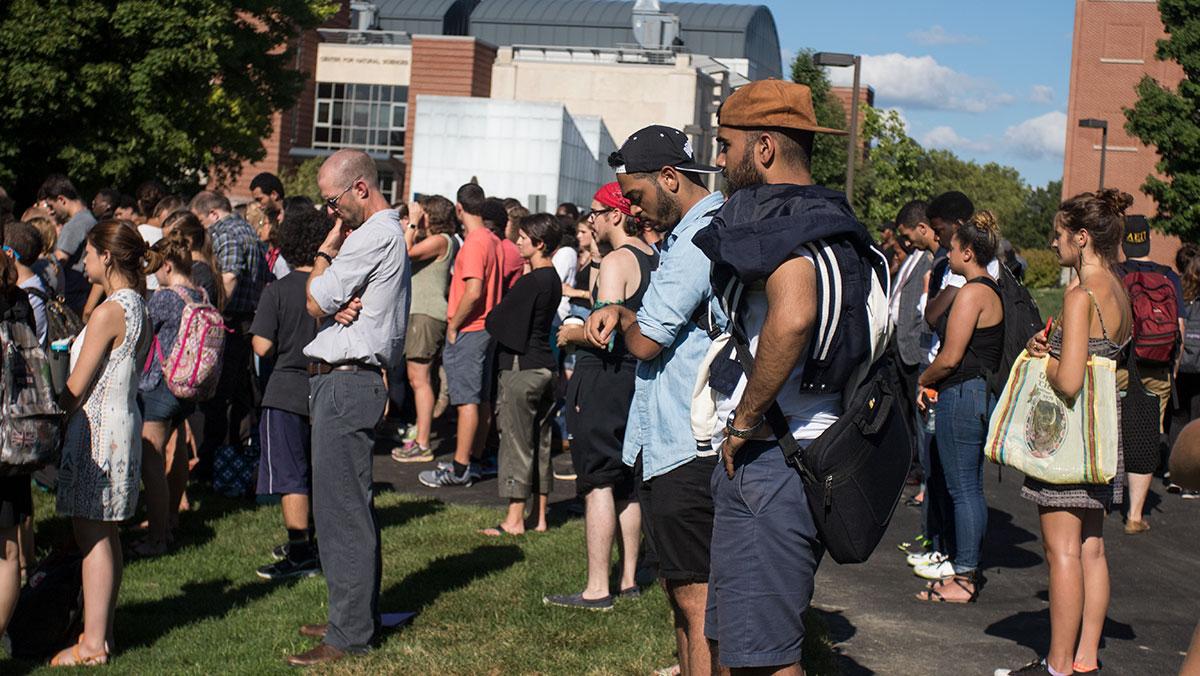 Silence. Sniffing. Stifled cries. Lips pressed, heads shaking. And more silence, as more than 200 students and community members crowded inside and out of Muller Chapel for the community gathering for Anthony Nazaire.

At 4 p.m. Aug. 29, the sun shone almost directly over the pond and into the chapel, illuminating the stained glass and framing those who took to the lectern to speak about the Ithaca College sophomore.

Nazaire died after being stabbed on Cornell University’s campus the early morning of Aug. 28, Jamie Williamson, public information officer at the Ithaca Police Department, said. A large fight broke out as an event at Willard Straight Hall dispersed close to 2 a.m., and Nazaire and another Ithaca College student, whose name has not yet been released, were stabbed Williamson said. The other student has been released from the hospital.

As students, faculty and staff joined friends of Nazaire’s to mourn the community’s loss, sophomore Juliana Child opened the vigil in song. Her voice projected through speakers set up outside Muller Chapel for the hundreds unable to sit inside. Father Carsten Martensen, who organized the community gathering, greeted the crowd with scripture and a deference to Nazaire’s presence in the community.

“I thank God that this young man has been in our midst, has made a difference,” he said. “I pray we can all learn and grow from his life, his love, his friends.”

He introduced Sean Eversley Bradwell, director of programs and outreach, who encouraged community members to focus their energy on supporting one another.

“Let’s put our arms around one another and commit to doing something positive,” Bradwell said.

Sean Reid, who was named dean of the School of Business last year, spoke at length about the goals and drive Nazaire had. He wanted to get his MBA, become an entrepreneur, consider law school. He would not settle for anything less than excellence, Reid said.

“Everyone in this room has a different definition of what success was, but Anthony had a plan,” Reid said. “Everything he did, he did full-tilt.”

This common thread — Nazaire’s work ethic, compassion and, markedly, his smile — emerged throughout the testimonies community members gave, one at a time, for more than an hour. Students from Nazaire’s high school; members of Brothers4Brothers, the organization of which he was a part; and friends from the college spoke of their memories with Nazaire, their last conversations with him and their favorite aspects of his personality.

One of the final tributes came from President Tom Rochon, who recalled vivid details when Nazaire’s family and friends helped move boxes out of his Circles apartment Aug. 28, the afternoon of his death. His description elicited tears from crowd members, and he urged them to lean on one another.

“We will find ways to take care of each other,” Rochon said. “Please work with me on this. Let me work with you on this. It will be a better community for all of us, and we will do it for Anthony.”

“Anthony was a loving, caring, helpful, devoted, hardworking young man who was working on achieving his bachelors in business,” Kiara wrote. “Anthony was loved by many family members, friends,teachers, colleagues, and co workers. … Any donation we receive would mean the world to us as this tragedy was so unexpected. We never expected to be burying Anthony but to actually be waiting to attend his graduation. We would gladly appreciate it and please keep us in prayers in this time of heartache.”

Nazaire was a business administration major from Brooklyn, New York, where he graduated from Brooklyn Theatre Arts High School. He was also an executive board member of the organization Brothers4Brothers, a club at the college for men of color to meet and discuss political, social, communal and academic concerns that affect them.

The stabbing occurred at the intersection of College Avenue and Campus Road after an Omega Psi Phi event at Willard Straight Hall dispersed. Williamson said the IPD is currently reviewing cellphone videos of the incident; however, no suspects have been named at this time.

Around 1:57 a.m., officers from the Ithaca Police Department and the Cornell University Police Department responded to “a large fight,” the IPD said. After medical aid was provided by first responders at the scene, Nazaire was transported to Cayuga Medical Center and was later pronounced dead. The other victim was flown by helicopter to Upstate Medical Center for treatment and was later released.

The Ithaca Police Department is working with other local law enforcement agencies in the homicide investigation and is in the process of completing witness interviews, according to the release.

David Maley, senior associate director of media and community relations at the college, said the college has reached out to “those that we believe might be most immediately affected by this on campus,” offering them support.

The Ithaca Police Department is investigating a stabbing that occurred at 12:46 a.m. Aug. 31 on the 300 block of Hillview Place