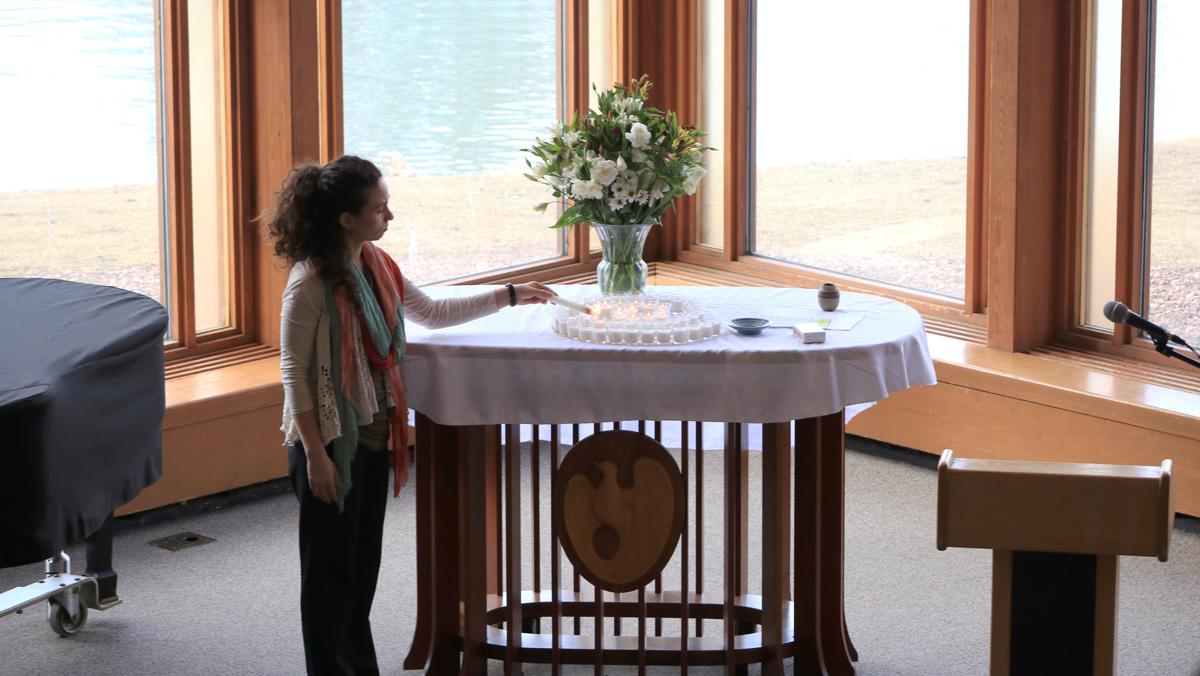 Cody Taylor/The Ithacan
Lauren Goldberg, executive director of Hillel at the college, lights a candle in honor of the victims of the New Zealand shooting at a gathering March 19 hosted by the Muller Chapel.
By Cody Taylor — Staff Writer
Published: March 20, 2019

The Office of Religious and Spiritual Life hosted a gathering of solidarity March 19 in Muller Chapel in response to the mass shooting that took place in New Zealand. Seventy people in the Ithaca College community attended to show their respect for the lives that were lost.

The shooting, which occurred March 15, was the worst mass murder in New Zealand’s history. The shooter attacked two mosques located in the city of Christchurch, New Zealand. The shooting left 49 people dead and 40 others injured, according to The New York Times. The shooter allegedly committed this mass shooting as a supporter of the white supremacist movement.

The reception was approximately an hour long and consisted of four different speakers. It began with an Islamic prayer shared by attendees and continued with some opening statements from Hierald Osorto, director of religious and spiritual life, and a moment of silence. The next speaker to address the community was President Shirley M. Collado. Collado said that the shooting left her frustrated and in disbelief but that this gathering showed her that the community can come together in hard times like these.

“It is disheartening and overwhelming that we are having this gathering and that we are, within this year, talking about another tragedy that is based on hateful violent acts,” Collado said. “I am very inspired by the fact that several members of our community devoted time to being here and reflecting on these individuals that lived a distance from us and that we wanted to take time to learn about who they were and resist any temptation to be numb.”

Following the guest speakers, people in attendance took turns honoring the victims of the hate crime by reading off their names and a small description of who they were. While the names were being read off, 50 candles were lit in commemoration of the lives that were lost.

Freshman Siddique Ahmed is Muslim and said that gatherings like the one held in Muller Chapel help show that the community members care for one another and that the gathering also helped strengthen bonds throughout the college campus.

“This is very important for us as Muslims around the world,” Ahmed said. “We are always being told that we are terrorists. With all of these things going on — there is a lot of hate — and, so, when bad events happen and people come together in Ithaca and around the world, it really reaffirms that no matter what happens there is people that support you and that love you.”

Sophomore Orian Fitlovich attended the event and said she felt the gathering was important because it allowed the community to connect and strengthen during hard times. She said she believes community members need to support each other and come together as a whole, especially after the Muslim community supported the Jewish community last semester after the Pittsburgh synagogue shooting.

“I thought it was important for us to show our respect and solidarity — to know that if something happens that IC comes together to support each other,” Fitlovich said.

Samantha Bobbe, BOLD program director in the Office of the President, said that she feels nothing can change what has happened to the innocent victims but that Muller Chapel and the gathering offered a needed space for the community to grieve.

“I think it is very important to have time to feel after things like this happen in our world and recognize that there are people around the community that can share in that space with them and to be there for them,” she said. “There are not enough words to make what happened OK, but to have that space and that solidarity for people on campus is very important.”

At the end of the gathering, Katherine Mulligan, associate professor in the Department of Theatre Arts, led the group through an activity where attendees joined hands and one by one took turns letting each other know that they are not alone.