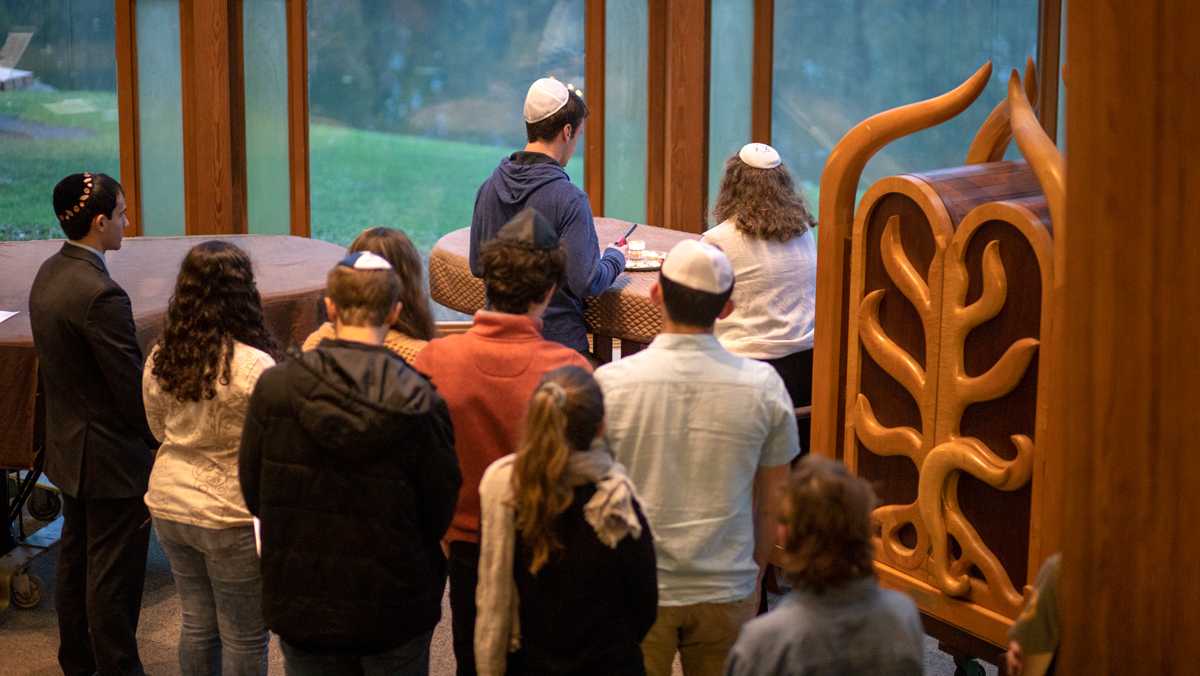 Sam Fuller/The Ithacan
Members of the Ithaca College and local community attended a vigil in Muller Chapel Oct. 28 held to honor the victims and survivors of the shooting at the Tree of Life Synagogue in Pittsburgh Oct. 27. Eleven members of the Jewish community were murdered at the scene.
By Alexis Manore — Staff Writer
Published: October 30, 2018

Muffled sobs could be heard outside Muller Chapel where approximately 40 Ithaca College and local community members gathered as Hillel at Ithaca College led the group in song at a vigil  Oct. 28.

The vigil was held in honor of the victims and survivors of a shooting that occurred in a Pittsburgh synagogue — the Tree of Life Synagogue — early in the morning Oct. 27. This was the deadliest anti-Semitic attack in United States history, killing 11 members of the Pittsburgh Jewish community. The shooter, Robert Bowers, was armed with three Glock handguns and an AR-15 semiautomatic rifle.

Bowers has a history of posting anti-Semitic remarks on the internet. According to The Washington Post, after he was captured, Bowers told SWAT officers, “They’re committing genocide to my people … I just want to kill Jews.”

Hillel sang hymns, read from Psalms, gave speeches and lit 11 Yahrzeit candles to honor the victims and survivors of the shooting.

Lyons said she is deeply saddened by the attack and condemned the anti-Semitic views of the suspect.

“Our hearts break for the senseless murder of our fellow Jews and all victims of vicious hate crimes,” Lyons said. “We condemn the dangerous rhetoric that permits such senseless violence, and we stand with the Tree of Life congregation and its community during this terrible time.”

Lyons said the Jewish community is not the only community that has come under attack and that many other groups have also been victims of acts of violence in the United States for many years.

“As our Torah teaches us, we are responsible for one another and commanded to honor the image of God in one another,” she said. “Our sense of justice compels us to address the core issues that are facing not just the Jewish people, but all people in our country and in our civil society. This time the Jewish community was targeted in what may be the worst anti-Semitic attack in American history; other times it has been African Americans or Sikhs or Muslims, or members of the LGBTQ community or too many others.”

Lyons said now is an especially important time to reach out to those who have different views.

“As a nation committed to the freedom of rights of all, we must commit to reach out not only to those who are like us, but especially, as our sacred Torah has taught us, to those with whom we disagree,” Lyons said.

Reid said he believes this will not be the last time there will be an anti-Semitic attack in the United States.

“The congregants who were murdered while singing these songs enter into a long line of Jews who died sanctifying God’s name,” Reid said. “This was not the first time Jews have been murdered while praying at a synagogue, and with sadness, I don’t think this will be the last time.”

Goldberg said the vigil was held to mourn over those lost and to gather together in the wake of tragedy.

“Tonight we gather in mourning, in outrage, in community, as Jews and allies, and hold each other in this moment,” Goldberg said. “We’re here because our hearts are broken, and our hearts break with those who grieve their loved ones, who were killed in prayer, and were injured in the line of duty. We gather here in honor of those individuals whose Shabbat prayers for peace were shattered by senseless violence. May the memories of all of those lost be a blessing.”

Goldberg said the Jewish community at the college needs to work together to eliminate the hate speech that is prevalent in society.

“Together, we will draw on the strength of our tradition, of each other and our Ithaca College community,” she said. “We will draw strength from these cornerstones so that we can eradicate the hateful rhetoric which has become so pervasive today.”