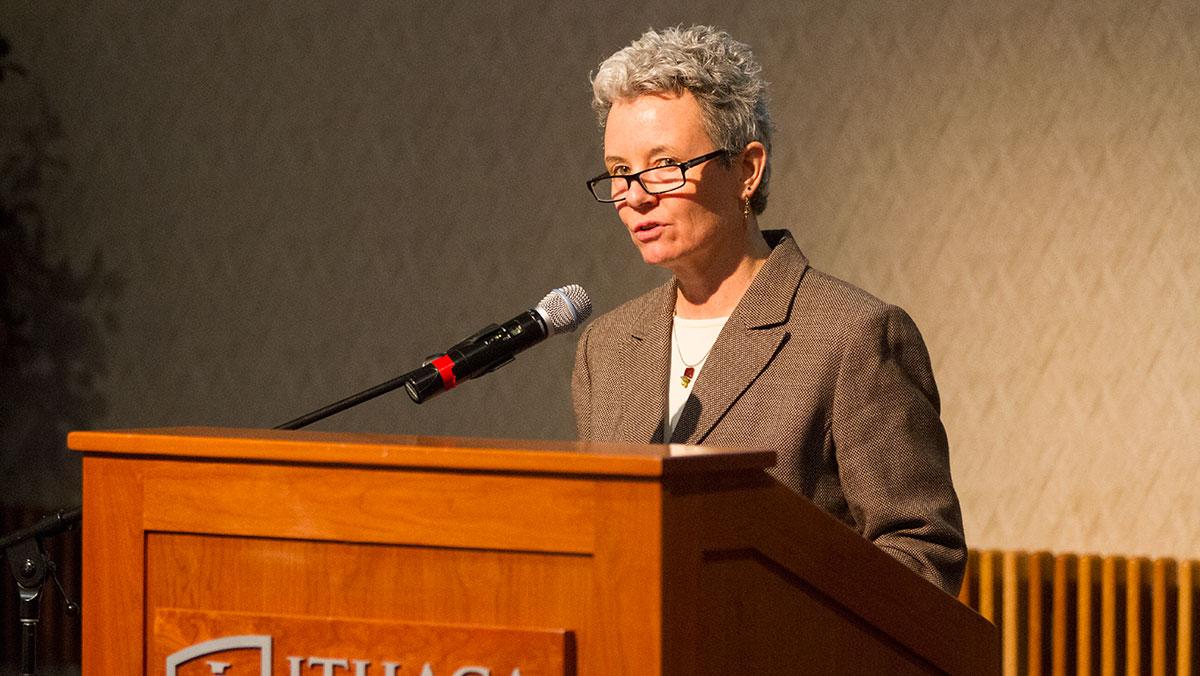 Jillian Flint/The Ithacan
Leslie Lewis, dean of the School of Humanities and Sciences and third provost candidate, addresses the community in an open session on Dec. 9 in Emerson Suites.
By Evan Popp — Staff Writer
Published: December 9, 2014

The Ithaca College community met with another of the finalists for the permanent position of provost and vice president for educational affairs on Dec. 9, but unlike the previous two candidates, Leslie Lewis, dean of the School of Humanities and Sciences at the college, was a familiar face.

Lewis is the only in-house candidate of the four identified by the college to replace Marisa Kelly, former provost and vice president for educational affairs, who left the college on May 31. Lewis met with members of the campus community throughout the day, including at an open meeting in Emerson Suites where she presented her vision for the college if she were to be the next provost.

In her presentation, Lewis emphasized the importance of holistic learning, which she defined as exploring and thinking about all parts of students’ educational experience.

“Holistic means that the whole defines its parts just as much as the parts define the whole,” Lewis said.

Lewis said one of the key elements of a holistic learning experience at the college is for all students to feel involved in the campus community. She also said students need to be learning both inside and outside the classroom.

A college with a holistic learning approach is one that values and is able to collaborate effectively with the various academic disciplines confined within it, Lewis said. She praised the college for being what she called student-centered, and for incorporating some of the aspects of holistic learning, but she also said what holistic learning does not entail.

Lewis said one of the essential aspects of the job facing the college’s next provost is facilitating conversation and collaboration between different communities on campus.

“I do think that there is a way that we continue to struggle because we are just big enough that it’s hard for us to work in tandem with one another,” Lewis said.

She said solutions to the communications issue between different aspects of the college could be attained through examination of the basic principles of the college’s educational philosophy, which she said will allow the right conversations between the right people to take place. She said it will also aid with the integration of academic and student affairs, a large portion of the incoming provost’s job description.

Lewis said she doesn’t have a list of things that need to happen for academic and student affairs to be successfully integrated. However, she said whatever the specific implementation of the combination of the two areas is, there will need to be effective communication.

“What I would say is that a lot of conversation needs to occur in order for us as a group to understand the best places for educational affairs, for academic affairs and student affairs to come together,” Lewis said.

As the only provost finalist currently working at the college, Lewis said her experience at the college would serve as both an advantage and disadvantage if she were the next provost.

Lewis said she would be careful to not assume she understood different aspects of campus from her role as H&S dean if she were working with them as provost. However, she said having worked on campus might make the job’s learning curve easier.

“I do think that knowing people is an important component of the early stages of being on a job,” Lewis said. “And the fact that I know people and they know me helps facilitate getting some of the work done.”