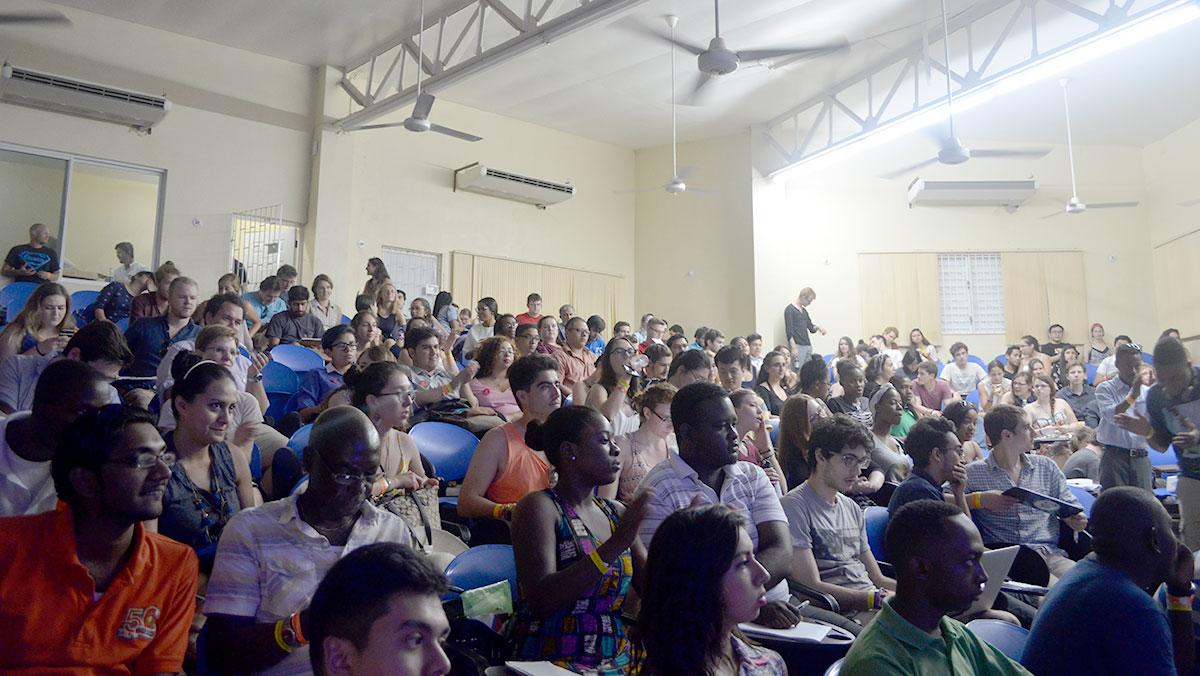 Members of the Ithaca College speech and debate team were able to travel to Montego Bay, Jamaica. Members of the over 70 international teams sit in the auditorium to watch other groups spar in a Worlds Style Debate.
By Addie Dlott — Contributing Writer
Published: April 3, 2016

Members of the Ithaca College speech and debate team were able to travel to Montego Bay, Jamaica, to participate in the Pan American Universities Debating Championship to compete in a Worlds Style Debate.

Juniors Zachary Lisien, Timothy Conners and James Dellasala attended the tournament, which took place March 24–28 and pitted them against over 70 international teams. At this tournament, Conners and Dellasala participated as debaters, and Lisien was sent as a judge.

The team placed 68 of 74. However, for speaker points — a ranking of how effectively and eloquently the debater presents arguments to a judge —  Conners and Dellasala received 119 out of 148, Lisien said.

“Even though they didn’t place overall well, they did better in speaker points than in placement,” Lisien said. “It was fun. We learned a lot. The weather was nice, and the drinks were cold and refreshing.”

Conners said the tournaments are about the experience and networking.

“It’s such a great learning experience,” Conners said. “Not only to network with other teams from all over the country, but also, you just learn so much. You hear these top–level debaters. They don’t just send anyone to Jamaica.”

This is the second year the team has participated in the Pan American Universities Debating Championship, which is a debate championship for teams at universities in North and South America and the Caribbean regions. Senior Sean Themea, president of the speech and debate team, found the tournament last year when it was held at the University of Miami.

In a Worlds Style Debate, students cannot prepare for their debates, as the topic is given 15 minutes before the debate begins. In that time, the team must plan its argument before it speaks.

The tournament features speech and debate in both English and Spanish, and countries including Argentina, Bermuda, Canada, Chile, Mexico, Peru, Venezuela and the United States participate.

Scott Thomson, director of forensics and assistant professor of communication studies, has been coaching the college’s team for 15 years and is proud of the team’s accomplishments for the 2015–16 school year. Forensics is the study of formal debate and argumentation.

Thomson said the team had a good year. In October, the team traveled to Suffolk University in Boston and placed well in the competition. The team won first place in the debating event of the Suffolk Fall Classic Speech and Debate Tournament, and at the end of the competition, the top three spots were held by the college’s team.

Themea said he was proud of the team’s accomplishments in Jamaica.

Thomson said the trip was made possible by the funding from the communications studies department and the Student Government Association. The team will attend this tournament annually if it can get the funds, Themea said.

The team has traveled all over the country and world to participate in tournaments throughout the school year. It attends about 12 tournaments per year, Thomson said. The team has between 15 and 20 members this semester and attends two to three tournaments per month. Weekly practices take place at 7 p.m. Wednesday nights in Job 161.

This article has been updated to correct a misspelling of Sean Themea’s last name.