Ithaca College faculty are paid less than at other institutions 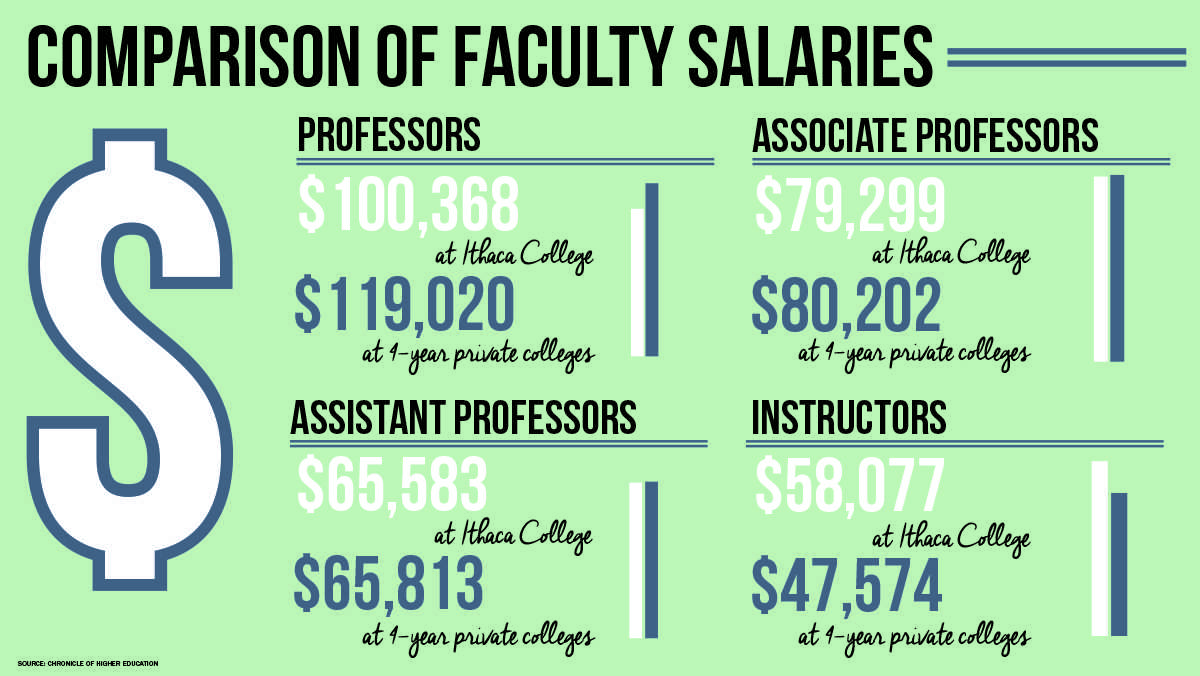 Design by Ali Teadore
Professors at Ithaca College are paid less than their counterparts at similar four-year private colleges in New York state, according to data from The Chronicle of Higher Education.
By Madeline Lester — Staff Writer
Published: April 28, 2016

Professors at Ithaca College are paid less than their counterparts at similar four-year private colleges in New York state, according to data from The Chronicle of Higher Education. Despite this data, some faculty and administrators believe it is not fair to compare these other institutions in New York state to the college.

“Unranked” faculty members, non-tenure track faculty on an average contract of nine to 12 months, made $42,093 last year, while those at similar institutions made $59,998.

Thomas Pfaff, a professor in the Department of Mathematics and director of the honors program, also said the comparison between colleges could be difficult due to the difference in standards of living in specific areas.

“Inherently, salary comparisons are very complicated things,” Pfaff said. “It’s easy to just look at the straight–up numbers, but there’s cost of living, quality of life, and there’s a number of decisions in general that faculty take into consideration.”

Benjamin Rifkin, provost and vice president for educational affairs, mirrored these thoughts about the difference in cost of living. He said some schools similar to the college are situated in urban areas like New York City, which affects the pay rate.

Rifkin also attributed differences to the college not having certain higher-paying fields, such as engineering or nursing. He said if these fields were present at the college, it would pull the average pay up. He also said the difference in how long professors have been at the institution as well as how many professors there are, create outliers in the equation used to find these results.

On the other hand, Pfaff said he does hear complaints from colleagues about pay raises.

“The one thing I tend to hear among faculty is that raises tend to be really, really small each year,” he said.

Peter Rothbart, professor of music theory, history and composition and chair of Faculty Council, said he recognizes the importance of faculty pay and its direct impact on quality of education. He said if a college offers slightly below–median salaries, the institution will not attract or keep the top talent.

“We’ve certainly seen a loss of a lot of faculty who have gone to higher paying institutions,” Rothbart said. “Unfortunately, we are still a tuition-driven college, and we have to get out of the loop.”

Rachel Kaufman, a lecturer and member of the bargaining committee for the college’s part-time faculty union, said she and other lecturers face hardship at the college due to their undercompensation.

“Overall, if you work as a part-time faculty member at Ithaca College, you are not able to make a living wage,” Kaufman said. “A growing number of part-time professors are living in poverty, and the college’s over-reliance on adjunct faculty laborers to teach their classes adds to this trend.”

Ultimately, Rifkin said the college tries to find a middle ground between the cost of attendance and faculty salaries.

“Everyone would like to be paid more,” Rifkin said. “We have to find the perfect balance between what it costs to attend Ithaca College and what we have to pay faculty to retain them.”