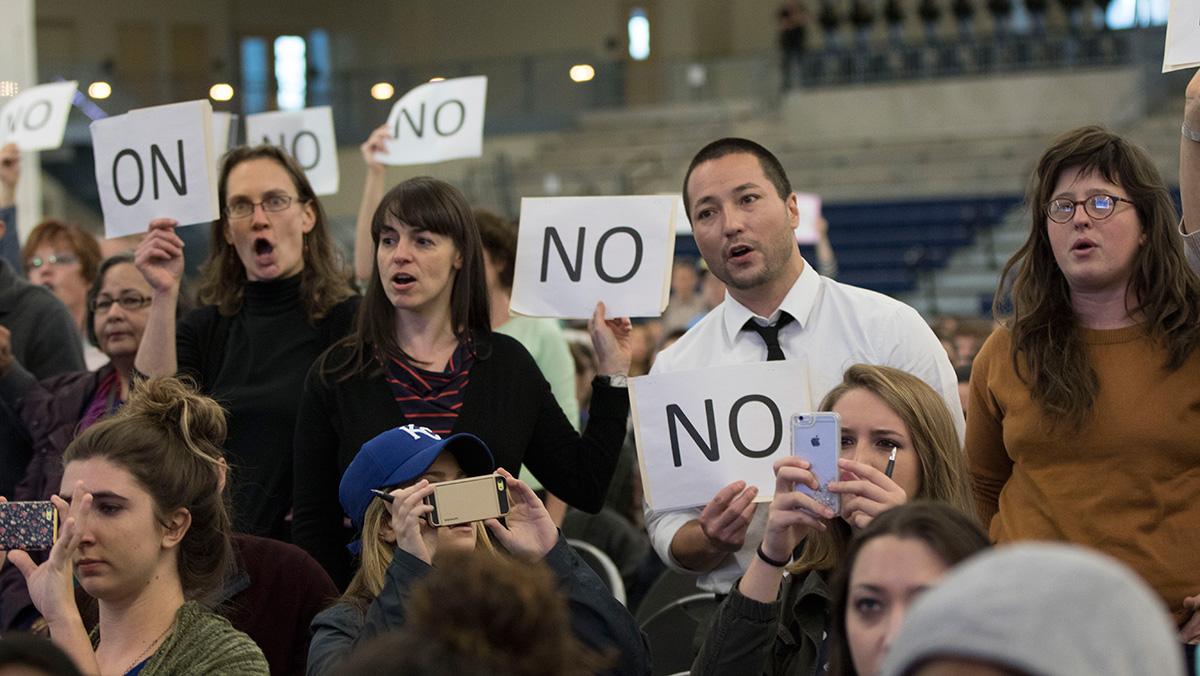 Yana Mazurkevich/The Ithacan
Members of the Ithaca College faculty chant "Tom Rochon, no confidence" along with students who took stage at the “Addressing Community Action on Racism and Cultural Bias” event in the A&E Center Oct. 27.
By Aidan Quigley — News Editor
Published: October 28, 2015

Members of the Ithaca College faculty are discussing holding a vote of no confidence in President Tom Rochon.

Faculty members are expressing concerns about the Blue Sky Reimagining Kick-Off event, the racial climate on campus and several other aspects of Rochon’s leadership.

The Student Government Association passed a bill establishing a vote of no confidence Oct. 26. That vote followed multiple protests about the racial climate on campus.

A vote of no confidence is traditionally a way for faculty, and now students, to voice their concerns with college leadership. While the vote may cause the Board of Trustees to take note, it doesn’t have the power to remove Rochon.

Peyi Soyinka-Airewele, professor in the Department of Politics, said there is currently a straw poll going around faculty to gather more opinions about a no confidence vote. She also said there is a difference between asking faculty if they have confidence in Rochon and if they want to take a vote of no confidence, but she said she thinks such a vote is very likely to be held.

“I think a majority … would probably say they have no confidence in him, but some might say they are not convinced that a no confidence vote is in the best interest of the institution,” she said.

Peter Rothbart, chair of the Faculty Council, said there are discussions among faculty, and he suspects something will be going forward to Faculty Council. He said there was a vocal group of faculty discussing the issue, but he was totally impartial.

Rothbart said he didn’t know how a vote of no confidence among faculty would work. For the motion to be passed in Faculty Council, it would have to be initiated as a motion from a faculty member, be discussed by the executive committee and then be discussed at the Faculty Council meeting.

Soyinka-Airewele said the vision of the institution has become more murky during Rochon’s tenure, which began in July 2008, as he has jumped from one plan to another.

“There’s a sense the president is alienated from what actually happens at the college,” she said. “He doesn’t really understand what’s happening in the classrooms, the programming and how they fit into each other.”

She said there are a variety of reasons faculty are unhappy, including that Rochon de-prioritizes classroom learning and that there is a lack of office space for faculty. Staff morale is low, there has been administrative instability and both students and faculty believe Rochon is inaccessible, she said. She also said faculty were concerned about the college’s response to racial issues on campus, the college’s new marketing strategy and the 2012 student media policy protests.

She said faculty are worried about Rochon’s “authoritarian” leadership style.

“If President Rochon had a different administrative style which actually brought best practices from those who are implementing them, we wouldn’t be going through this process instability,” she said. “Because it’s authoritarian, it comes from what he views as a vision, which is imposed, and when it fails, he changes again.”

She said faculty have been discussing their confidence in Rochon for the last couple of weeks.

“It was initially structured not as a vote but as a loss of any hope that the president would be able to transform the situation and turn it around,” she said. “And gradually, it began to crystallize into people saying, ‘Why can’t we take a no confidence vote?’”

Faculty are currently trying to figure out the logistics of such a vote, she said. Some colleges and universities go through the schools, she said, while others go through the faculty council. She said it looks like the vote would go through Faculty Council.

When asked about a faculty or student vote of no confidence, Rochon wouldn’t speculate about what he would do in response to the vote.

Nick Kowalczyk, an associate professor in the Department of Writing, said he had no confidence in Rochon.

“There’s a bunch of changes that need to happen, but in no way is he the leader to deliver those,” he said. “I don’t trust him. I don’t trust his leadership. I think he has proven himself recalcitrant in the face of criticism.”

Jeff Cohen, an associate professor in the journalism department and the director of the Park Center for Independent Media, said he was on the periphery of the conversations, but it was hard to get work done with all of the emails from concerned faculty. He said he has not seen such campus unrest since he arrived at the college in 2008.

Bob Sullivan, an associate professor in the Department of Communication Studies, said the Blue Sky Reimagining Kick-Off event was the catalyst for the talk of a no confidence vote. He said the high-impact practices described at the event, such as undergraduate research, internships, study abroad, first-year seminars and small classes, were the backbone of the college.

“It was described in a strange way as being separate from a rich intellectual and classroom experience,” Sullivan said. “I don’t think anybody, no matter how deeply invested they are in immersive education, would make that division. It’s a false dichotomy.”

Sullivan said it was a sad time for the college. He said the vote of no confidence was a drastic step that shouldn’t be taken lightly.

“It’s like a declaration of war,” he said. “To say you have no confidence in an administration or in someone is saying we have no business with each other. How do we discharge our ethical responsibilities to the institution and our students if we don’t have that relationship with our own administration?”

Donald Lifton, associate professor in the Department of Management, spoke at the Oct. 27 “Addressing Community Action on Racism and Cultural Bias” event during the Q&A session and asked Rochon to step down. He said he hopes the Faculty Council holds a referendum of no confidence.

“The best contribution that Dr. Rochon can make to an institution — that I trust he loves — is to now step aside — to give us all a fresh start at reform,” he said.

Faith Meckley and Sophia Tulp contributed reporting to this article.