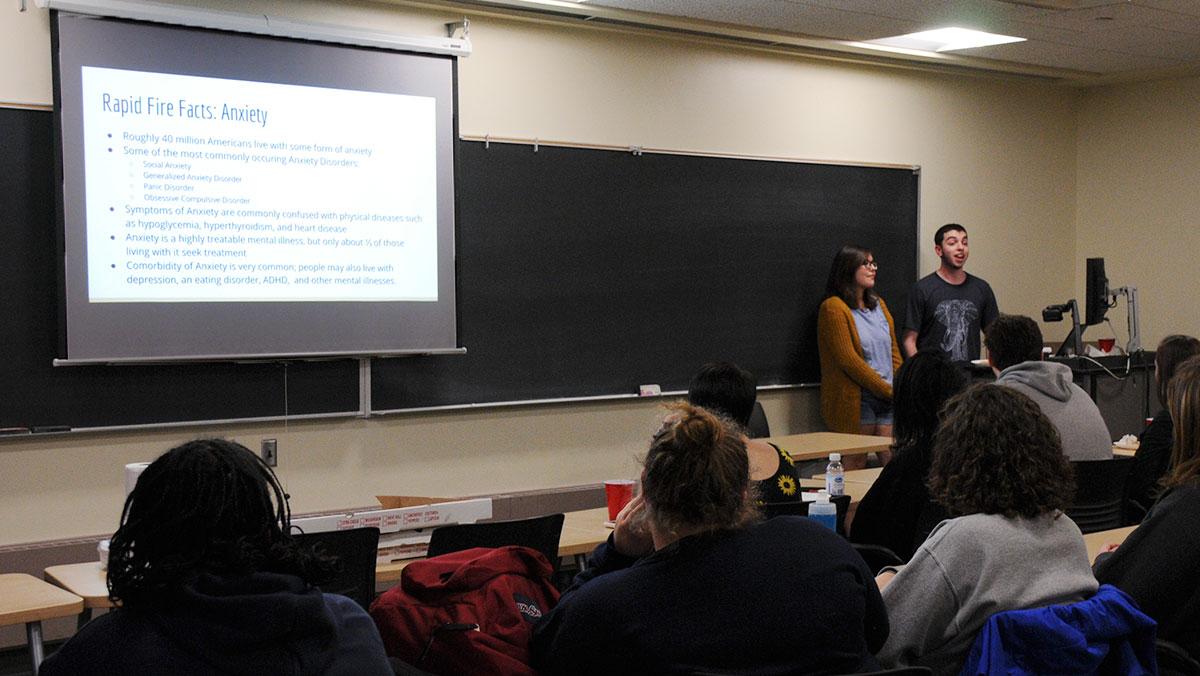 Approximately 30 students attended the event March 24 in Williams Hall hosted by Active Minds, a student organization focused on spreading awareness of mental health and mental illness. The organization’s co-chairs, juniors Summer Lewis and Matt Hirsch, planned and hosted the event. The event featured short clips portraying different types of mental illness, including suicide, depression, anxiety and bipolar disorder. After each clip, the group discussed how the illness was being portrayed.

Hirsch said the idea for this event came from his passion for stand-up comedy and recent recognition of how often comedians use mental health as material. He said events like this one are important because of how rarely people talk about mental health, regardless of its occurrence in media.

“I think, even though we’ve come a long way, even in places like Ithaca College, where we’re very liberal and we are very open-minded to a lot of ideas, mental illness is still considered taboo, and there’s still a large stigma surrounding it that prevents people from being open to talking about it,” he said. “I think if we get the conversation going, it might spread.”

Junior Mike Levine, who is diagnosed with depression and anxiety, said he thought using comedy to discuss mental illness was helpful because comedy helps people cope with mental illness. He said he appreciates having a safe space to talk about mental health, especially on campus.

Freshman Eva Chebishev said she joined Active Minds in the fall because she loved its goals and purpose. She said she tries to attend every event not only as a supporter, but also as a learner. She said her favorite clip shown was one from “What About Bob?” a movie about a man dealing with mental illness. Chebishev said she first watched the movie in a high school health class and had a much different perspective than she did at the event.

“I was a lot more ignorant about the world of mental health and mental illness,” she said. “When I saw that short clip, I kind of saw it through a different lens now that I know so much more.”

Levine said he most liked the clip shown from “Silver Linings Playbook,” a movie that portrays two characters dealing with mental illness. He said the dialogue between the characters was natural and accurate. The clip showed the two discussing their medication at a table while their friends looked at them silently and with puzzled faces.

“I just think that … was very real and relatable to people struggling with mental health,” he said. “I thought that was a really interesting scenario to put in a popular movie.”

Chebishev said this event, in particular, is important for the organization because it fulfills Active Minds’ goals and embodies its motives.

“I think it’s really important to educate the public and just try to spread awareness and advocate mental health and crush the stigma of mental illness,” she said. “We always say not everybody has a mental illness, but everyone has mental health, so no matter who you are, you can benefit from learning about this.”