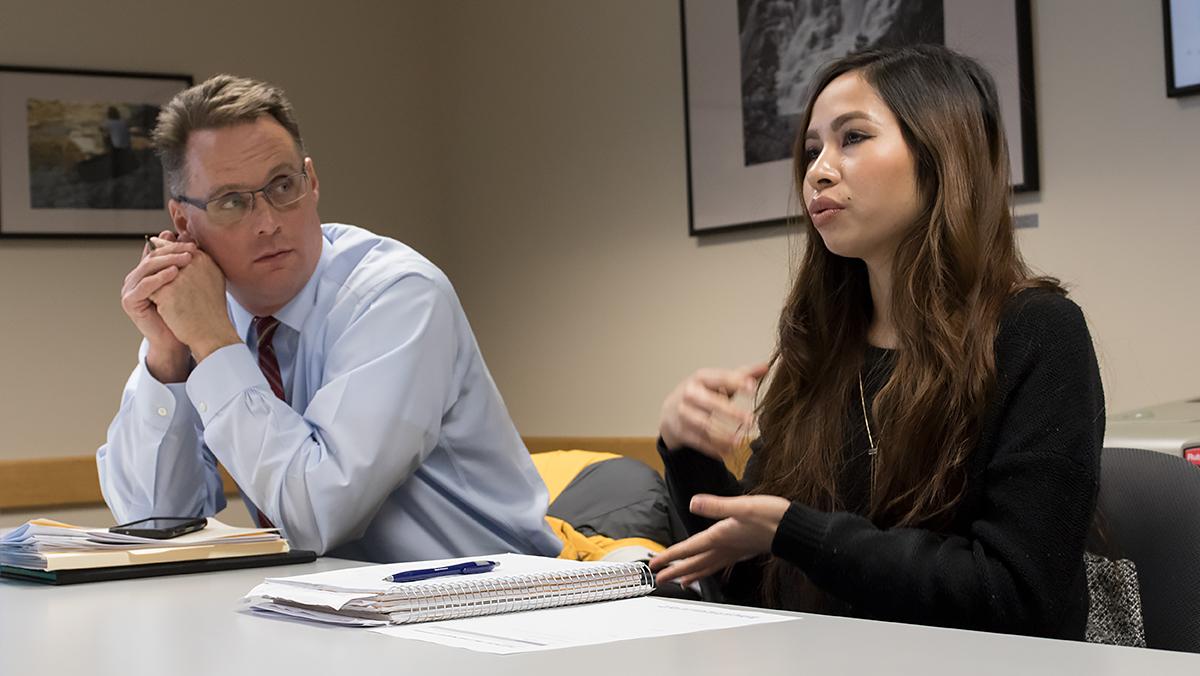 Andrew Treves/The Ithacan
Greg Lischke, director of energy management and sustainability, and Nga Ruckdeschel, a sophomore sociology major, listen to one of the three finalists for the sustainability coordinator position who were brought onto campus for open interviews in late January and early February.
By Meaghan McElroy — Staff Writer
Published: February 21, 2017

A new sustainability programs coordinator has been hired at Ithaca College, filling a position that has been vacant since Mark Darling left the college in January 2016.

Following a search process that began in October, the search committee has selected Rebecca Evans, who will assume the position in April. Evans has most recently worked as an assistant project manager for the Sustainability RVA Project, a plan dedicated to making the Richmond, Virginia, area more environmentally sustainable over a 35-year period.

The sustainability coordinator is a position in the Department of Energy Management and Sustainability created with the intention of coordinating environmental efforts among students, faculty and staff, as well as organizing outreach to the Ithaca community.

Senior Josh Enderle, student manager of the Eco-Reps program at the college and a member of the search committee, said he felt confident in the hiring of Evans, especially considering the projects she tackled during her time as an undergraduate student at Lynchburg College. While there, Evans helped create a greenhouse project to grow herbs and vegetables for dining services to use.

“I’m glad that we got someone that seems very excited and has experience,” Enderle said. “Not specifically working with colleges, but as a college student herself, she started a lot of projects on her own campus and made a difference.”

Evans’ hire comes at the end of the second round of a sustainability coordinator search, with the first round’s almost being declared a failed search at the end of November. The search committee brought three new final candidates to the college for open interviews in late January and early February. Greg Lischke, director of energy management and sustainability at the college, said in a previous interview that the initial search was not able to attract a viable candidate.

“For a multitude of reasons, we were not able to attract them to Ithaca College,” Lischke said. “I felt that all three candidates were very qualified.”

There have been many vacancies and transitions in sustainability positions at the college over the past few years. Lew Durland was the first director of energy management and sustainability when he was hired in May 2014, but he died suddenly after a year in his role. Shortly thereafter, Jerone Gagliano was hired to the position but resigned within the same year, citing family reasons. Lischke was hired as director in May 2016. Darling had planned to retire before Durland’s death but stayed in his position to help with the transition. Darling left the college in January 2016 after working in various positions for nearly 30 years.

Ithaca College is in the process of finding out just how sustainable the Athletics and Events Center is, culminating years of planning and construction.

Mark Darling’s work responsibilities are no longer limited to Ithaca College. City of Ithaca Mayor Svante Myrick tapped Darling, the college’s sustainability coordinator, as one of two new commissioners on the city’s Board of Public Works earlier this month.