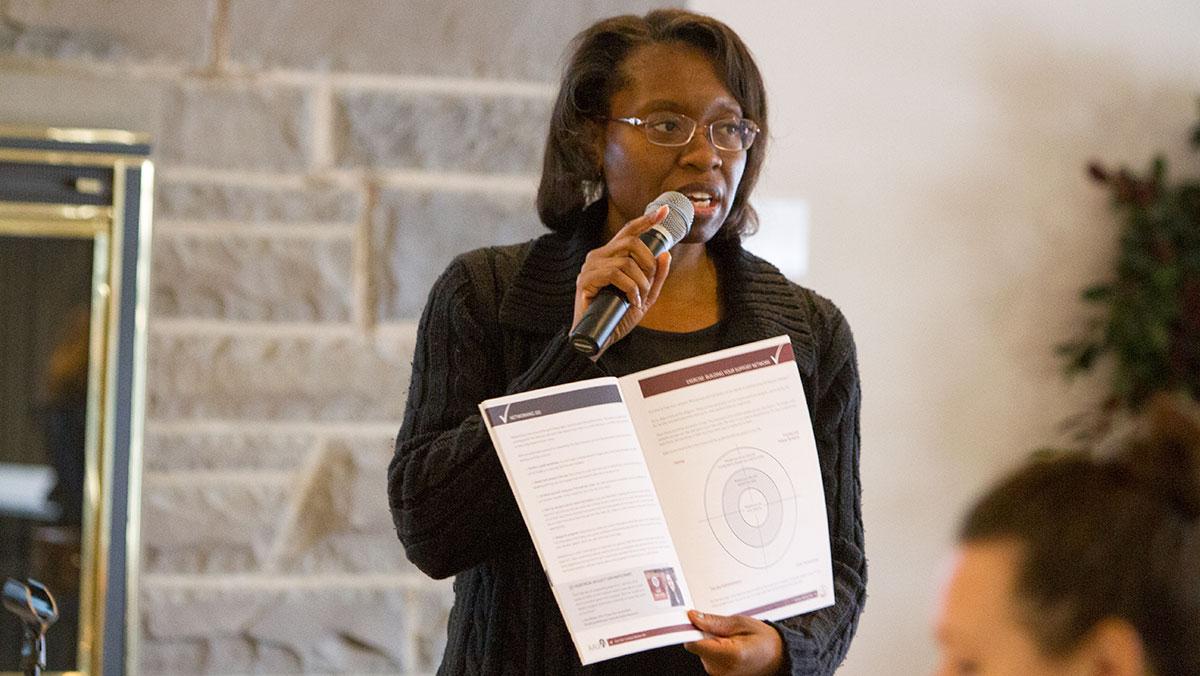 Amanda den Hartog/ The Ithacan
Tara Andrews, the Elect Her facilitator from the American Association of University Women speakers bureau, led exercises that emulated the development of a campaign as part of the Women Leaders Series.
By Yane Ahn — Staff Writer
Published: February 25, 2015

Ithaca College is holding its second Women Leaders Series from Feb. 21 to March 21, a month of workshops and discussions designed to provide learning opportunities for women who are in or want to be in positions of power.

Michele Lenhart, director of Student Leadership and Involvement in the Office of Student Engagement and Multicultural Affairs, said it is the goal of the Women Leader Series to help women identify their leadership voice and express themselves in the way they want to, rather than how they think they should in a patriarchal society.

Though the series of workshops is in its second year, the college remains one of the only college campuses to host Elect Her — Campus Women Win, a training program for women running for elective office and have students attend the Women in Leadership Experience retreat to Seneca Falls, New York, both for the third year in a row, Lenhart said. She said the college applies for the two programs through the American Association of University Women.

OSEMA funded the Elect Her event this year, whereas in the past the AAUW had sponsored it, Lenhart said.

Elect Her, which took place in the Klingenstein Lounge on Feb. 21, was a 4-hour-long training session for women interested in running for leadership positions. Tara Andrews, the Elect Her facilitator from the AAUW speakers bureau, led the exercises that emulated the development of a campaign. Martha Robertson, congressional candidate and Tompkins County Legislator, spoke on her experience running for U.S. Congress. The event also featured a panel that included women currently involved in the Student Government Association, including seniors Crystal Kayiza, Ayesha Patel and Sam Gibble, and sophomore Kaitlin Logsdon. Courtney Brown ’14, an integrated marketing communications graduate who works at Imagitas, a marketing consultant company in Massachusetts, also spoke about how to deliver a campaign message to an audience.

Katie Hellmann, residence director of Eastman and Lyon Halls, has played an active role in expanding the Women Leader Series. Hellmann said she focused on engaging more students on the intersectionality of gender and other aspects of their identities.

Hellman and Lenhart are facilitating events on their own and in collaboration with several students, including sophomores Rachel Gray, Allie Latini, Katrina Clark and Sarah Logsdon; junior Samantha Guter; and senior Grace Schroeder. Hellmann said she sent out a notice on Intercom and asked a few people who had presented in the past to facilitate SLI events in the series this year.

Topics will include the meaning of feminism, female representation in positions of power, the intersection of religion and gender, and specific workshops preparing women for the workplace.

Gray is also the president of Open Mic, which will present a special Open Mic Night on March 18 for people who want to talk about feminism or play a song that relates to gender issues.

Gray said it’s important to have these kinds of discussions with different forms of media.

“This is a good platform to kind of talk about it in a different way and put a different light on it,” Gray said.

The Women Leaders Series will conclude with the Women in Leadership Experience on March 21 in Seneca Falls, New York. The retreat’s theme for this year is “Busting Stereotypes” and will offer an opportunity of networking and discussion among participants, including a trip to the Women’s Rights National Historical Park and Museum, according to the OSEMA page. Preregistration opened Feb. 1, but Lenhart said all seats were filled by Feb. 10.

Hellmann said she hopes people will have a better understanding of themselves after attending these events.

“I hope that women leave educated on either new issues or how to take better care of themselves, or have the opportunity to explore their own identity,” Hellmann said.