Ithaca College’s Class of 2018 received not only diplomas but also advice from speakers, who urged the graduates to be active and inquisitive community members, during the college’s 123rd Commencement ceremony May 20. 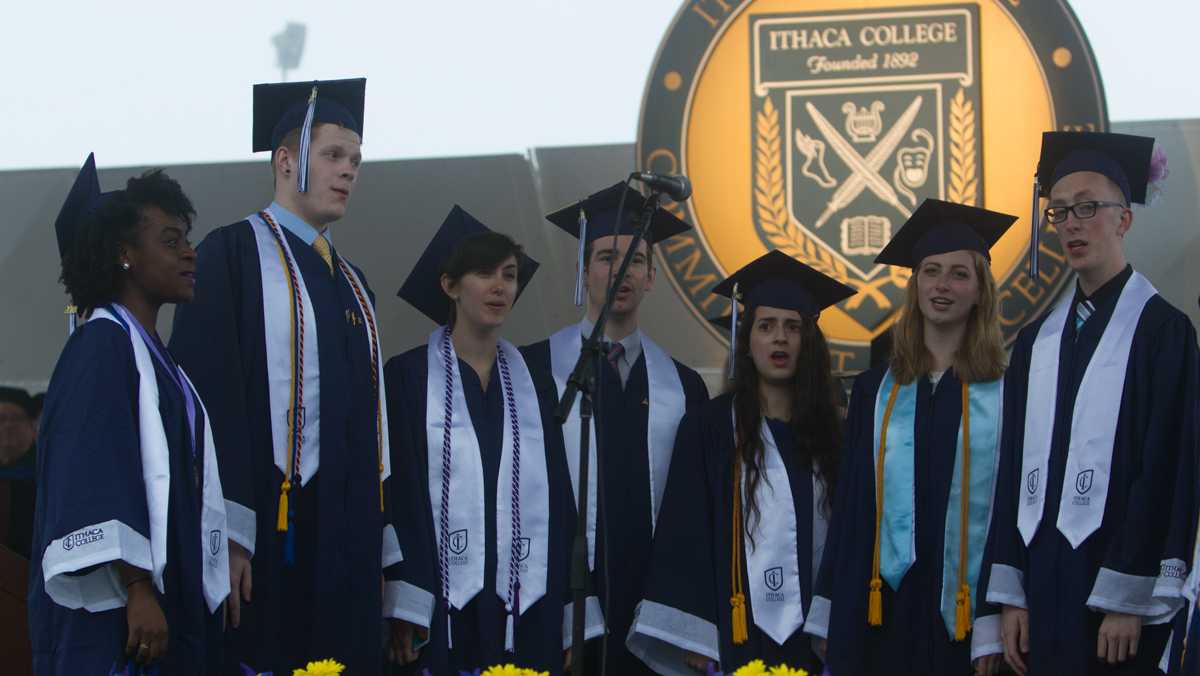 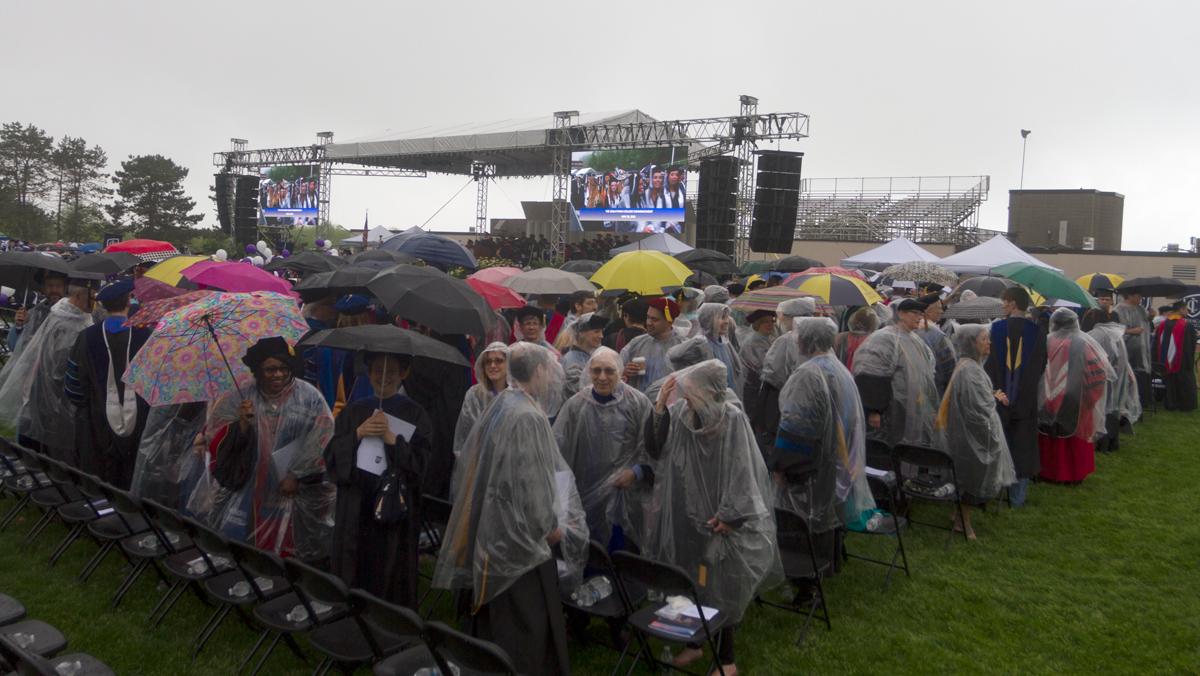 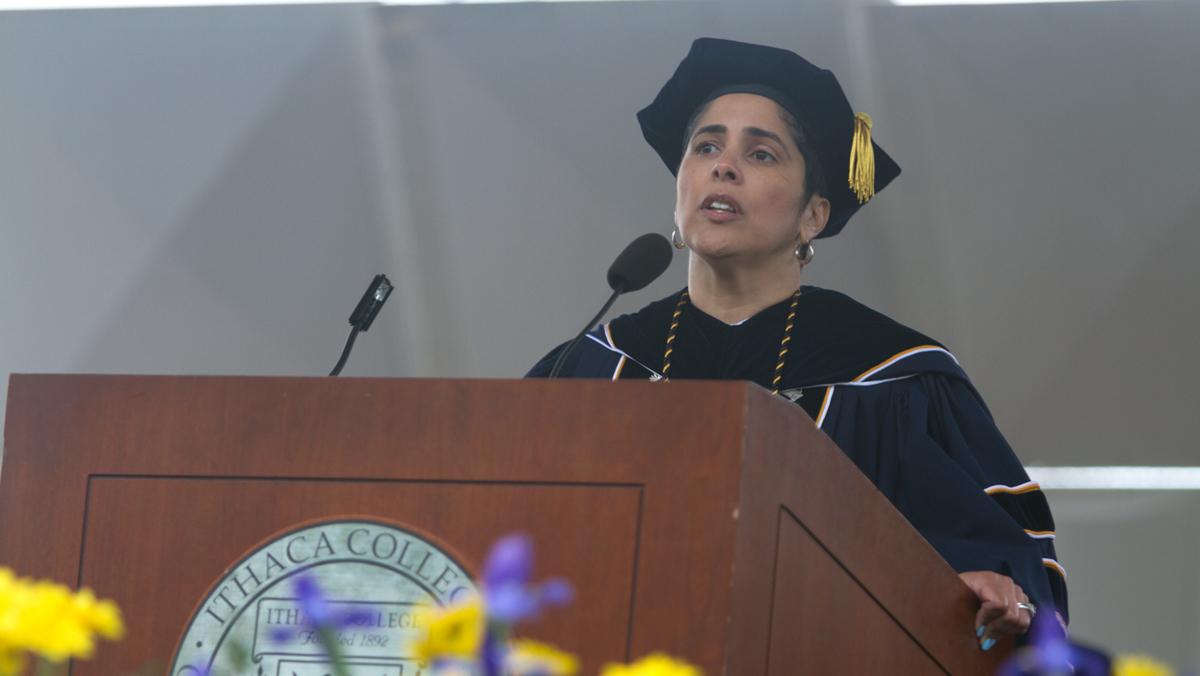 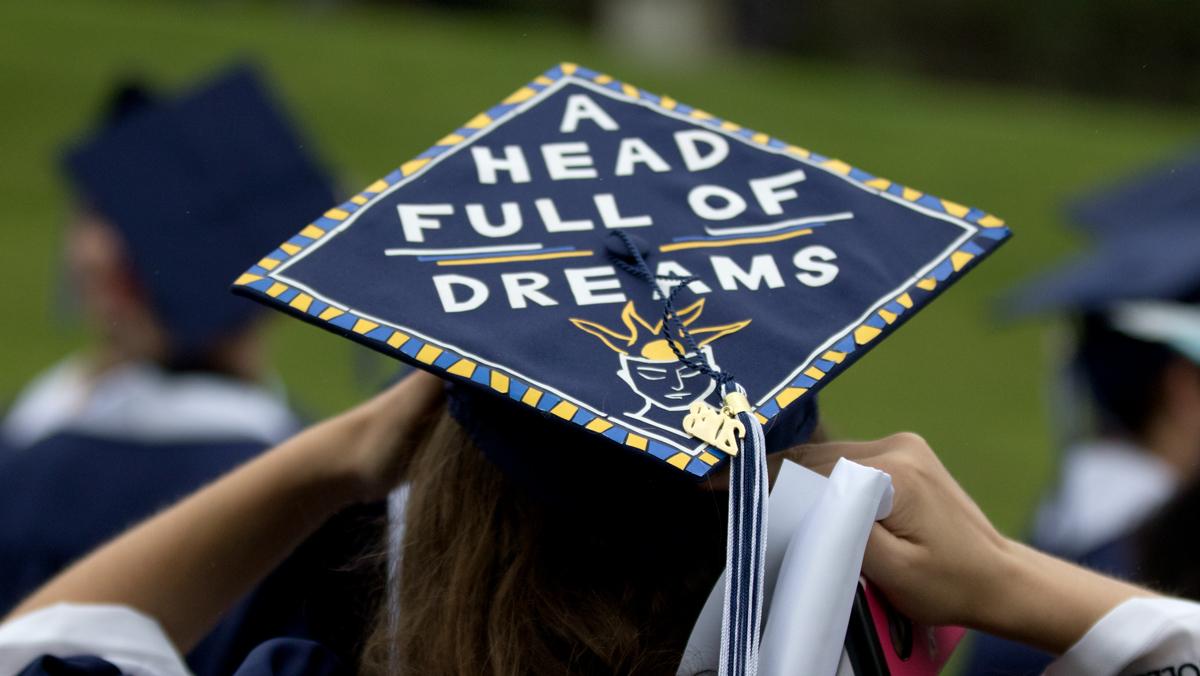 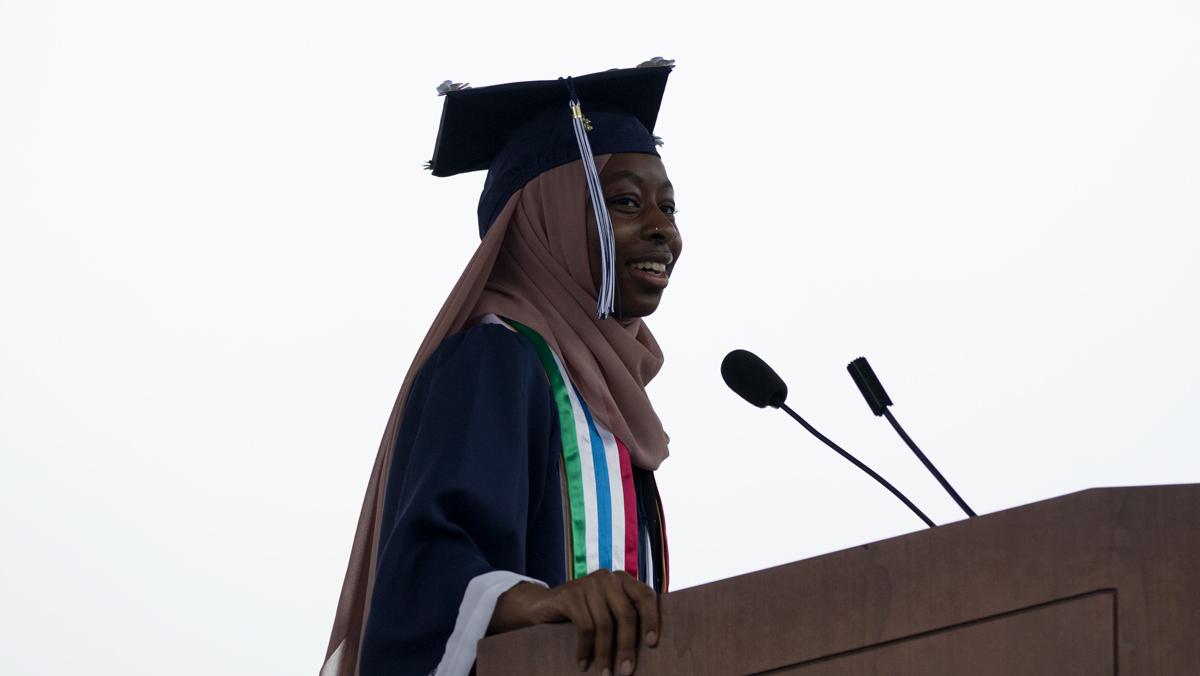 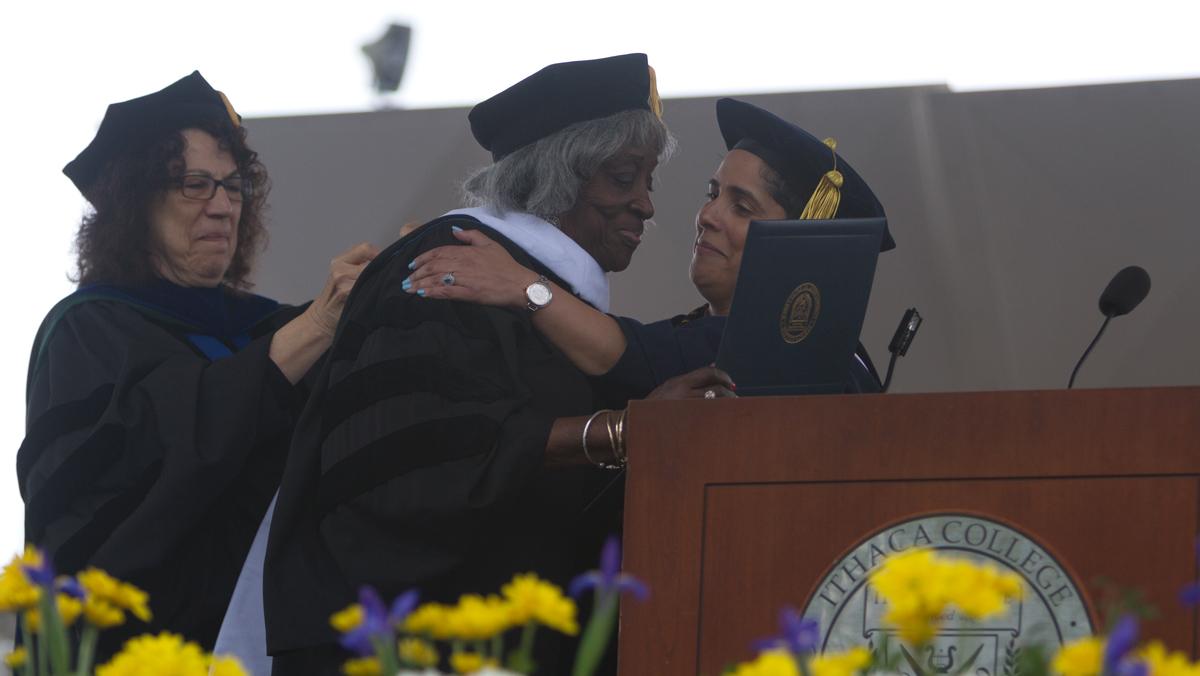 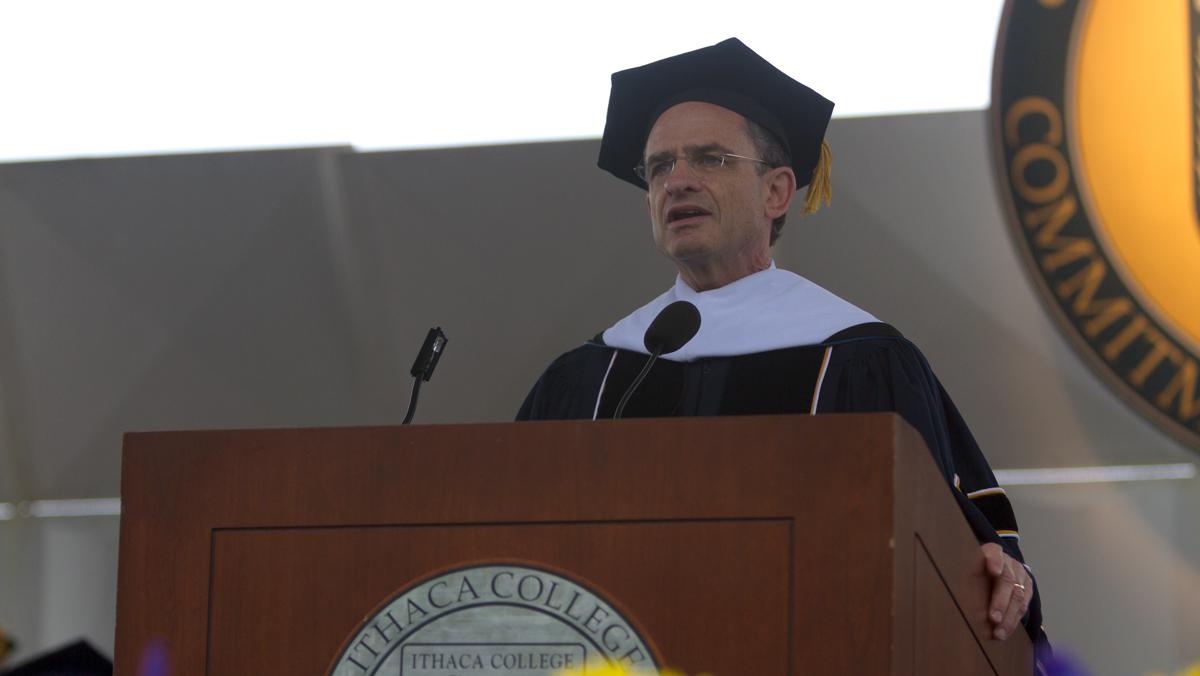 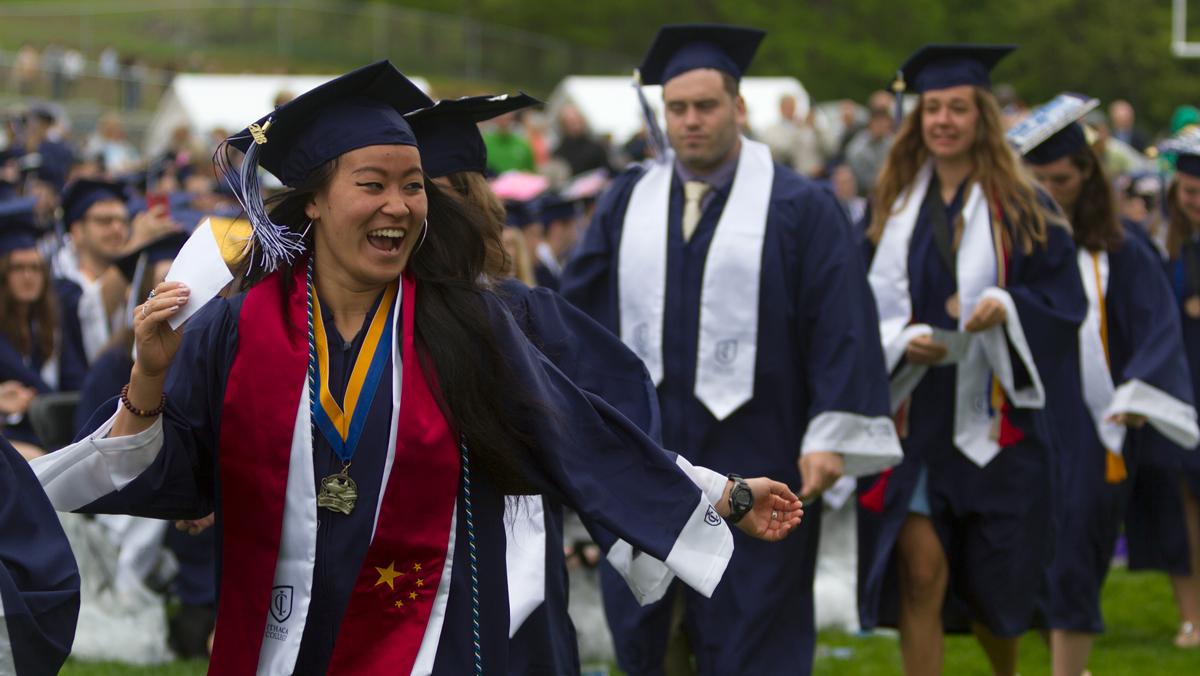 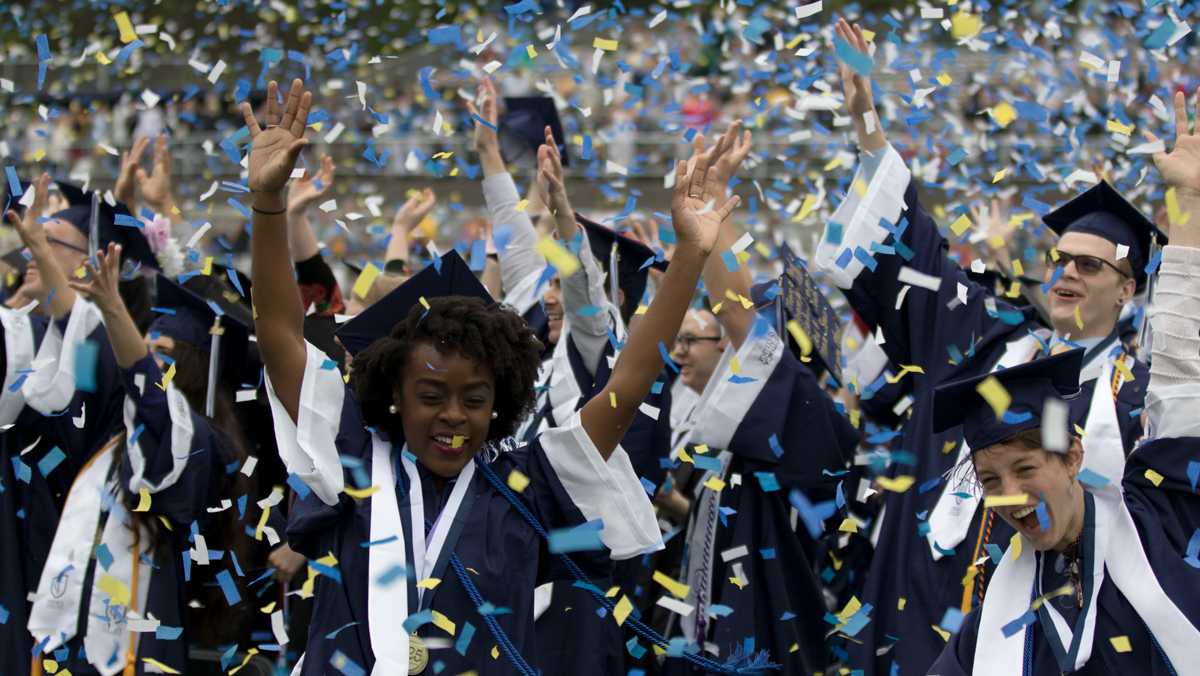 Nearly 1,400 graduating students walked across the stage and had their names read while receiving their degrees, a change from previous ceremonies. The names of individual students have not been read during Commencement for over two decades. The graduation ceremony was over three hours long, whereas previous ceremonies were usually between 60 and 75 minutes long.

This was President Shirley M. Collado’s first Commencement ceremony at the college. Collado gave honorary degrees to Gloria Hobbs, honorary trustee of the college; Mara Keisling, an American transgender rights activist; and Daniel H. Weiss, president and chief executive officer of the Metropolitan Museum of Art. Hobbs was the first African-American to serve on the Ithaca College Board of Trustees, elected in 1972. Keisling co-authored two widely cited reports on the experiences and challenges faced by transgender people in America. Weiss served as president at Haverford College and Lafayette College.

Collado urged the Class of 2018 to adopt a sense of urgency in their responsibility to themselves and to one another. Each graduate also received a Class of 2018 presidential medallion from Collado when crossing the stage. The medallion included a quote from Supreme Court Justice Sonia Sotomayor which Collado said aptly conveyed this message.

“You are in the midst of an extraordinary life,” Collado said. “Now is not the time to rest. … Our humanity makes us part of something greater than ourselves. This is the essence of what it means to fully, fearlessly and actively participate in the construction of our collective experience as human beings.”

Weiss gave the Commencement address. He said gestures of positive change of all magnitudes are important, but small gestures are especially essential in the creation of one’s character.

Weiss gave the Class of 2018 five suggestions — listen more than talk, think of kindness as an important choice, view fairness as a moral obligation, find passion and focus on the journey, not the race.

“Each of these suggestions concern values, perspectives and behavior, all of which shape character,” Weiss said. “These may seem obvious, but in my experience, they are not.”

Weiss also said students must utilize the tools given to them by the college to continue exploring the complexities of society and to combat ignorance.

“What matters most is not that you find the answers, but that you take an interest in the questions,” Weiss said. “This is what lifelong learning is all about, and it’s what makes the world a very interesting place.”

Senior Fatoumata Jallow, Class of 2018 president, said the senior class executive board viewed the change up of the Commencement ceremony, specifically the reading of student’s names on stage, as a shift to a more student-oriented experience. The petition created by parents of students at the college said reading the names of graduating students is a proper acknowledgment of the hard work required to earn a diploma.

“The power to use your voices collectively to create change was a profound achievement that the Class of 2018 has made,” Jallow said.

Jallow also encouraged the Class of 2018 to embrace and benefit from the failures they will inevitably face after graduation.

“I hope you learn to fail because that makes you a step closer to your success,” Jallow said. “Don’t fret about the job rejections and the graduate school rejections. Better will come. Learn from it.”

Metropolitan Museum of Art CEO to give commencement speech