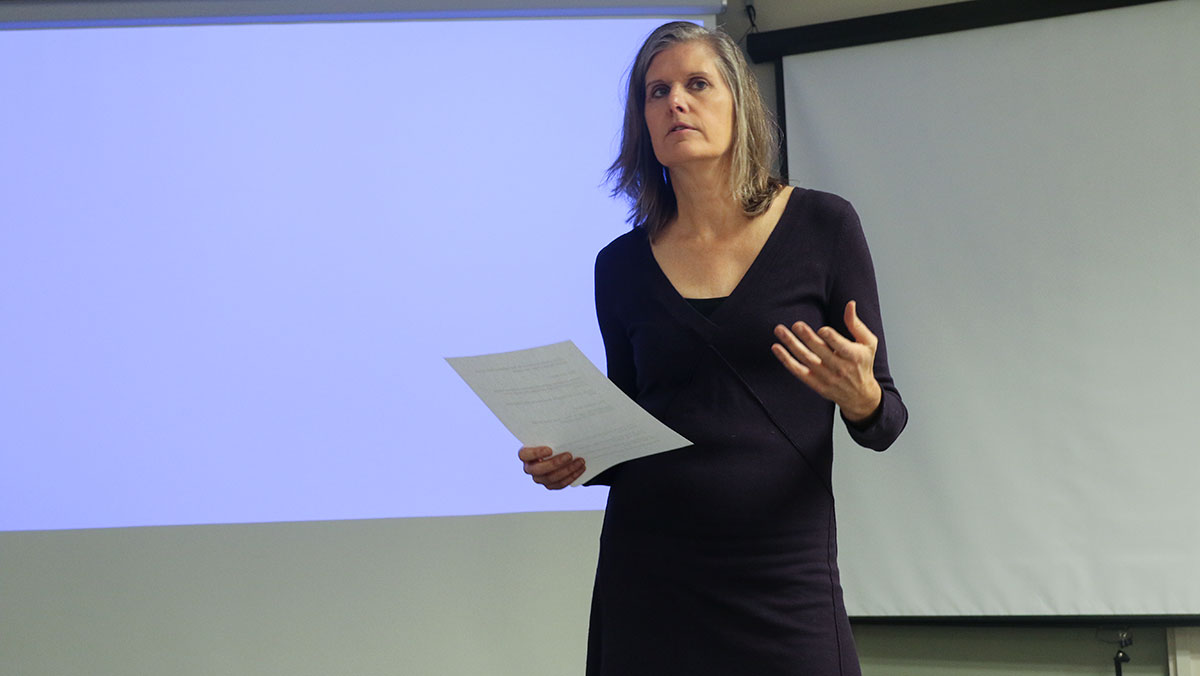 Kayla Dwyer/The Ithacan
Sandra Steingraber gives a presentation on expanded gas storage in old salt caverns on Seneca Lake Feb. 24 at Cornell University. She was the keynote speaker April 13 at an Ithaca College panel, sharing her experience dealing with climate change in Ithaca and at the United Nations in December 2015.
By Annika Kushner — Staff Writer
Published: April 16, 2016

The event, titled “After the Paris Accord,” featured keynote speaker Sandra Steingraber, a distinguished scholar-in-residence in the Department of Environmental Studies and Sciences, and five panelists. The six shared their experiences dealing with climate change in Ithaca and at the United Nations negotiations of the Paris Accord in December 2015 — a draft of a treaty to reduce climate change negotiated by representatives from 195 nations.

The other panel members were Robert Howarth, professor of ecology and environmental biology at Cornell University; Allison Chatrchyan, director of the Cornell Institute for Climate Change and Agriculture; Johannes Lehmann, professor of soil and crop sciences at Cornell; Thomas Shevory, professor in the Department of Politics at the college; and Colleen Boland, a member of the steering committee for the civil disobedience group We Are Seneca Lake — a group Steingraber is also a part of.

Steingraber spoke first, explained the importance of the treaty and discussed the prevalence of “climate helplessness,” the idea that people believe the science behind climate change but do not understand how to react or initiate change.

Howarth said many people at the Accord negotiations in Paris were aware of Tompkins County and its leadership role in promoting sustainability — specifically, its work on banning fracking. The Tompkins County Legislature banned fracking April 21, 2015, as a result of grassroots pressure. That set a precedent that led to a New York state fracking ban July 29. Chatrchyan talked about the leadership of the French government and the structure of the treaty.

Lehmann spoke about the importance of strengthening and managing agriculture as a result of increased topsoil depletion and groundwater contamination. Shevory read part of a blog he kept while in Paris, and Boland talked about the work of We Are Seneca Lake.

“Our irrefutable message is the time to act is now,” Boland said. “That means right now. It means all of us. It means the young and the old. … Come join us. We need to do this. It’s time.”

When the panelists finished speaking, dozens of audience members stood in line, waiting to ask questions.

Junior Summer Lewis said she particularly appreciated Shevory’s contribution, a presentation on one of his blog entries detailing his experiences at a panel titled “Global Women & Indigenous Peoples on the Frontline of Climate Solutions: Forests & Renewable Energy.”

“As someone who’s Native American, I really value that kind of thing,” Lewis said. “I think indigenous people’s opinions have been really disregarded, even though they’re really, really valuable. Especially to the environmental movement.”

Mary Bentley, associate professor in the Department of Health Promotion and Physical Education, said she would have liked to hear more about individual conservation and lowering consumption rates, but said she understood there was limited time.

“We’ve got to stop. We’ve got to cut our consumption by 75 percent. And we can do that effectively and have a better lifestyle in many, many ways,” Bentley said.

Benjamin Rifkin, provost and vice president for educational affairs, attended the event and offered both introductory and closing remarks.

“A lot of what we heard tonight is terrifying, but a lot more is inspiring,” Rifkin said. “And I think it is the obligation of each one of us to feel inspired, to take courage and to move forward with that optimism — to help be a part of the solution.”