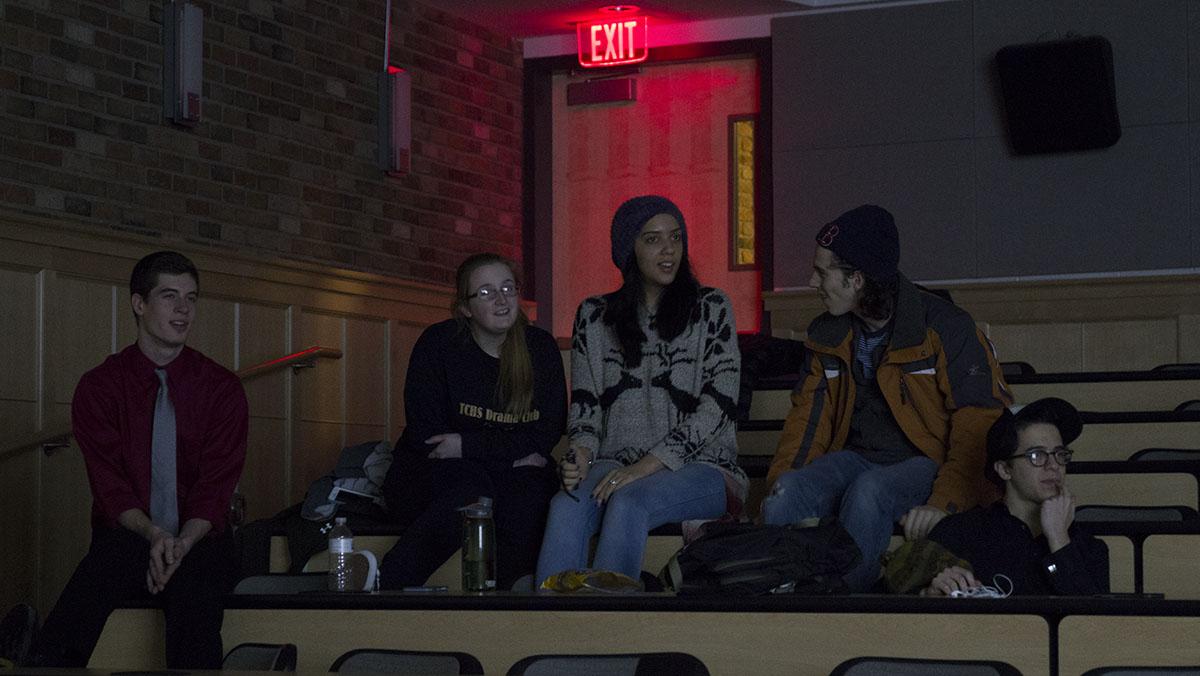 Relaxed chatter and laughter filled the Textor 103 lecture hall as approximately 20 students gathered to participate in an hour-long game of Black History Jeopardy on Feb. 11.

The event, sponsored by the Office of Residential Life, was the third in the Continuing Conversations series and a part of the #IC4Justice campaign spearheaded by Residential Life. The campaign aims to continue to build awareness and discuss social justice issues relevant to Ithaca College. Continuing Conversations was created by resident assistants as a way to spread diversity awareness among residents and was coordinated by Resident Director Katie Hellmann.

Martin Petrella, resident director of Boothroyd, Rowland and Tallcott halls, helped to coordinate and brainstorm ideas for the event, as well as advertise and put together the questions that were used during the game. Petrella said the event was powerful for both RAs and students.

“As we saw through answering the questions, we are not taught full black history in primary and secondary schools,” Petrella said. “This event helped remind us that our knowledge of history is often incomplete, and we should always strive toward educating ourselves about the history, tragedies and accomplishments of the communities that make up American and global societies.”

The Jeopardy game, formatted like the popular TV show, featured trivia about current events and facts about both modern and historical black leaders. Students were divided into three teams, and the categories were Black Women’s History, Current Events, Science & Technology, Music, Politics and Art & Culture.

Some questions provided facts about the events currently happening in the U.S. For example, one of the questions acknowledged that although black men make up only 6 percent of the U.S. population, they accounted for 40 percent of the unarmed men fatally shot by police in 2015. Another question inquired about the founders of the Black Lives Matter Movement: Alicia Garza, Opal Tometi and Patrisse Cullors.

Other questions provided facts about prominent black leaders in U.S. history. Attendees learned about Charles Hamilton Houston, known as “The Man Who Killed Jim Crow,” who “worked as a lawyer, went to Harvard Law School, and was sickened by the conditions he endured as a soldier during World War I,” according to the Jeopardy question. Houston played a significant role in breaking down the Jim Crow laws, which segregated the U.S. until 1965.

Junior Saul Almanzar, an RA, said he came to show support for the diversity movement on campus.

“There are certain things about Black History Month that you don’t learn,” Almanzar said. “And why do we just have Black History Month? Why isn’t it a year-round thing? We learn about European and white history the whole year, so why can’t we add that into our curriculum?”

Almanzar said he and other RAs want to bring the message of the Continuing Conversations events back to their residents.

“We would like to give people inspiration to start engaging and having these conversations among the people on their floors — like starting bulletin boards, making posters about these events and about this theme,” Almanzar said.

Freshman Rachel Steinmetz, who is applying to be an RA, said she learned much about black history from the event.

“Most people don’t go to events, but you can learn so much at these events that you can’t learn in the classroom, and I think that’s really important,” Steinmetz said.

Petrella said each month’s events center around a new theme. The current February events focus on Black History Month, the March events will center on Women’s History Month, and the April events will concentrate on lesbian, gay, bisexual and transgender issues.

“The Continuing Conversations series is meant to be a structured, scheduled way for students and other community members to engage in these topics in a supported manner,” Petrella said. “These events provide a space for students who want to learn more and increase their awareness of diversity issues to do so.”