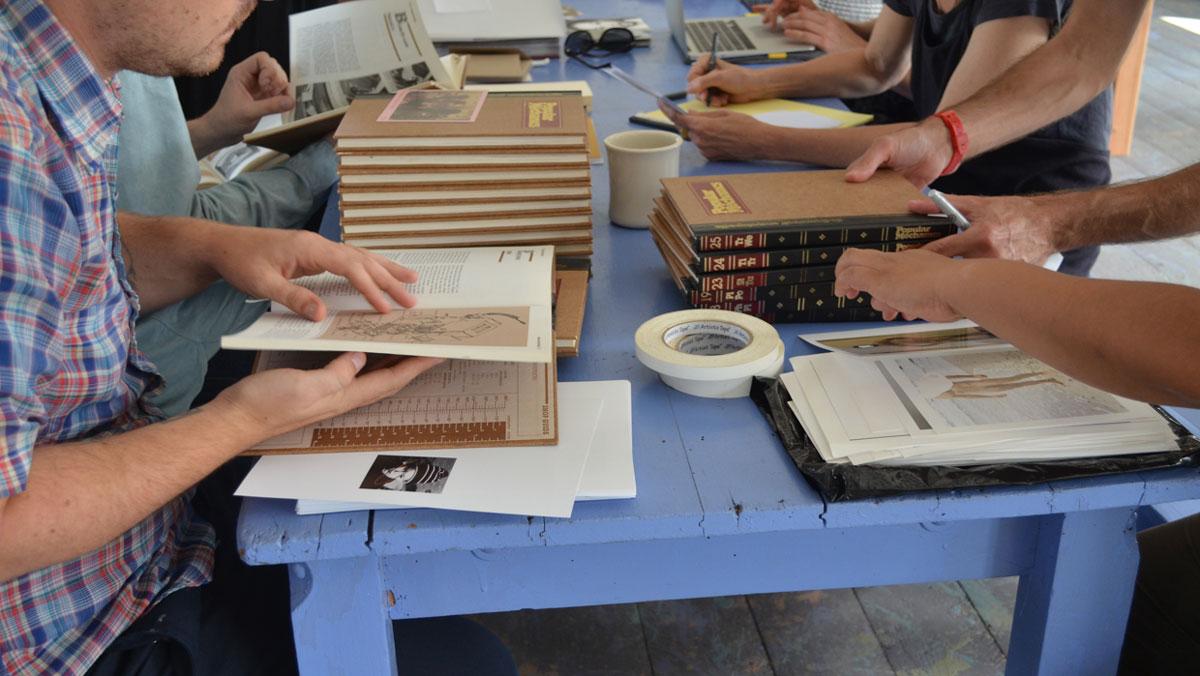 Courtesy of Image Text Ithaca
Graduate fellows and undergraduate interns collaborate at the summer 2015 workshop for a master’s program combining writing and photography. This initiative is one of several new programs in the Ithaca College School of Humanities and Sciences.
By Annika Kushner — Staff Writer
Published: March 6, 2016

By increasing collaborative efforts, the Ithaca College School of Humanities and Sciences is expanding the number and nature of its programs to attract different kinds of students and offer more diverse opportunities.

There are several new initiatives within the school, including a master’s program combining writing and photography, an agricultural education master’s program, a language consortium — allowing schools to cooperate in forming language classes — and a residential language learning community.

The master’s program combining writing and photography is a joint program between H&S and the Roy H. Park School of Communications. It is being co-directed by Nicholas Muellner, associate professor in the Department of Media Arts, Sciences and Studies; and Catherine Taylor, associate professor in the Department of Writing. In the summer of 2014 and 2015, Muellner and Taylor led summer workshops that involved both graduate fellows and undergraduate interns.

The summer sessions include many opportunities to interact with well-known writers and authors. One of these was Claudia Rankine, a prominent African-American poet, essayist and playwright who came to speak with fellows in Summer 2015.

“She loved just getting down to earth and getting down to work with the Ithaca students,” Taylor said. “The writers and artists, and even including the very well-known ones, were hungry for a rich conversation across disciplines.”

Senior Cassandra Moore participated in the 2015 summer workshop as an undergraduate intern. She said the experience helped her discover her love of self-publishing. Moore self-published a collaborative zine Feb. 29 titled “Labyrinth.” It is a work pairing text and image.

“I didn’t ever think of those two things going together before,” Moore said. “The zine would probably never have happened if it wasn’t for this program.”

Another H&S initiative is the agricultural education master’s program. It is a 36–credit, 13-month program whose incoming class will begin in June 2016 and end in July 2017. Three classes within the program will be taught by Cornell University professors, allowing their knowledge of agriculture to merge with the college’s professors’ knowledge of education.

Peter Martin, associate professor and interim chair of the Department of Education at the college, said there are very few programs like this in New York State.

Martin said the college was contacted by Cornell because the university does not have a master’s program in education but saw that there was a demand for it in this particular field. Martin said the program will host four or five students in 2016–17 and will hopefully grow. Students will emerge from the program with a degree in K–12 agricultural education.

“We have an incredibly good group of students coming in … with very diverse backgrounds,” Martin said. “We try to get students who come from as many different perspectives as possible.”

There will also be students with different perspectives involved in a third initiative to start a foreign language consortium that is still in the planning stages. The consortium, a group of five colleges that are collaborating, would allow students interested in studying higher levels of language to take classes remotely at other colleges, said Julia Cozzarelli, associate professor in and chair of the Department of Modern Languages and Literatures. Students participating from remote locations would Skype into two-thirds of the classes and would work collaboratively online with other students for the other third.

The college was first approached with the idea by Molloy College in February 2015, Cozzarelli said, and if the everything goes well, the first consortium class would be offered in Spring 2017. The first class offered would be an Italian course in film or translation, which would be taught by Marella Feltrin-Morris, associate professor of Italian and translation studies at the college.

Cozzarelli said the college hopes this program will allow for more retention and hiring of faculty as well as greater collaboration among schools. If the school does not fill higher-level language classes, students from other schools can fill them out.

Cozzarelli said she has been really enjoying working on the project.

“It’s interesting because it’s always good to think of creative ways to deliver the best instruction,” Cozzarelli said. “It’s always nice to get to know colleagues at other universities, too, and see how their experiences compare to ours.”

These initiatives are joined by La Casa, the Spanish and Italian residential learning community that will begin in Fall 2016. Feltrin-Morris said La Casa will allow a very valuable cross-cultural experience.

“It will be an opportunity to explore these cultures outside of the classroom in an environment where there are no grades and there are no expectations,” Feltrin-Morris said. “There is really no separation between language and culture, and so when you are learning one, you are also learning the other.”