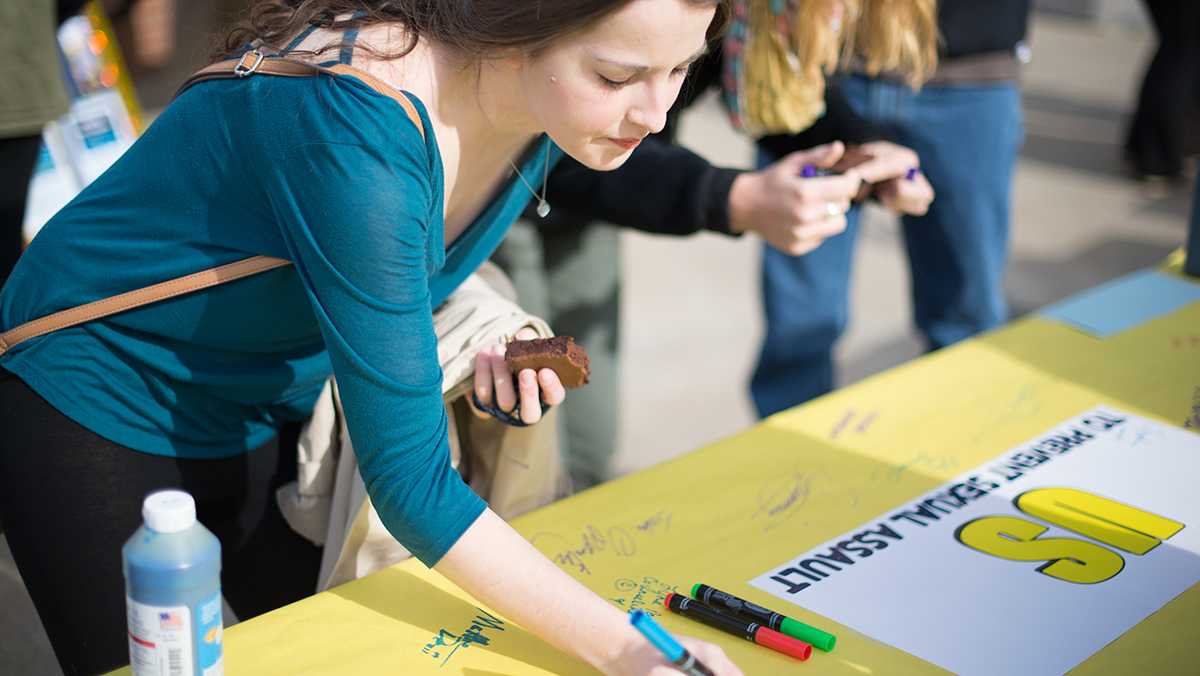 Tommy Battistelli/The Ithacan
Sophomore Natalie Shanklin signs a poster at a Sexual Harassment and Assault Response and Education event in Fall 2014. Students and administrators at Ithaca College say the college can improve its sexual assault education with more resources and dialogue on-campus.
By Tatiana Jorio — Contributing Writer
Published: May 2, 2016

With sexual assault awareness month’s coming to a close, students and administrators at Ithaca College are saying the college can improve its sexual assault education by making the college’s resources more accessible and driving a more effective conversation on campus.

Andrew Kosinuk, crime prevention and community events liaison for the Office of Public Safety and Emergency Management, said though the college does more than other schools, he thinks there are always improvements to be made and more that can be done, as does Tiffani Ziemann, Title IX coordinator. 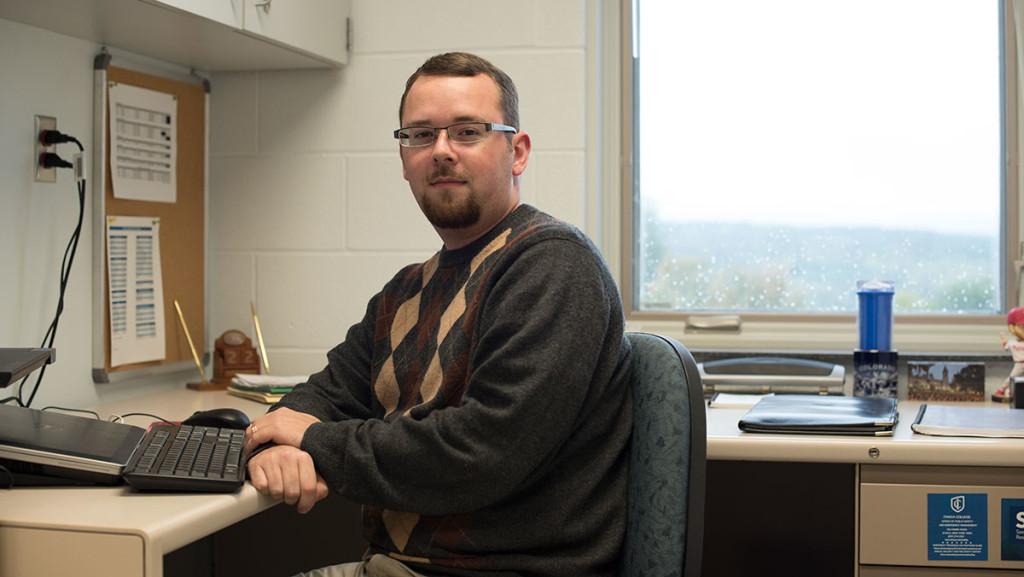 Andrew Kosinuk, crime prevention and community events liaison for the Office of Public Safety and Emergency Management, said there are always improvements to be made in regards to sexual assault education at the college. Amanda den Hartog/The Ithacan

One of the programs the college offers is Sexual Harassment and Assault Response and Education, an on–campus resource intended to educate people at the college on all types of sexual violence, with a focus on awareness and prevention. Despite the fact that SHARE is introduced to all students at orientation, Kosinuk said, he wants to move beyond the minimum legal requirements.

The Centers for Disease Control and Prevention created a White House Task Force in April 2014 on ways to educate and protect students from sexual assault. In the task force’s 2014 report, it provided a benchmark model for sexual assault education on college campuses. Components for effective education, according to the report, include policies to improve safety or climate on campus and address social norms through messages from “trusted and influential voices,” as well as training student bystanders to intervene.

The report found one-session educational programs focused on increasing awareness or attitudes are not effective at changing behavior in the long term. It stated these approaches may be useful as “one component of a comprehensive strategy”; however, they are not likely to impact rates of violence if they are the only strategy implemented.

Kosinuk said even with SHARE content presented at orientation, there is still a chance some students may not think it will apply to them; therefore, they may not pay as close attention or find the information important.

“Sometimes there are people who … their mentality is … ‘That’s never going to be relevant for my day-to-day life,’” Kosinuk said. “It’s unfortunate that people sometimes dismiss the topic until it hits home, but even if that’s ultimately where they arrive at, and it gets them to get that kind of training, better late than never.”

Complaints filed with the Title IX office, which handles cases of sexual harassment, sexual assault and discrimination, rose from 20 total in 2014–15 to approximately 25–30 in 2015–16, according to Ziemann. Despite this uptick in reporting, many students still said they did not know about all of the resources that were available to them on the college’s campus. In an informal survey circulated by The Ithacan, just over half of the 81 respondents said they did not remember learning about SHARE.

Rachel*, a survivor of sexual assault that reportedly occurred on the college’s campus, said education regarding sexual assault needs to be mandatory, with proper accountability for all students.

“People need to be made aware of the resources through possibly a mandatory course,” Rachel said. “Not in an email, not an Intercom email. The information needs to be forced and pushed forward and made really obviously clear to every student.”

Rachel said she hopes future students learn about the resources available to them before they are put in a dangerous situation. 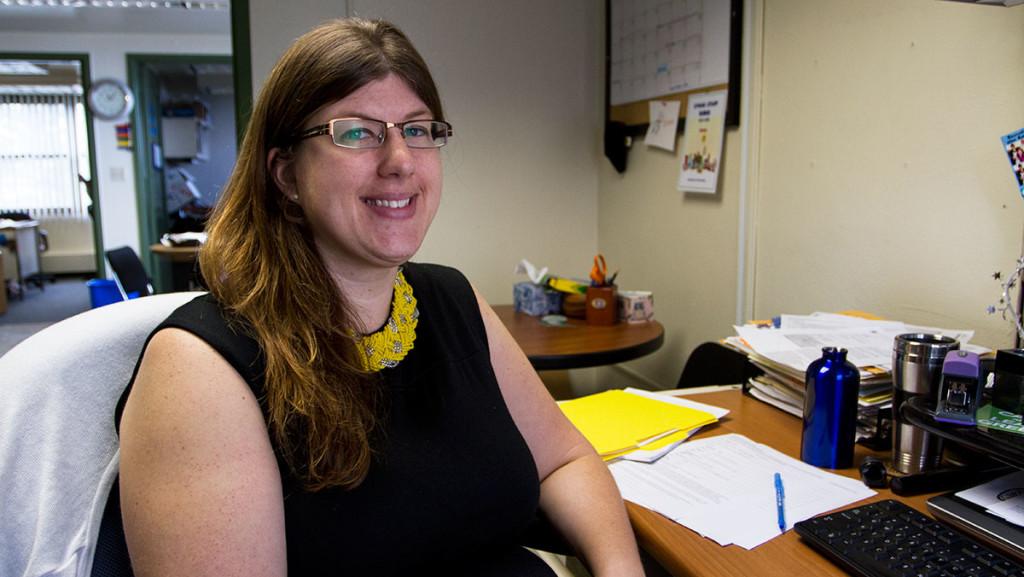 Tiffani Ziemann, Title IX Coordinator said she was disappointed that many students report not knowing about SHARE, however she is making efforts to promote education programs at the college. Corey Hess/The Ithacan

Ziemann said she was disappointed but not surprised at the fact that many students reported not knowing about SHARE and hopes it will become more known to students on campus.

“I think that there’s always ways to improve,” Ziemann said. “I think that where we can and should grow, and hopefully will grow over the next years, is in the prevention, and raising the conversation.”

She said one thing the college is going to start next year is a campus committee that looks at the college’s policies, procedures and education to analyze and gather more information about how to provide new and existing content to students.

Ziemann said students will see more advertisement of SHARE’s presence next fall, along with more outreach to student–athletes and upperclassmen.

Other programs the college offers include a Rape Aggression Defense program, called RAD, run by the Office of Public Safety and Emergency Management. The program is voluntary, consisting of 12 hours of training presented over four days for students who identify as female, and focuses on risk prevention and physical defense. In addition to this program, Kosinuk said Public Safety can do presentations in seminar classes, dorm floors and even to individual students on bystander intervention. While these resources are available upon request, many students reported they are not aware of them.

Sophomore Molly McGill is a resident assistant at the college. She said because of this, she is aware of the programs available, but she sees most students are not.

“That’s my job:  to have people be able to talk to me so I can tell them what resources to go to … but I do realize in my classes … a lot of the people don’t know what Title IX is, nor do they know about the SHARE program,” she said.

Ziemann said she is interested in learning what students want and is open to working with other students on their suggestions.

“I do think there needs to be more dialogue, but not a dialogue that just says, ‘OK, we are done talking,’ and then leaves it at that.” McGill said. “A lot of work needs to be done.”

Ziemann said the campus as a whole has not yet joined the conversation.

Looking forward, Ziemann and Kosinuk both said they hope to see progress and more opportunities available for students next fall.

* Name has been changed to protect identity