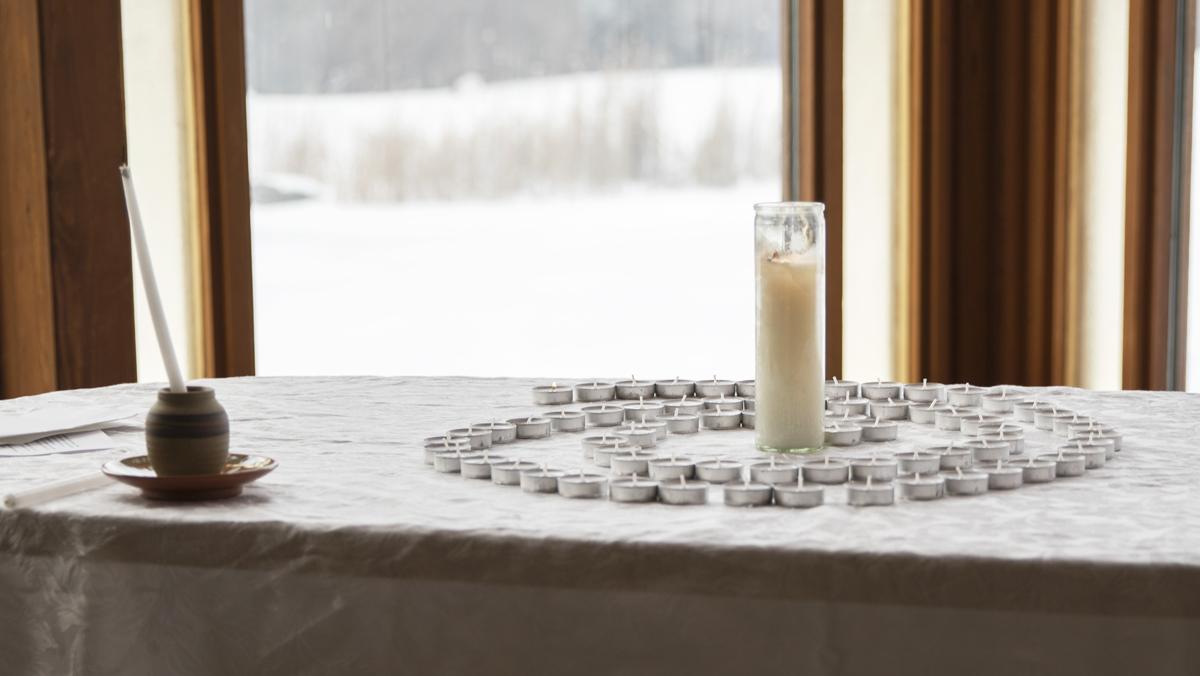 The Ithaca College community is mourning the death of a student after she was killed in a car accident March 4 while traveling back to campus from her home in Berkshire, New York. 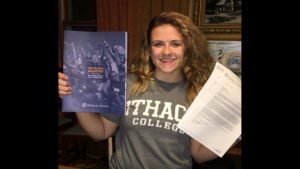 Kelly Perkins pictured with her acceptance letter to Ithaca College. COURTESY OF FACEBOOK

Perkins studied in the School of Health Sciences and Human Performance’s preprofessional program.

A gathering was held March 5 in the Muller Chapel to honor Perkins, and approximately 300 people gathered to memorialize her. At the beginning of the gathering, Hierald Osorto, director of religious and spiritual life, said Perkins had greatly affected many members of the college community.

“I often tell people that in this space, you can hear the IC community’s heartbeat,” Osorto said. “Tonight, however, this chapel amplifies our campus’ heartbreak.”

President Shirley M. Collado also offered words of sympathy to Perkins’ family, friends and others during the gathering. She said that she spoke with Perkins’ parents, Enoch Perkins, fire protection specialist in the Department of Environmental Health and Safety, and Debbie Perkins, facilities attendant at the college, and that she was grateful the campus community came together during this difficult time.

“I had the great but heavy, hard moment to talk with Kelly’s parents last night on the phone on behalf of this community,” Collado said. “They are deeply moved by all the words, the energy, the prayers and the space for them to get through what seems impossible for them right now, and they know that the IC family is standing strong alongside with them.”

In an email response to The Ithacan, Perkin’s parents desc ribed Kelly as an “angel sent from heaven” who “had a heart of gold.” They said she was a deeply compassionate and caring person and that they miss her dearly.

“Everyone was important in her life,” they wrote. “Kelly didn’t have first or seconds. Her family and friends always came first. … Kelly had no regrets in life, she always lived it to the fullest.”

Enoch Perkins also said that he and his family have been extremely grateful for the response they have received from the community. He said many people have been going out of their way to give him and his family hugs and food.

“The communities all over that have responded have been overwhelming,” he wrote. “Kelly has touched the lives of so many people worldwide. Everyone has asked how to help and the best we can say is hug your family so tight cause [sic] tomorrow is never guaranteed as we have found out.”

After brief words from Osorto and Collado, attendees of the memorial were invited to talk about their memories with Kelly and share how she impacted them. Vigil candles were available to light in her honor, as well as a poster board where people could write their memories of her or condolences for her passing.

Kelly Perkins was a student employee in the Office of Residential Life and in the parking services unit of the Office of Public Safety and Emergency Management. Though Carl Cohen, the college’s parking services supervisor, had only known Kelly for a short time, he said that her spark and maturity are what stood out to him during their time together.

“She had this positive energy surrounding her that brightened the moods of all of my colleagues, including myself,” Cohen said. “The fact that she’s gone is difficult wrap my mind around because you never realize just how much someone has affected you until they’re gone, and she left way too soon.”

Veronica Marisa, an Ithaca local and friend of Kelly’s, worked with her over the summer at a summer camp where they were both counselors. She said Kelly was compassionate toward others.

“I got stung by a bee, and since I’m allergic to bees I had to go to the hospital to get that taken care of,” Marisa said. “When I came back, she was the first person to come check up on me and see how I was doing, and that showed me that cared so much about others, no matter how long she knew them. That, to me, was really special.”

Freshman Mark Scaglione, Student Governance Council vice president of communications, released a statement March 4 on the behalf of the SGC sending its condolences to the Perkins’ family and friends.

A fraudulent fundraiser emerged March 5 on GoGetFunding.com, a crowdfunding website, which claimed it was raising money for expenses for Kelly’s funeral and claimed to be run by the college. Dave Maley, director of public relations, said that the page is not affiliated with the college and that the college has reached out to GoGetFunding to get the page taken down and have the funds returned to the donors.

Maley said employees in the Office of Public Safety created a GoFundMe fundraising page, which was authorized by the Perkins family. Over half of the $10,000 goal had been donated within 6 hours of the campaign starting.

For those seeking support, services for students are available through the Center for Counseling and Psychological Services (CAPS) by calling 607-274-3136. Faculty and staff can access the counseling services of the Employee Assistance Program (EAP) by calling 1-800-327-2255.