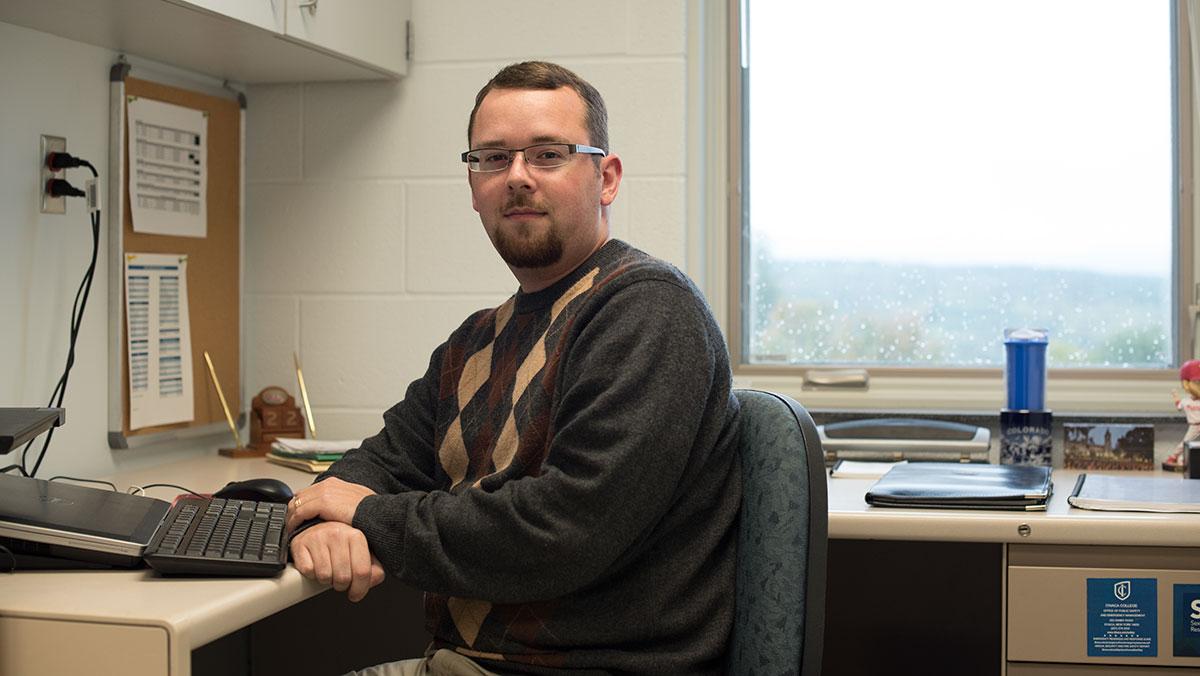 File Photo/The Ithacan
Andrew Kosinuk, crime prevention and community events liaison for the Office of Public Safety and Emergency Management, said the announcement for active shooter training was sent to remind the campus community of the resources available to them.
By Madison Fernandez — Assistant News Editor
Published: March 6, 2018

Ithaca College is offering training to prepare for active shooter situations in light of recent incidents of school and workplace violence.

The college has created initiatives for the campus community to be prepared in the event of an active shooter scenario on campus, according to an Intercom post sent by Andrew Kosinuk, crime prevention and community events liaison for the Office of Public Safety and Emergency Management. The announcement comes three weeks after the Parkland shooting, which left 17 dead at a high school.

Kosinuk said via email that these emergency response training resources have previously been available online. He said he released a message to the campus community reminding them of these resources due to a recent increase in interest.

The announcement said the college supports the “Run-Hide-Fight” response strategy which can be seen in a video produced by SUNY New Paltz demonstrating the strategy. This approach has been used at other colleges, including the Ohio State University during an attack in 2016.

This strategy provides individuals with three choices in dealing with an active shooter: running, hiding or fighting. The run component encourages individuals to escape if they can do so safely. The video said it is important to have an escape plan whenever entering a room.

The hide component should be used when it is not possible to escape safely. The video suggests individuals hide in an area such as a bathroom because it is likely to have a door with a lock. If there are no locks, the video suggests blockading the door with whatever furniture or objects are available. In the event that there are no objects that can be moved, the video suggests wedging a rubber door stopper under the door or wrapping a belt around the doorknob and pulling it tightly so the perpetrator cannot open the door.

The fight, or defend, component is the last resort if the individual cannot run or hide. The video said individual should grab whatever they can and be prepared to fight the perpetrator in order to survive.

The video also said the police may not help injured individuals at first because their first priority is to apprehend the perpetrator.

The announcement said that the Office of Public Safety and Energy Management will have staff available to present emergency response training. The presentation provides a general overview of how to identify and report an emergency, and how to receive emergency notifications. The presentation also describes the steps to be taken during shelter-in-place and evacuation scenarios.

The college has provided an emergency readiness and response guide, which offers information on what to do in a number of circumstances, including hostage situations and bomb threats.

Kosinuk said that in addition to the information provided, it is important for the campus community to know that Public Safety officers are trained on emergency response and violent emergencies.

“Campus community members should feel confident in Public Safety’s ability to respond and support them if there’s violence on campus or other emergency situations,” Kosinuk said.

Kosinuk said he thinks these resources help the campus community prepare for the case of a violent attack on campus.

“We know that these kinds of situations are stressful just to think about and prepare for, much less experience,” he said. “That being the case, we try to focus the training on a few, easily remembered steps that are realistic for someone to implement in the moment of an emergency.