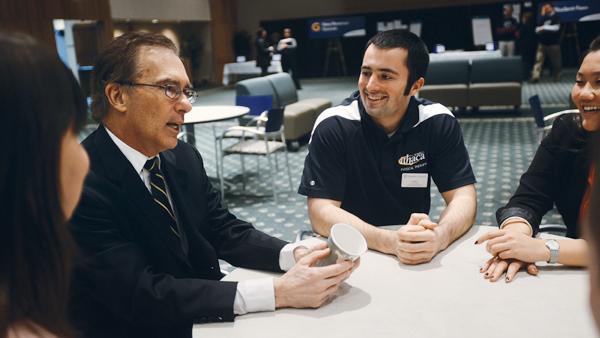 Physical therapy students drove from Rochester, N.Y., to Ithaca on Wednesday to voice their opposition to a recommendation by Huron Consulting Group to eliminate the Rochester Center, which many say is an integral part of the program.

One recommendation of Ithaca College’s Effectiveness and Affordability Review, under the theme of cost consciousness, is “consolidate Rochester Center operations.” Huron recommends that the college “evaluate the opportunity to consolidate current Rochester Center operations to the main campus in Ithaca,” and “the evaluation would need to consider space requirements in Ithaca and programmatic facility needs [the cadaver dissection lab].” The consolidation, according to Huron, could save the college about $600,000.

About 25 sixth-year physical therapy students carpooled from Rochester after their classes Wednesday to attend the open house about Huron’s Effectiveness and Affordability Review and give input about why the college should not consolidate the Rochester Center. The open house was held for the college community Wednesday to drop off comments at stations relating to the recommendation themes.

Concerns from students in the program include losing connections to hospitals and medical professionals in Rochester and losing opportunities for research, residency and accreditation.

Marissa Speno, a sixth-year physical therapy student currently studying in Rochester, said she was surprised to hear about the recommendation. She said the center is a key part of the physical therapy program because the location and facility has more to offer as a medical community than Ithaca.

Speno said the Rochester Center is important for physical therapy students’ education because of the diverse patient population and the types of conditions treated there.

“The Cayuga Medical Center is a small hospital, and it’s not equipped to deal with a lot of the more acute and serious conditions that we’re able to see in Rochester — for example, people with traumatic brain injury and strokes — so it’s definitely a big component of it,” Speno said.

President Tom Rochon, who was at the open house Wednesday, said the event was what he hoped it would be — a place for people to engage one another about the recommendations. During the open house, he sat down with the sixth-year physical therapy students.

“I did have a chance to sit down with two groups of students and listen to their experiences in Rochester,” Rochon said. “I learned a great deal from listening to them.”

At the Student Government Association meeting Monday, the center consolidation was a large topic of discussion.

Junior Colin Covitz, senator for the School of Health Sciences and Human Performance, said consolidating the program will hurt the major and the students in it.

“It’s a very good program,” Covitz said. “It gives the students a really good taste of what’s to come in the coming years, and phasing that program out would be a huge detriment to both the program and all the students in the program.”

Fifth-year physical therapy majors Tiffany Grube and Tyler Murray attended the meeting to share their opinions about relocating the program. Grube said the cadaver lab is something not offered at every school and is important for the program.

“The knowledge that you gain from that hands-on experience in the hospital is just above and beyond anything that I could imagine just learning in a textbook,” Grube said.

Speno said the Rochester Center and the strength of the physical therapy program was a large deciding factor for her and many students who decided to attend the college.

“A lot of my classmates and peers choose Ithaca because of the strength of the program and what Rochester in part has to offer,” Speno said. “So if that component of the program was consolidated, I know that if we were to make the decision over again whether or not to go to [Ithaca College], I think a lot of us would reconsider that decision.”

Students in the physical therapy program released a video on YouTube on Tuesday, where they discussed reasons why the college should keep the Rochester Center. As of Wednesday night, the video had more than 500 views.

Stephanie Allen, a sixth-year physical therapy student who was at the open house, said the college should consider more than finances when evaluating whether to consolidate the center.

“I know [the college is] looking at this as something they would be gaining financially, but they need to look at what they’re losing,” Allen said.

Speno said having the dual campus arrangement has elevated the level and quality of physical therapy students’ education.

“When we make the move to Rochester, we’re forced to up our game,” Speno said. “The expectations are raised, and even just moving to a new environment with different professors, new facility surrounded by a huge medical community — I think that that just facilitates so much professional growth.”

Shaina Ung, also a sixth-year physical therapy student, said being in Rochester gives students a more professional experience and a chance to communicate and learn about different health fields.

“It’s not just providing better education,” Ung said. “It’s different, but it just gives us a more professional feel and focus and gives us more exposure and opportunity out in the community.” Speno added, “I think you said it right when you said it’s different. It’s just different. It’s getting out of that undergraduate culture and moving into a more professional environment.”