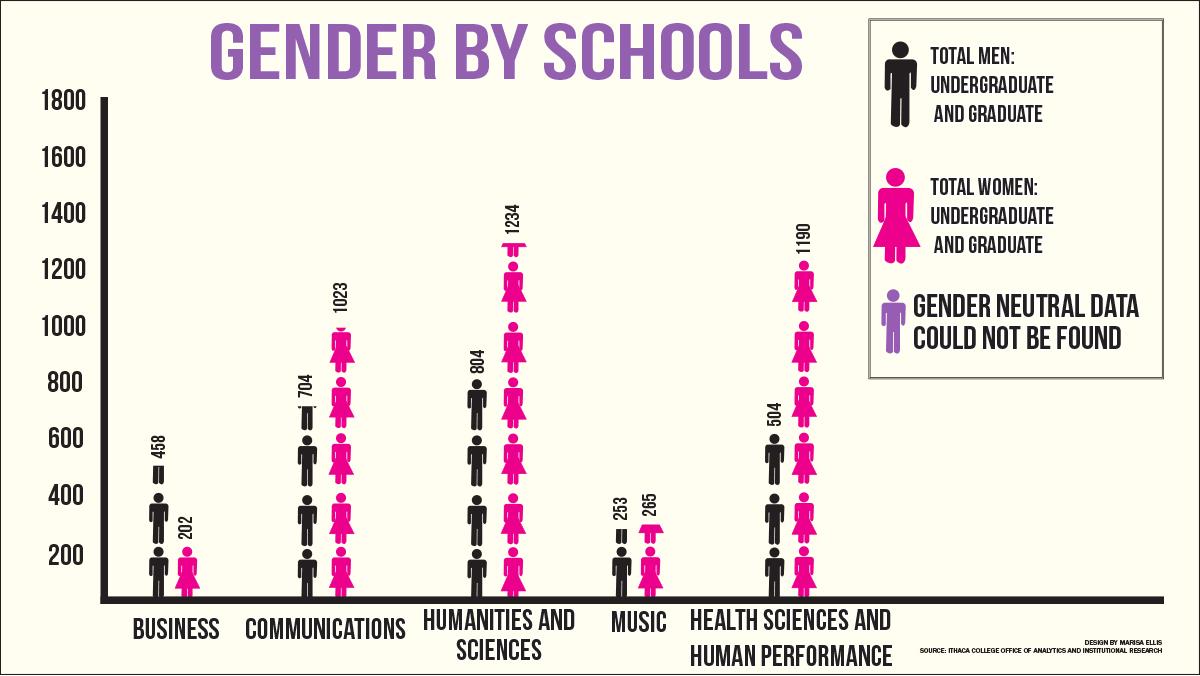 Students who identify as nonbinary at Ithaca College are left with limited options for having their gender identity recognized, as departments within the college can only classify students as male or female when recording enrollment data.

Claire Borch, associate director in the Office of Analytics and Institutional Research, said the college’s classification of students’ gender is dependent on the software that the administrative department within the college is using. For example, the Office of the Registrar uses the computer software Banner to keep track of the number of credits each student is taking, and though gender is not necessarily used to track this information, only binary gender options are available. Borch said the companies producing this software have not made more choices other than male and female available in their systems, so AIR is limited.

“Everyone needs to catch up,” Borch said. “We definitely need better ways of gathering information.”

Transgender and nonbinary students at the college already have the ability to change their preferred first name in some systems across campus, such as on class rosters and in the college’s directory, according to the transgender resources listed on the Center for LGBT Education, Outreach and Services website.

Up until this week, the process for students to officially change their gender on college records required students to present the registrar a legal document that had their new gender listed on it, such as a birth certificate or a license. However, this often requires a lengthy legal process with legal fees. Luca Maurer, director of the LGBT Center, said students can now change the gender designation on their campus records by filling out a form from the Office of the Registrar, but the form only lists binary genders. Students only have the option to change from female to male or male to female, as there is no “other” or “nonbinary” option.

Freshman August Miguez identifies as nonbinary, but all of their current records have their birth sex listed. Though they have considered changing their birth sex on legal documents, Miguez said they would rather leave it be for now.

“Until there’s another option for me, I don’t want to switch around,” Miguez said.

What is frustrating, they said, is that until there is a better option for them on legal documents, they have to settle for one gender marker or another.

Some administrative departments are restricted by the information the students are required to provide to the college through applications and other forms. Registrar Vikki Levine said the college registers students under the birth sex provided on the Common App. However, the Common App has recently updated its application so that students can now list their gender identity in an open text field. Unfortunately, though, there are not many ways for the college to concretely use this information.

Other colleges have questions on their application forms where individuals can indicate if they are transgender or a part of the LGBTQ community. The SUNY System’s applications has seperate multiple choice questions, where individuals can indicate their gender identity, including transgender and gender-fluid as options, and sexual orientation. Massachusetts Institute of Technology asks an optional question on its application, where applicants can identify their sexual orientation and gender identity, with transgender as an option. The question of whether students consider themselves a part of the lesbian, gay, bisexual, transgender and queer community is posed on Elon University’s application, according to Campus Pride.

Maurer said asking for a student’s sex at birth might not be a relevant question because at the college, student housing is not based on a student’s birth sex.

All colleges that receive some form of federal financial aid are required to report statistics on gender and race or ethnicity to the Institute of Educational Sciences, according to the Education Sciences Reform Act of 2002. Borch said that when the analytics office reports the college’s gender statistics to the government, the office only has binary gender options, since the federal government currently only recognizes male and female as legal genders.

Still, even this is changing, as Oregon and California have now recognized a third, nonbinary gender on legal documents. Miguez said the label of “other” might not be ideal but that it’s a step in the right direction for nonbinary people.

“Being an ‘other’ is definitely not that great, but I think I’d rather be recognized as something else than just being forced into one of those two boxes,” Miguez said. “At least with the other, it’s a start. … It opens the conversation.”