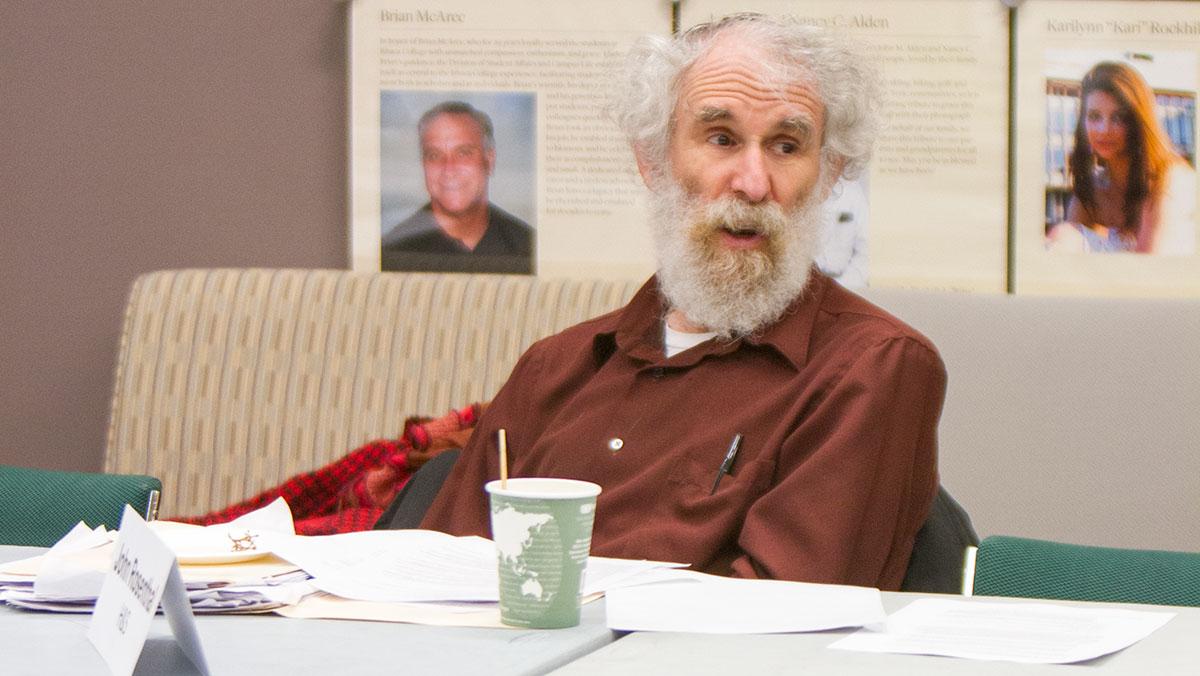 Anushka Rajbhandari/ The Ithacan
“Frankly, if I were a member of the [Ithaca College Board of Trustees,] I wouldn’t have voted for a budget with such vagueness,” John Rosenthall, executive committee member and professor of mathematics, said. “But they approved it.”
By Joe Byeon — Staff Writer
Published: March 18, 2015

The Ithaca College Faculty Council discussed potential negative impacts of next year’s school budget on the faculty and the administration’s rejection of the council’s suggestion to hire another full-time staff member for the Office of Counseling and Wellness at its meeting March 17.

John Rosenthal, executive committee member and professor of mathematics, outlined parts of the approved budget for the 2015–16 school year that could affect the faculty in a memo to the council. Rosenthal also serves on the Institutional Effectiveness and Budget Committee, along with Tom Swensen, chair of the exercise and sport sciences department.

In his memo, he noted that total funds for salaries and wages are decreasing from the 2014–15 to 2015–16 budgets. He said next year’s budget projects the college to cut approximately $3 million in salaries and compensation. One million dollars has already been cut through vacant positions, and another $2 million is projected through current, but unidentified, positions.

Gerald Hector, vice president of finance and administration, said the administration has yet to decide what areas of the college the $2 million will affect.

Rosenthal expressed his concerns for next year’s budget.

“Frankly, if I were a member of the [Ithaca College Board of Trustees,] I wouldn’t have voted for a budget with such vagueness,” he said. “But they approved it.”

Rosenthal also said while the salary pool is projected to decrease, there is an increase in the budget for the administration to hire professional services, or consultants. Previously, he said, these services were paid for with budget surpluses.

Hector said the budget for these services will increase, but partly because the zero-based budgeting initiative seeks to allocate dollars for all possible professional services the college might need.

“What we’re probably going to see is some areas where we thought certain things were needed maybe weren’t needed, and that’s what this whole exercise is about,” Hector said. “We have learned a tremendous amount of information about our budgeting practices, so going forward the process should be much much smoother.”

Peter Rothbart, council chair and professor of music theory, history and composition, said the Faculty Council is trying to better communicate with the administration about what the priorities of the council are.

“Budgeting is not the province of the faculty, but we can make suggestions because that’s part of shared governance,” Rothbart said.

The council also discussed the administration’s denial of the request the council made to grant the Office of Counseling and Wellness a new permanent position.

Deborah Harper, director of Office of Counseling and Wellness, asked during the December 2014 Faculty Council meeting for its support in obtaining additional resources for the office, which she said is struggling to meet the increased demands for its service.

Rothbart said the letter of request with the full backing of the council was rejected and he was given a pro forma response from the administration saying there were “varying priorities.”

He added that since the 2015–16 budget has been approved, the addition of a permanent position for the office is highly unlikely for next year but he will write a letter to the administration asking for an official reasoning of why the proposal was denied.

Deborah Rifkin, associate professor of music theory, said this issue is part of a bigger concern about when the Faculty Council can voice its opinion to the administration regarding budgetary issues.

“We often as a group talk about things that have budgetary implications, but we are stymied because of scheduling [of meetings,]” Rifkin said. “So even if we have a proposal, [the administration] is going to say, ‘The budget is set, the timing wasn’t right.’”