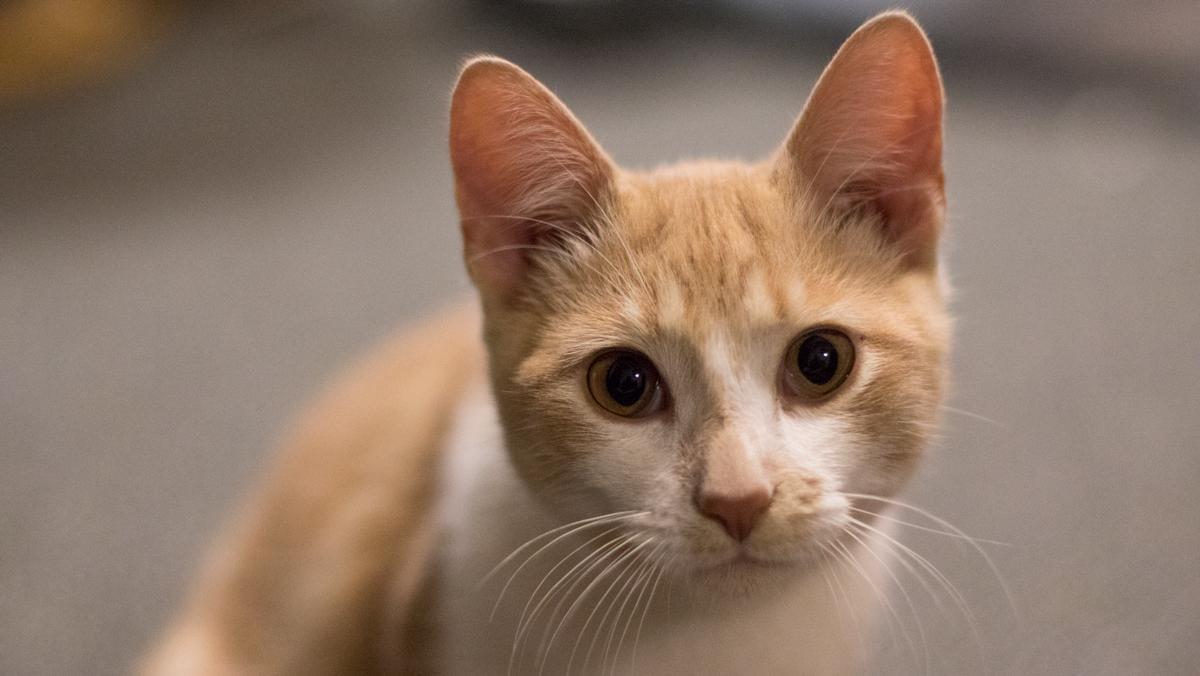 Ithaca College sophomore Eliot Willenborg has anxiety and depression. One night, while sitting in his dorm, overwhelmed by stress, he looked over at his emotional support pet cat, Ron,  sitting on a shelf in his room, trying to nibble on a bag of food. When Ron lost his footing, he somersaulted off the shelf — a ridiculous but adorable mistake that instantly improved Willenborg’s mood.

“That was so funny I just decided to put my work away and say, ‘Alright, I’m done for the day,” Willenborg said.

For Willenborg and other students, emotional support animals are becoming more popular companions to help with mental health symptoms. He is one of 31 students on campus who have brought emotional support pets to the college this year in order to combat anxiety, depression and other mental health issues. Support pets have been rising substantially on college campuses throughout the country and at the college since 2012.

Sophomore Grace Joyce said that without her on-campus support pet, Susie, who is a West Highland Terrier and Toy Poodle mix, living at the college would be a lot harder.

“When she looks at me, I just really don’t get as stressed,” Joyce said. “She just makes everything easier.”

During the 2012–13 academic year, four support pets were registered on campus. In 2013–14, the number grew to 15 service animals. The biggest leap came between the 2014–15 school year and 2016–17, when the number of service animals grew from 21 to 43. Bonnie Prunty, Director of Residential Life and Judicial Affairs, said more emotional support animals are expected to be registered in addition to the 31 already on campus for the 2017 academic year. 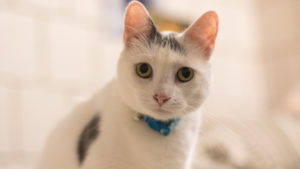 Sophomore Kelly Madden has an emotional support cat named Lovable to help her with symptoms of depression and anxiety. Connor Lange/The Ithacan

Deborah Harper, director of the Center for Counseling and Wellness, said via email that the increase of service animals is occurring because many professionals are beginning to suggest emotional support animals more often.

She said that while there is not scientific evidence that animals improve someone’s mental health, they can have other benefits depending on the personality of the person they are matched with. She said that in some cases, the added expense of animals can be more stressful. Therefore, CAPS does not officially recommend support animals to students, but counselors can let students know that they are an option.

“Emotional support animals have become very popular and are sometimes prescribed as one kind of accommodation for a disabling condition,” Harper said.

Junior Alisar Awwad, who lives on campus with her cat, Peanut, said she heard about emotional support animals through CAPS. As an international student, Awwad said, her cat Peanut helps her feel more at home on campus since she is so far away from her childhood home.

Willenborg said he too feels more at home on campus now that he has Ron with him. He said he grew up surrounded by animals, so having one on campus reminds him of that aspect of his home life. Willenborg said Ron helps him feel a sense of responsibility. He said that taking care of a pet helps him get out of bed in the morning to do what needs to be done.

“He made me more of a reliable person,” Willenborg said. 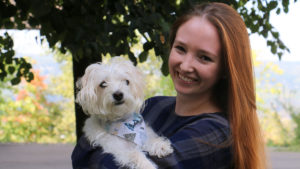 Junior Grace Joyce said that without her on-campus support pet, Susie, living at the college would be a lot harder. Julia Cherruault/The Ithacan

“Many health professionals recommend support animals for the therapeutic benefits they may be able to provide for their owners, alleviating symptoms of a disability,” Celeste-Astorina said.

Celeste-Astorina said the process is the same as applying for a housing accommodation, which is done by filling out a request form. The student must have written proof of a disability by a certified health professional to confirm the request, Celeste-Astorina said. That health provider must be familiar with the patient and recommend that this would be the best option for their health. Following that step, she said, the requests go to the SAS’s housing committee, which gives the final say on if the student is approved to have an animal on campus.

Sophomore Kelly Madden has an emotional support cat named Lovable to help her with symptoms of depression and anxiety. Madden said it took two weeks for Lovable, or Lo, as Madden has nicknamed her, to be registered. Madden said that she had to have Lo stay at her mother’s home when she was waiting to hear back from the housing committee and that it was very inconvenient.

“It is kind of a bit tedious,” said Madden. “I wish it was a little easier.”

Madden and her roommate rescued Loveable from a shelter in central New York for the purpose of having her as an emotional support animal for the two of them, and Madden said that she has seen a positive change in her life because Lovable makes her more calm.

Michael Masinter is a law professor at Nova Southeastern University who has studied laws relating to emotional support animals. Masinter said that students have the right to have a support animal on campus under the Fair Housing Act. Mental health issues are considered a disability, and the college has to be courteous to those who request animal assistance, he said.

Masinter said the benefit of these animals is that they can help alleviate pain that could result in, for example, a panic attack or cutting episode if the animal was not there. Therefore, their presence can help prevent serious symptoms.

However, the addition of support pets to college campuses, especially since their numbers are rising, can cause additional damage to dorms and apartments. He said that under the Fair Housing Act, a college cannot charge the student any additional costs for having an animal, but they can charge a student for any damage they make.

“You can make the handler, the student, responsible for damage beyond ordinary wear and tear that the service animal, or the emotional support animal, causes,” Masinter said.

As for Willenborg’s cat, Ron, adjusting to living in a closed space took some time. Now that Ron is adjusted, Willenborg said that he is doing well with the dorm lifestyle and has not damaged any property in the process of adjusting.

“He is just living his best life,” Willenborg said.

Willenborg said that if Ron did do damage, he would try to fix it himself before getting the campus involved so he could reduce the overall cost any damage could cause.

Awwad said that costs vary but, usually, monthly costs amount to around a hundred dollars to pay for things like Peanut’s food, litter, toys and vet appointments.

Joyce said the only expenses are registering the pet in the city of Ithaca and for necessities like food, Joyce said. She said that she does spend a good amount of time caring for her dog, taking Susie out at least three times a day, doing her homework in her room to be with her, and taking her to the dog park every weekend.

Despite the time commitment, Joyce said she wouldn’t have her life on campus any other way.

“I don’t know what I would do without her,” Joyce said. “She’s always there, and it really helps having her.”

Bridget Bright can be reached at bbright@ithaca.edu or via Twitter: @bridget_bright ‏