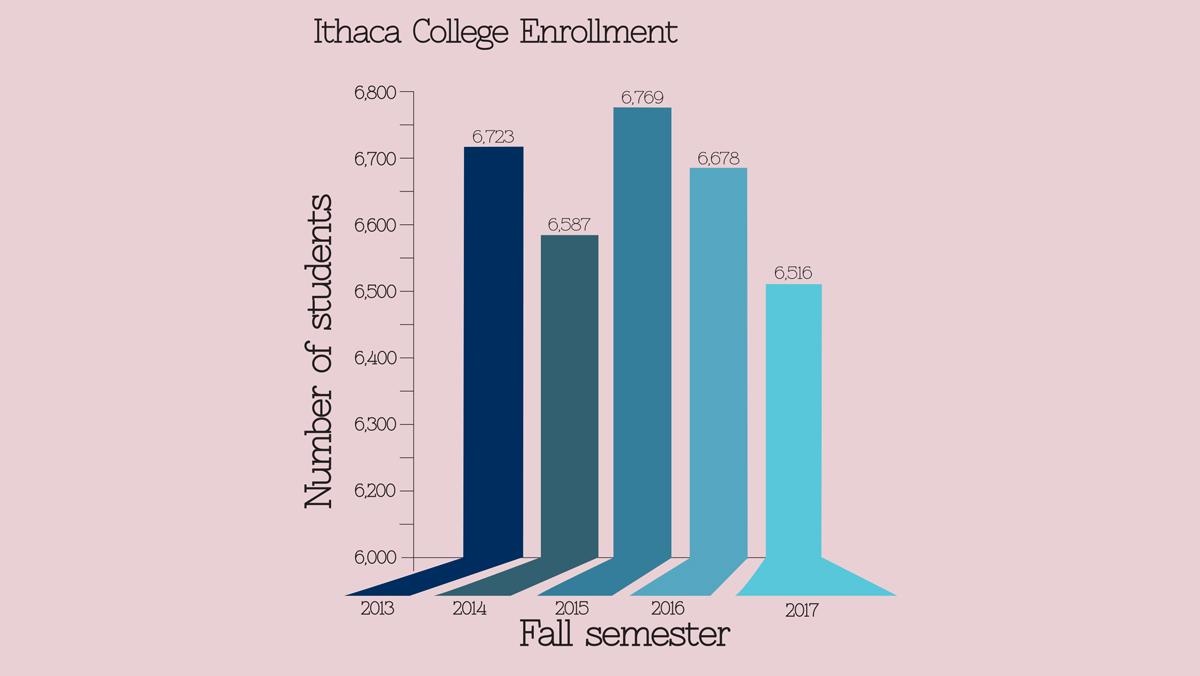 This fall, Ithaca College has its lowest overall enrollment since 2008. While there has been a small increase in African, Latino, Asian and Native American students at the college, there has been an overall loss 162 students since last year.

Enrollment for Fall 2017 totals 6,516 students. In Fall 2016, the total enrollment at the college totaled 6,678 students. That semester there were 1,357 ALANA students enrolled at the college.This semester, there are 1,379 ALANA students, or 21.2 percent of the student population.  This is a 1.1 percent increase from last year. 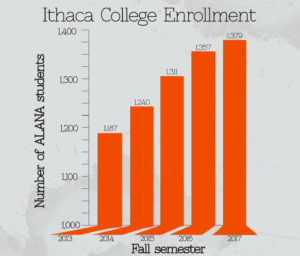 The college’s admissions process is race–neutral, meaning that an applicant’s race is known, should the applicant choose to disclose it, but not considered as a factor in deciding to admit the student. Instead, the college’s efforts to increase the diversity of new classes of students are based on recruitment strategies. The college takes into account the diversity of the schools and cities it chooses to visit, as previously reported by The Ithacan, in order to diversify its incoming freshman classes. In addition, the college has merit-based scholarships such as the Martin Luther King Scholar program and ALANA scholarships specifically for students from underrepresented backgrounds.

“What we have to do is make sure that we are prepared for the diversity of students who choose to come to Ithaca College,” Richardson said. “If we see a reverse in those numbers, then we’ll have different questions to ask ourselves.”

Gossa Tsegaye, assistant professor in the department of Media Arts, Sciences and Studies, said that any increase in ALANA students is a positive one, even though this semester’s increase is small. However, he said that he is more concerned about allowing students of color to make more connections to their pedagogy at the college rather than emphasizing connections between students who are of the same race.

Junior Dana Herbert also said the college should focus on increasing enrollment of each group represented under ALANA instead of grouping everyone together into one statistic. Herbert said the college’s low number of ALANA students could potentially discourage people of color from applying to the college or deciding to come after being accepted.

“Even though Ithaca supposedly has a range of diversity, it really doesn’t,” she said. “That could be a put–off for people even applying to this school, let alone accepting this school.”

Junior Julissa Martinez said it is important that the number of ALANA students at the college has increased every year, but that the overall number is still too low.

It is important that accepted ALANA students are aware they would be supported if they decided to attend the college, since the college is a predominately white institution, Martinez said. She also said that students of color who already attend the college also need to feel supported by the institution so they do not transfer or drop out. The college’s retention of students to their third semester is 82.7 percent, while the retention rates at some peer group schools, including Elon University, Fordham University, Marist College and Boston University, are in the 90 percent range.

“I think that because this is a predominately white institution, I think that it’s important to have people who look like you on this campus as well,” Martinez said. “As a student of color, I think it is pretty intimidating when you’re in some classes and you don’t see anyone that looks like you.”

Decreased enrollment in humanities affects IC and the nation