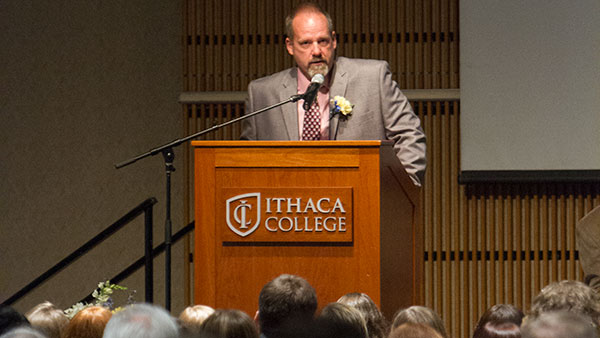 After a minimum of 195.5 credits, 2,200 hours of lectures and 1,800 hours of clinical affiliation, the last class of Ithaca College physical therapy students to study at the Rochester Center convened with their families for a closing ceremony on Aug. 17 in Emerson Suites.

Though all 82 sixth-year physical therapy graduates had the opportunity to walk at the Class of 2014 Commencement ceremony May 18, many decided not to because the graduation took place the day before they began their clinical internships, Carly McDonald, a class representative for the physical therapy Class of 2014 and one of the event’s organizers, said.

Elizabeth Previte, another class representative, said the graduates had seen two graduation ceremonies — earning their bachelor’s degrees in May 2012 and Doctorates of Physical Therapy in May 2014 — but it was not until this August that they had completed all degree requirements.

“That’s where the closing ceremony comes in as a true culmination of our DPT degrees, as we are done with all degree requirements, and it is celebrated only with the PT class and department,” she said.

Barbara Belyea, clinical professor and associate chair of the Department of Physical Therapy, and Stephen Lahr, associate professor and chair of the Department of Physical Therapy, called the graduates onto the stage one at a time, accompanied by a song of their choice and a projection of their baby photos. Each graduate received a gold boxes containing a list of the individual’s coursework as a reminder of all they had achieved.

In his closing speech, Chris McNamara, clinical assistant professor and clinic director for the Department of Physical Therapy, acknowledged what the graduates have done in a span of six years and said these skills have prepared them for any situation.

“You’ve observed, read, listened and studied,” McNamara said. “You’ve documented, dissected, palpated and presented. You’ve memorized, massaged, mobilized and manipulated. After all of that, you’ve learned to think on your feet.”

Physical therapy graduate Richard Mallon was selected to speak during the event on behalf of the 2014 graduating class. Previte said the Closing Ceremony Committee had asked the class to nominate a student to speak, and Mallon received the most votes. Addressing parents and professors, Mallon spoke to the value of the graduates’ newly earned degrees.

“It is not handed out — we work hard for it,” Mallon said. “We are ready to go out there, and you guys would not push us out there if we were not ready.”

After earning their degrees, the next step is to take the National Physical Therapy Examinations, administered by the Federation of State Boards of Physical Therapy, to earn licenses to practice physical therapy, McDonald said. She said she plans to study every day until she takes the examOct. 29.

John Winslow, assistant professor in the physical therapy department, was the keynote speaker at the ceremony and said both students and parents should be credited for reaching their goals.

“I’d like to congratulate the students for making it through one of the top physical therapy schools in the country,” Winslow said. “I’d also like to thank the parents for taking a second mortgage out on their house to pay for it.”

Winslow ended his speech by reminding the graduates that they will still be members of the college’s family.