The sounds of power tools and laughter echoed in the halls of the New Roots Charter School Jan. 30 as Ithaca College students worked together sanding tables.

At the same time, another group of students was among the bookcases and computers at the Tompkins County Public Library, wiping down the building’s equipment. They had one goal in mind: helping others. 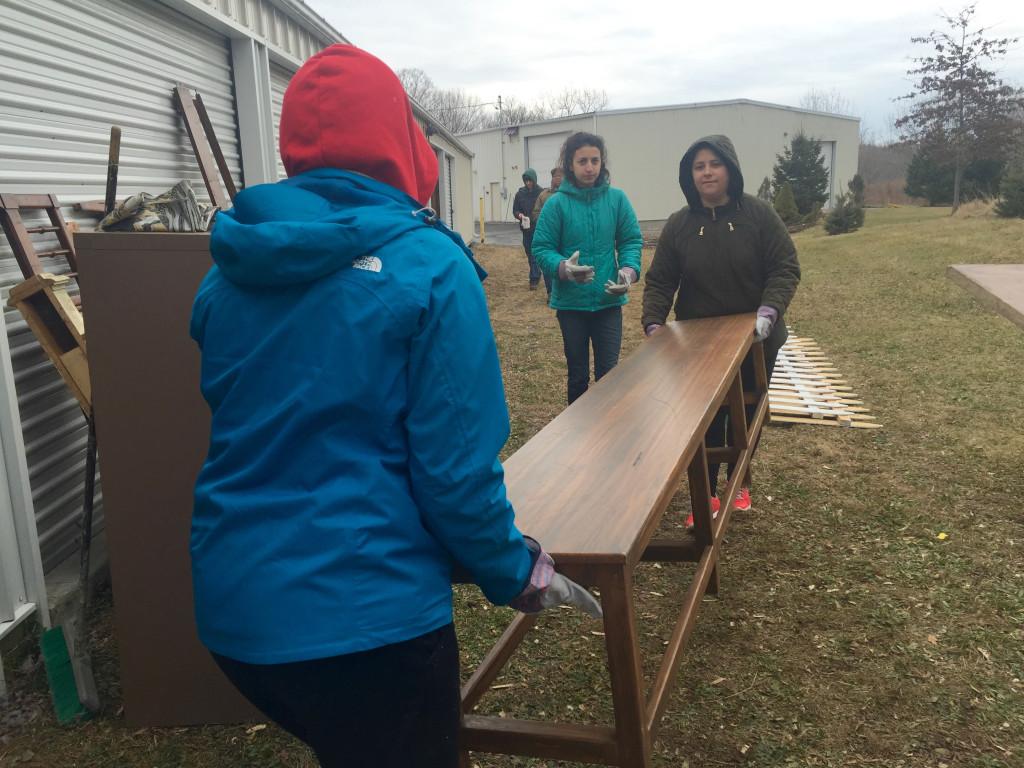 Some students, like sophomore Maureen Wietecha, found a personal connection in the volunteer projects. Wietecha, whose mother is a librarian, volunteered at the Tompkins County Public Library. Another volunteer at the library, junior Sabina Leybold, said she chose the project because of the importance of libraries.

“I think it’s especially important to work at libraries because they provide free resources for everyone. So if you are able to give back, you should,” she said.

Leybold said along with helping out her own community, she appreciated being able to honor Martin Luther King Jr.’s principles.

“His big thing was nonviolence, peace, working with people,” Leybold said. “What we’re doing obviously is nonviolent, is giving back to the community and kind of supporting the things that give us equity.”

Austin said each year he sees students return multiple times to the organization they volunteered for on the MLK Day of Service. 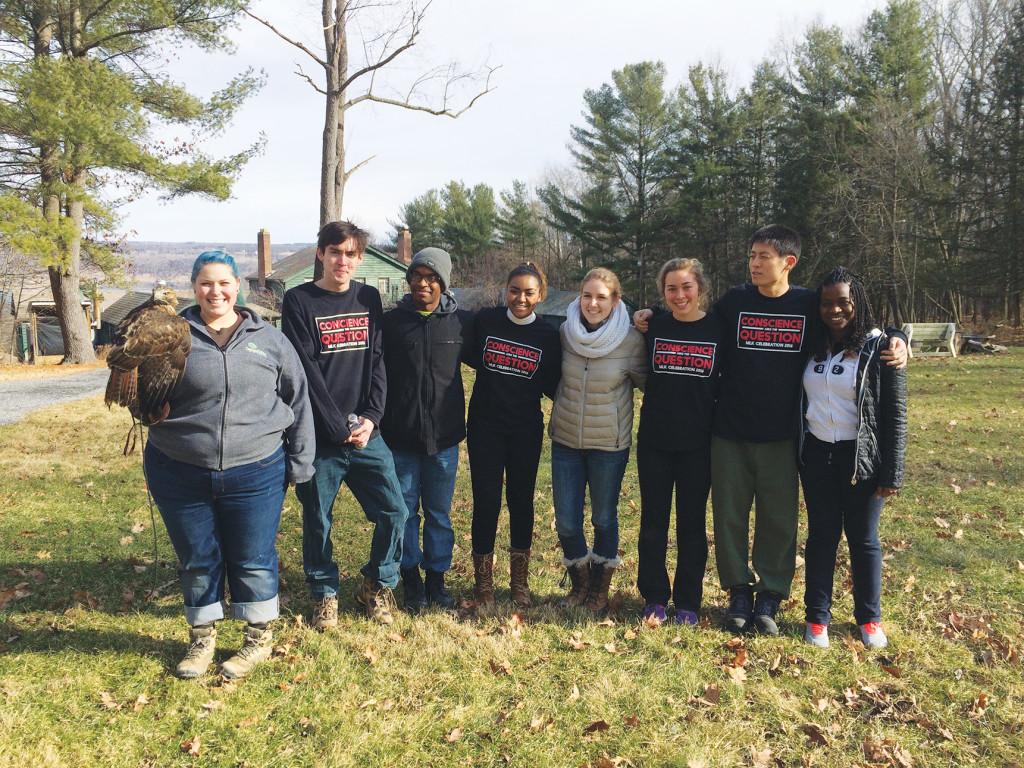 Ithaca College student volunteers stand outside with a staff member at Cayuga Nature Center. The Office of Student Engagement and Multicultural Affairs organized the MLK Day of Service Jan. 30 to encourage volunteerism. Cayuga Nature Center was one of seven partner organizations with the college for the event. Courtesy of Julia Imbalzano

After a day of service, the students gathered in Emerson Suites for a reflection on their experiences. The discussion was led by alumnus Todd Bernstein ’79, founder of the Greater Philadelphia Martin Luther King Day of Service and King365, a program that encourages citizens to continue volunteering throughout the year. Austin completed the day by presenting the MLK NOW Award to 10 students who were nominated for their excellent effort during the day.

Bernstein said he created the MLK Day of Service in Philadelphia in 1996. He said he was proud to be at his alma mater 20 years later witnessing the students participating in a movement he started. He said he was especially pleased that the day is coming amid a time of change on the college’s campus.

“I think there’s a correlation between the efforts of Dr. King to rally broad coalitions, to seek change, and the tireless struggle of POC at IC,” Bernstein said. “From the conversations that I’ve had, it’s only a step in a marathon.”

After months of protests and discussions on the college’s campus about equality and justice, many said they feel this year’s MLK Day of Service has a stronger power than past years’. Junior Sarah Logsdon said although she was abroad fall semester, she was still able to keep up with the events and appreciate the impact they have on this day of service.

“It makes it more meaningful,” she said. “It’s not just a historical day. It’s so ever-present, and it’s just growing.”

Others, like Wietecha, said there isn’t a direct connection, but both causes are working toward a similar goal.

“It’s not an act of defiance or anything like a lot of the stuff last semester, but it is kind of, in solidarity, another action to contribute to the whole movement,” she said.

Sophomore Clara O’Connor said the people who would typically volunteer would volunteer no matter what is happening on campus.

“Maybe it made people want to be more involved with things that are happening in their community, but otherwise I think people that want to do service and want to support the small organizations that need help, I don’t think that changes,” she said.

Bernstein said this one day of service is just a small part of continuing Martin Luther King Jr.’s legacy.

“Dr. King was a champion of action, not apathy, not one day, but 365 days of the year,” Bernstein said. “It’s important that we use a day of volunteering and turn it into a lifetime of serving others. That’s how you create change.”

Logsdon said she enjoys having a day, among a year of volunteering opportunities, to come together with other students and focus on organizations in the community that need help.

“There’s other volunteer projects at Ithaca College, but this is the main day people come together in groups that they don’t know each other, they get up at 8 a.m., and they really take a day to not care about themselves as much and just take a day to help the community,” Logsdon said. “That’s just the most important part of MLK’s message.”