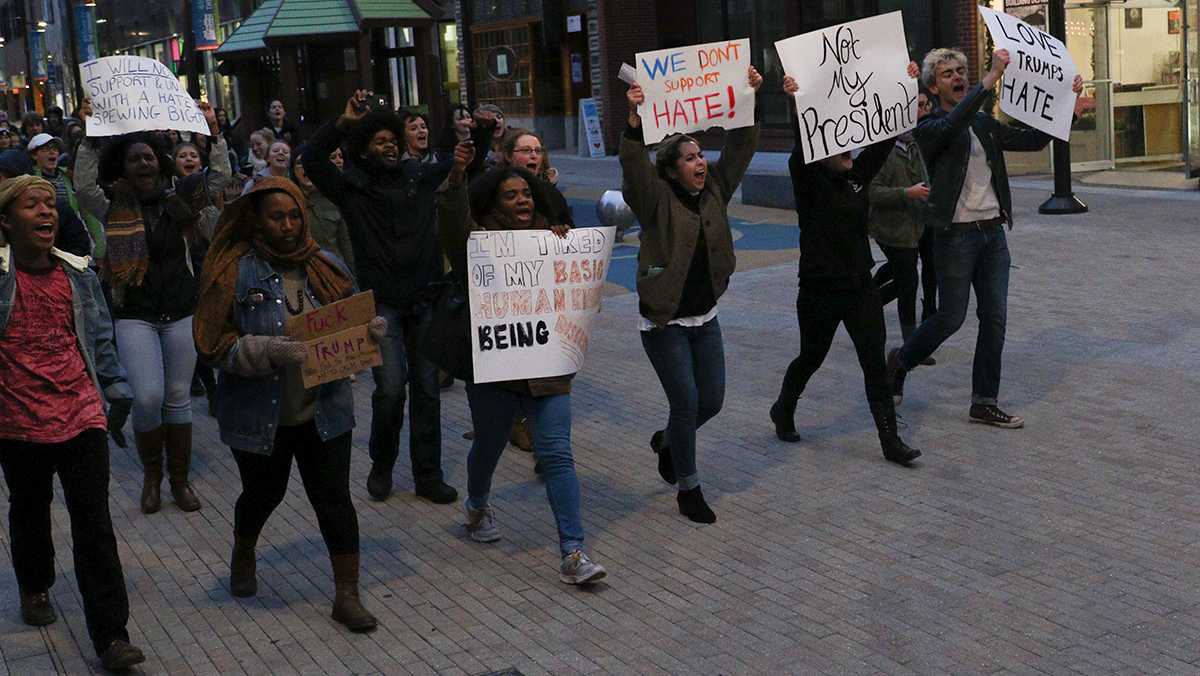 Days after Donald Trump was elected president, over 70 Ithaca College students banded together to voice their concerns through a “Love Trumps Hate” demonstration Nov. 11 down South Hill.

“Show me what an American looks like,” “My body, my choice,” and “Racist, sexist, anti-gay, ignorance must go away,” were some of the phrases participants chanted as they walked from Emerson Hall, down Hudson Street and toward The Commons in downtown Ithaca. Students held up anti-hate–themed signs, and some showed their support by honking as they drove by the group. Conversely, one person, riding in a red pickup truck, flipped off the students.

The student demonstration is one of many that have sprung up on college campuses around the country, including the University of California at Berkeley, Texas State University and the University of Minnesota. The contentious 2016 presidential election has also spurred public protests in many cities.

Sophomore event organizers Talia Weindling and Chloé Ziff said they were both disheartened after finding out Trump won the presidency. Weindling said that after hearing the news, she immediately began questioning how her life was going to change and how the lives of others would be affected. She decided to assemble the rally not just as an act against Trump but as an act against hate, she said. She also formed the event to show support for those who are the most affected by the hate surrounding the election.

“It’s important to me because there is something that I was born with in this world that other people weren’t, and I admit it: It’s my privilege,” Weindling said. “If I’m given this privilege, I want to help people that don’t have the privilege to help themselves.”

Ziff said that when Weindling asked her to co-organize the event, she accepted right away. She said having this rally is a steppingstone toward starting a dialogue.

Before the peaceful protest, students crafted signs that read, “We Don’t Support Hate,” “Don’t Antagonize — Organize,” “When Hate Becomes Law, Resistance Becomes Duty” and several other phrases. After writing his “Love Trumps Hate” sign, sophomore Shane Reynolds discussed how his coming from a white conservative Roman Catholic family prompted him to attend the rally and demonstrate his personal beliefs as a member of the LGBT community. Reynolds said he is not just representing himself in voicing his stance against Trump, but any victim of intolerance.

“It’s not just about me,” he said. “It’s about my friends that are Muslim, friends of color, friends in the LGBT community, disabled friends, that my heart breaks for and that I’m scared for.”

Freshman Usman Ishaq said he is concerned by a Trump presidency, and he said he thinks it is important to take action against his policies.

“I want to support the cause that we as a generation are the future and will be the ones that change America as a whole,” Ishaq said. “I won’t be put into terror to the point that I’m silent.”

Once students congregated on The Commons, they circled each other, opened up the space and offered the megaphone to whoever wanted to vocalize their thoughts on how this election is personally affecting them and the community. Freshman Leah Byck said everyone deserves basic human rights and that it is up to the rising generation to make a change.

“I think we all just came here to stand together and share a voice,” Byck said. “It’s important to share that there are still people out there who want to make a difference.”