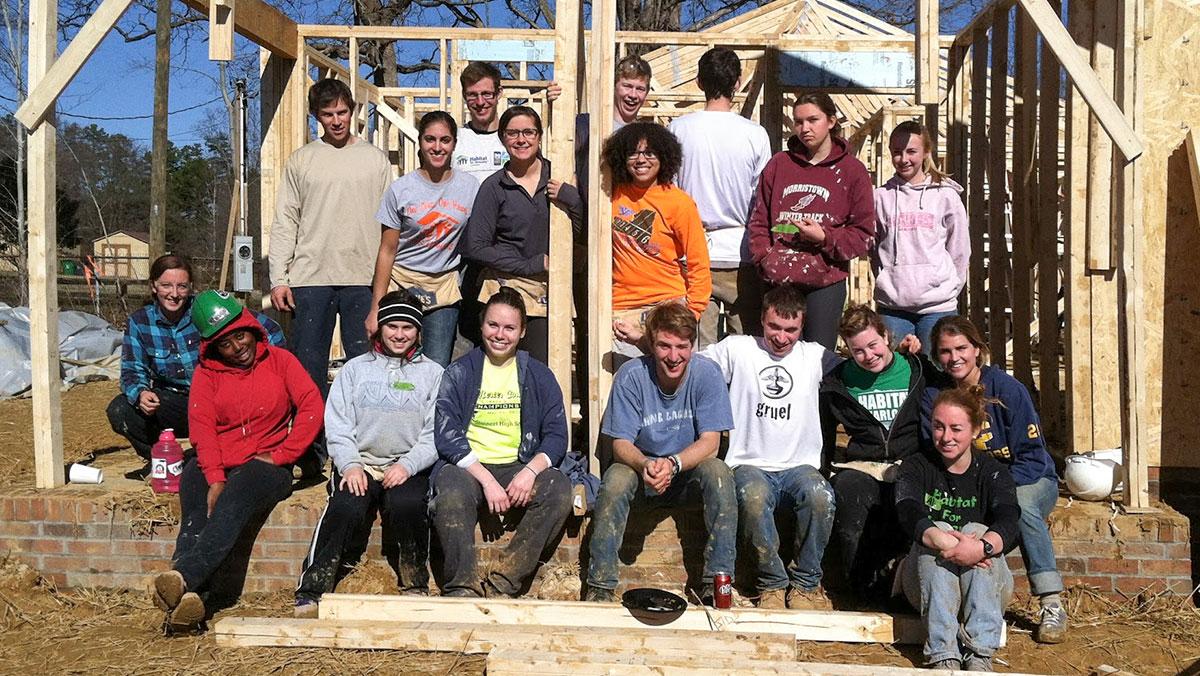 Before returning to the Ithaca winter, students from Ithaca College’s Habitat for Humanity club and the Park Scholar program spent their final week of break in much warmer locations helping to provide housing for those in need.

The two groups spent the final week of winter break volunteering in two southern cities. Fourteen members of IC Habitat for Humanity did construction work on houses in Charlotte, North Carolina, while 16 Park Scholar seniors participated in building houses in a segment of New Orleans still recovering from the devastation wrought by Hurricane Katrina nearly 10 years ago.

Senior Park Scholar Zachary Briggs said he was shocked by how much the city is still recovering from the hurricane.

“To actually be there, it really hits you how devastating it was for the whole community and individual people,” he said.

Briggs said the Park Scholars spent most of their time working in the Lower Ninth Ward, a section of New Orleans that was particularly impacted by Katrina. Comparable to Habitat for Humanity, the group aided in the construction of three different houses during their time in the city, Briggs said. He said the Park Scholar group worked Monday through Friday, getting up at 7 a.m. and returning to where they were staying at around 5 p.m.

“We weren’t expecting to be as exhausted as we were,” Briggs said. “It was a good feeling of exhaustion,” he added.

“It just blows your mind away,” Briggs said. “There’s literally no way you can imagine that amount of water in a space you’re in.”

Briggs said he understands why the Park Scholar senior service trip continues to return to the city, as sections of it were completely dismantled by Katrina.

“What was really kind of eerie was … we passed a bunch of open properties with no houses, just kind of flat with grass … and we just thought we were looking at properties for sale, but our volunteer coordinator said on all of those properties there were once houses,” Briggs said.

Also providing relief in the south was the college’s Habitat for Humanity club, which traveled to Charlotte, North Carolina. Junior Siobhan Stack, one of the trip leaders, said the group of students worked on three different houses. She said IC Habitat for Humanity does service trips every year during winter and spring break.

Sophomore Brendan Davis said the first project the group worked on was refurbishing a house, during which the group painted the entire inside of the house. The second site involved putting up all of a house’s walls, a process Davis said was satisfying to complete.

“It was really cool to see because it started out as a cement slate with no structure at all,” Davis said. “And when we left that day the entire first floor, all the walls, were up.”

Davis said the houses the group was building with Habitat for Humanity, and all houses built by the organization, are not just for anyone.

“There are a few requirements for prospective homeowners in Habitat,” he said. “One is you have to have a certain level of income … it’s not for people who have no income at all. It’s for people who have enough income to pay a mortgage, but the mortgage is interest free.” He added that the people for whom the home is being built are required to put in 300 total hours of volunteer work for Habitat for Humanity.

Originally, Stack said, IC Habitat for Humanity planned to have two service trips over the break — one to Charlotte and one to South Carolina — but cancelled the proposed trip to South Carolina due to lack of sufficient interest from students.

Stack said in past years there has usually been more interest in the winter break service trip.

“I don’t really know why,” Stack said. “We use the same advertising for it every year. For some reason there was just a drop in numbers.”

But the reduced numbers may have had a silver lining. Davis said one of the aspects that made the trip special was that most of the participants didn’t know each other before the trip but ended up becoming good friends by the end.

“One of the best parts about the trip is coming back to Ithaca and meeting each other on campus, seeing familiar faces and remembering all the good times and good work we did,” he said.

This article has been updated to reflect the following change: The original article reported that the Park Scholar group worked with Habitat for Humanity in New Orleans. The group did not work with this organization, but their work was comparable to that of Habitat for Humanity.