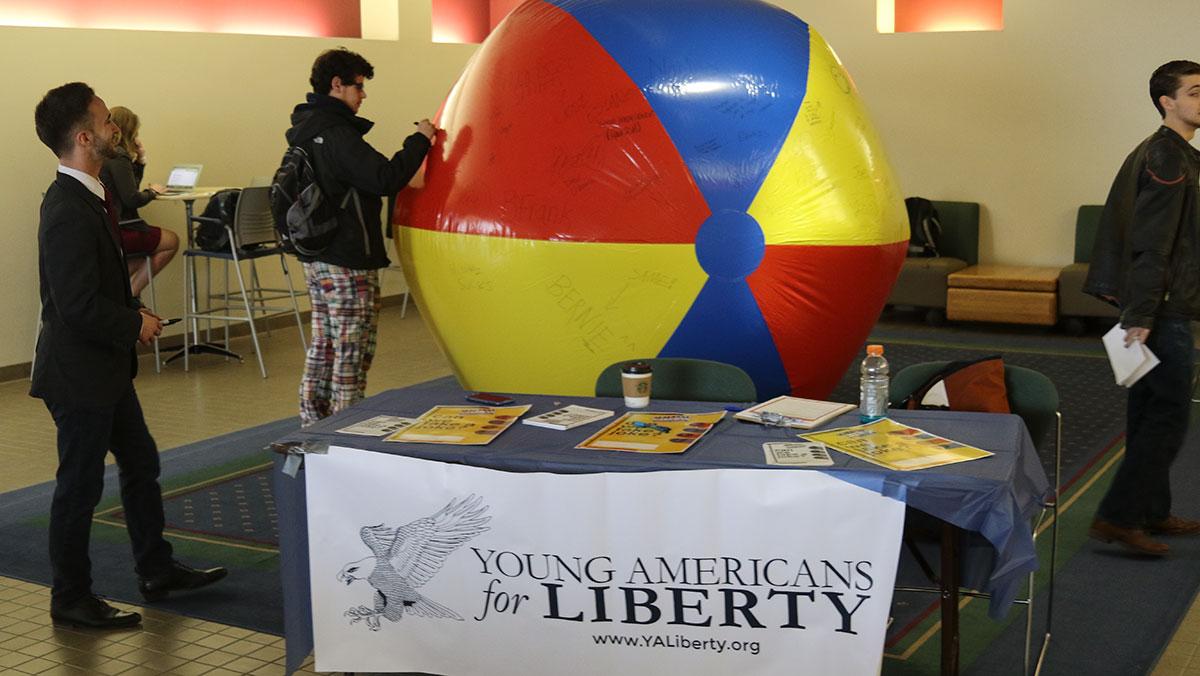 Jonah Swiatek/The Ithacan
Students write messages in Sharpie across a giant beach ball inside the Campus Center on April 11. The beach ball was a part of Freedom Week, an event put on by IC Young Americans for Liberty to advocate for free speech.
By Jonah Swiatek — Staff Writer
Published: April 19, 2016

“Make tuition free.” “Bernie 2k16.” “I’m late for class to write on a ball.” These are a few of the many messages scrawled in Sharpie across a giant beach ball inside the Campus Center on April 11. The purpose of the ball was to bring awareness to free speech at Ithaca College.

The “Fight for Free Speech Activism” is a national Young Americans for Liberty initiative that encouraged college chapters to set up a “free speech ball” for students to write on and to screen the documentary “Can We Take a Joke?” Senior Sean Themea, president of Ithaca College Young Americans for Liberty, said the club organized Freedom Week as an extension of the national organization.

Themea said he felt certain aspects of the Fall 2015 protests by POC at IC posed a threat to freedom of speech for students of color.

“You hear narratives of people of color who are being told they’re not black enough because they’re not 100 percent down with the POC at IC protests … and the idea that if you’re not with a movement, that you’re against the movement and that your speech should be censored,” Themea said.

Themea said President Tom Rochon’s pulling articles about Palestinian activism from IC View in 2008 and a restrictive student media policy proposed by the administration in 2012 were additional examples of how the college has sacrificed free speech in the past.

“The campus culture with the transition of the new president and the campus protests last semester … could manifest as a solution like a bias-reporting system or more stringent speech codes,” Themea said.  “We don’t think that is a solution. That is only going to suppress problems.”

ICYAL hosted a screening of the documentary “Can We Take a Joke?” on April 13. The film, which features prominent comedians such as Gilbert Gottfried, Penn Jillette and Lisa Lampanelli, focuses on free speech by examining the historical censorship of professional and student comedians. The film does not advocate for hate speech, profanity or obscenity but instead argues that the best way to tackle such issues is through an open exchange of ideas and the ensuing discussion that occurs when people are offended.

Two student comedians and Karith Foster, a professional comedian featured in the documentary, performed comedy routines before the screening. After the film, a Q&A session was opened, and Foster spoke to an audience of about 25 people.

Foster described the role comedy played in her personal development as an African-American growing up in the mostly white suburb of Plano, Texas, and its importance for society at large.

“Comedy has been used for centuries to … criticize the powers that be,” Foster said. “I think it’s an incredibly powerful tool for educating people, for making people think, and for making social change.”

Foster said she opposes the idea of safe spaces at colleges. Safe spaces are an approach to solving inclusivity issues on college campuses, providing a place for underrepresented students to take refuge from potentially hurtful comments. Following nationwide protests about the campus climate at colleges, safe spaces were implemented at some schools, including American University, West Virginia University and Oberlin College.

“I think what would be more beneficial is having coffee talks … a space where people are allowed to … say what they’d like to say, and other people have to actually listen. I don’t think we’re making progress by dividing ourselves up more,” Foster said.

Freshman Morgan Gjoen attended the event to receive extra credit for a class.

“I thought from the title … it was going to be a lot more offensive than it was,” Gjoen said. “I believe in free speech wholeheartedly. … I wish more people would see it.”

Sophomore Molly Robbins said she felt ICYAL inappropriately used signs that read, “trigger warning,” “explicit content” and “contains microaggressions” to advertise the event. She thought the posters, provided by the national chapter of YAL, made an unnecessary joke about a serious issue in the mental health community. Robbins also disagreed with some of the opinions presented in the film and afterward discussed her concerns with Foster and Themea.

“As a mental health advocate on this campus, I was concerned about their advertising,” Robbins said. “There’s a lot of debate within the mental health community about trigger warnings, but I don’t think they were doing that from a good angle. It was an angle of humor that I just didn’t appreciate.”

“The use of a trigger warning on the poster served two functions: to both market the film’s irreverent humor and start dialogue about the use of trigger warnings in higher education,” Themea said.

“These principles explicitly say the college supports a spirit of inquiry and dialogue, and we will not censor speech or deem speech offensive enough to be censored,” Themea said.

A previous version of this article misattributed a quote given by Molly Robbins to Karith Foster. This has been corrected.