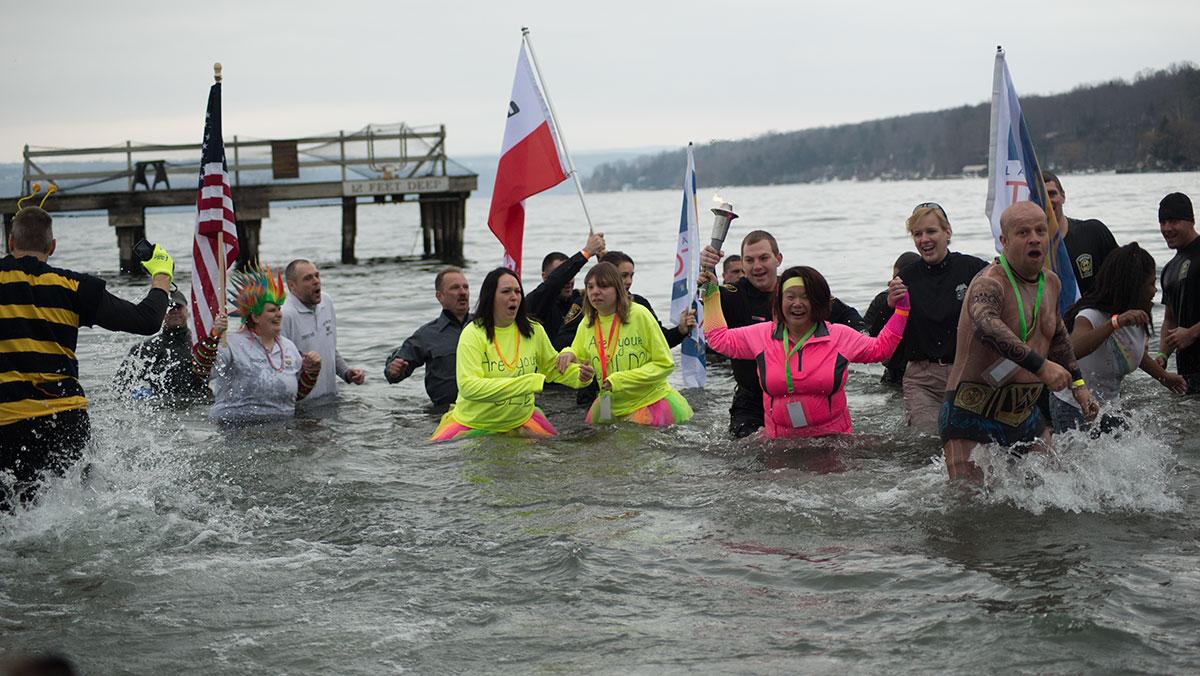 Several hundred people gathered at the shore of Cayuga Lake at Taughannock Falls State Park on March 21, wearing silly hats and costumes, some with their bare arms and legs exposed to the chilly 30-degree air. They waited, shifting their weight from foot to foot, for the signal to run down the shore and take the Polar Plunge.

Participants in Polar Plunges around the country jump into bodies of water in their communities at the tail end of winter to show their support for Special Olympics. This is Ithaca’s second-annual Polar Plunge fundraising event benefiting local Special Olympics athletes, using the slogan “Freezin’ for a Reason.” Individuals and teams raised funds to participate, and this year the event brought in about $34,000, according to the event website.

Kevin Doubleday, a member of Ithaca College Student Volunteers for Special Olympics, said this year’s event was more successful in terms of attendance and fundraising than last year, which brought in about $23,600. He also said with on-site donations, the total raised this year exceeded $38,000, which is not currently reflected on the event’s website.

Doubleday said the act of jumping into a freezing lake shows people are willing to do crazy things for a good cause. According to a Cornell University research program, the lake water was about 30 F at the time of the plunge.

“If you are are going to jump in a freezing lake dressed all silly with your friends, you might as well be raising over 38K for an amazing cause,” he said.

Students made up a large part of the crowd, including those from Ithaca College, Cornell University and Elmira College.

Freshman Julia Glassman said she was involved with Special Olympics in high school, and she joined IC Student Volunteers for Special Olympics once she came to the college. She said her heavy involvement with community-service clubs helped her find friends in her first year at college.

“[Community service] is getting me immediately involved [with] things in Ithaca or on campus,” she said. “I feel like everyone in someway should give back.”

Senior Joshua Perez was a member of team “ICe,” which raised over $1,000, according to the event’s website. Perez said he had never done a Polar Plunge event before, but his friends talked him into it.

“They were like, ‘Do you want to jump in the water for Special Olympics?’ and I was like, ‘yeah, I’m crazy enough for that,’” Perez said before the plunge. “I’m actually excited to do it.”

Perez said even though supporting the Special Olympics wasn’t necessarily his cause, he said it’s important to support all causes. Perez’s team wore matching grass skirts, leis and coconut bras.

About 40 student-athletes from the college also made a presence at the event, uniting under a single team, “Ithaca College Student Athlete Advisory Committee.” Sophomore Siobhan Sorensen, chair of the community service committee for SAAC and member of the volleyball team, said participating sports teams included volleyball, women’s soccer, football, golf, swimming and diving, track, gymnastics and field hockey. The athletes raised $640, according to the event’s website.

Sophomore Cassie Papaleo, a member of the swimming and diving team, said she had heard of Polar Plunges before, but this was the first one she was participating in.

“I think the atmosphere of an event like this is very positive,” Papaleo said. “It’s a community event, and that makes it different.”

While participants waited on the shore for registration to finish, music played and some joined in on a Zumba class. After registration finished, a pair of scuba divers launched out into the water to help ensure the safety of participants, and an ambulance waited on hand in a nearby parking lot. Participants gathered in an area on the shore marked with caution tape and waited for the signal. The first group to go in was led by Ithaca Special Olympics athlete Tae Hemsath, who was accompanied by about 20 members of local law enforcement. Hemsath carried an Olympic torch into the water.

After the initial group went in, everyone else was released from the shore. As several hundred people raced into the water, screams and laughter filled the air. Participants scrambled back out of the water as quickly as they could, racing back up the shore to their towels, blankets and dry clothes. Members of the swimming and diving team sported their college swimsuits into the water.

After many hours of building anticipation on the shore, the actual plunge lasted just a few minutes.

Afterward, Perez, standing barefoot and shivering as he dried off, his skin flushed red, laughed and said the plunge had been worth it, and he would definitely do it again.