Ithaca College students tell their stories: “We all felt each other’s pain” 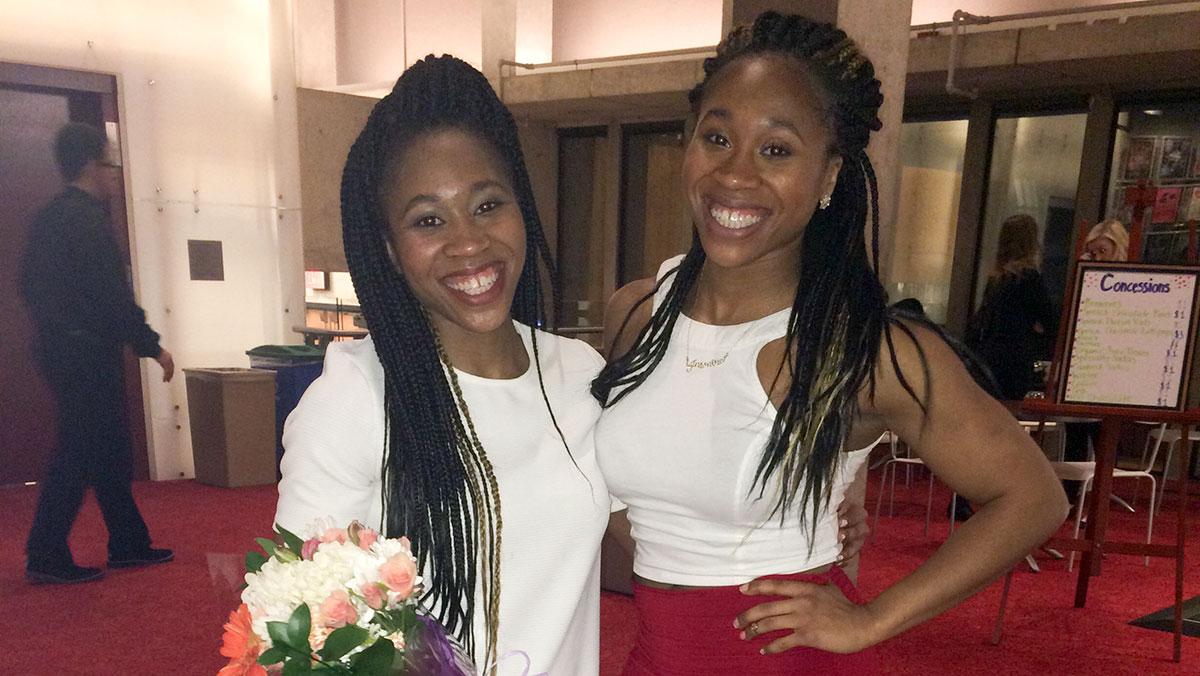 Editor’s Note: What follows is the second in a series of accounts of the experiences of Ithaca College students’ encounters with Public Safety Officers.

On Oct. 26, 2013, between 12:30 a.m. and 1 a.m., Ithaca College students Jasmine and Jennifer Spearman got into a physical altercation with two Public Safety officers after the officers entered their Circle Apartment to investigate a noise complaint.

Jasmine said she was pushed up against a wall in the apartment and handcuffed and said her sister was shoved onto one of the apartment’s couches, where Master Patrol Officer Brad Bates proceeded to kneel on her back and handcuff her. Jennifer’s lip was split open in the altercation.

They were written up, and Jennifer was ticketed for disorderly conduct. After bringing the incident to Judicial Affairs, Jasmine said the charges — the noise complaint write-up and the disorderly conduct ticket — were dropped. 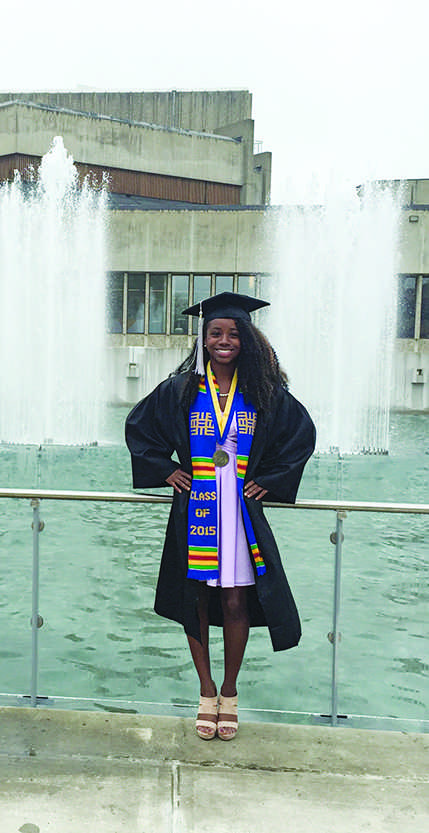 On Oct. 26, 2013, roommates Monifa Brooks ’15, Sawu Johnston ’14, and  current seniors Jasmine Spearman and Jennifer Spearman had a group of people over to their Circle Apartment for a party. Music was playing, and people were dancing.

Somewhere between 12:30 a.m. and 1 a.m., Brooks said, a Public Safety officer entered the apartment uninvited through the back screen door along with two members of the Student Auxiliary Safety Patrol. Brooks said she did not believe entering their home without consent was allowed. According to the Ithaca College Residential Agreement, the college “has the right to enter the apartments and rooms to respond to emergencies, provide repairs or maintenance and/or enforce college policies.”

Spearman and Johnston said the officer later claimed he had entered the apartment because he smelled marijuana, but both of them said there was none.

The beam of the officer’s flashlight combed the living room as students rushed to leave through the front door of the apartment, Brooks said. About five to 10 students who did not live at the residence did not make it out in time and stayed in the living room as Brooks and her roommates — all young, black women — were told to sit on one of the couches.

“I turn on the lights, we’re all sitting down — there’s a couple people in our house who weren’t really a part of it, but they also sat down,” Brooks said. “And we’re waiting for them to take our names and take our ID numbers and tell us what we’re getting written up for.”

Then the officer said he was calling in more officers.

“Before he could do any of that, he said, ‘I’m outnumbered. I’m calling for backup,’” Brooks said. “Mind you, we’re all maybe — no one’s taller than maybe 5’6” at the most, and we’re all petite girls. Everyone is sitting down. Everybody’s complying to what is asked of us.”

Johnston expressed similar feelings, noting the size advantage the officer had on them.

While Brooks said in total there was an estimate of about 15 people in the living room, the officer was primarily speaking to her and her roommates. Regardless, she said she didn’t understand why someone would need backup to write up noise complaint violations.

“It made absolutely no sense to us,” Brooks said.

Spearman said it only took a few moments for two other officers to arrive. Both Brooks and Spearman said this was when the situation escalated.

“We went to the door and said, ‘We don’t consent to letting these people into our house, so tell us what we’re getting written up for, take our names and leave,’” Brooks said. “Those are the procedures that they do. I’ve been to many parties where they say ‘Everybody leave,’ and then the owners are there, they write them up, do whatever and they leave peacefully.”

Johnston said other than feeling that they had a right to withhold consent from the entry, gender also played a part in their apprehension to letting in more officers.

“You have to think about the situation,” Johnston said. “We’re all girls, we’re all dressed in skirts and stuff like that, and we didn’t feel comfortable with that many big guys … we just thought that that was kind of odd that so many men need to be in the house when honestly there were about four of us sitting on the couch waiting to be written up.”

Brooks, Spearman and Johnston said two additional officers shoved the door open, and this is when Spearman said the force of the door pushed her into the wall adjacent to the apartment door, and she was immediately handcuffed by an officer. Spearman said they were aggressively interrogated about underaged drinking and their music volume.

“One of them was talking to Jennifer, and he told her to turn around, and I think the only thing was that they were refusing,” Johnston said. “[The officers] made it seem like what they said was law and that we had to listen to them, and it was just, they thought it was unfair, and that’s when one of the cops pushed down Jennifer into the couch and busted her lip.”

Jennifer Spearman was not able to be reached for comment.

Brooks said she was not handcuffed but said she was very afraid of what was happening and what might happen to her. Spearman described it as “chaotic” as the women continued to try to argue their rights to the officers.

“I was put in handcuffs, and my sister was shoved headfirst into a couch where the officer busted her lip and then, for some reason, wanted to charge her a ticket for disorderly conduct,” Spearman said.

Brooks said she didn’t remember Spearman’s sister saying anything to the officer to prompt such a response, other than asking him to get off of her: “‘I’m already in handcuffs. I can’t do anything. I can’t move.’”

The situation de-escalated almost as quickly as it erupted. Spearman said the officers asked them a number of questions, like who they had over and if there had been smoking or drinking. They wrote the women up with two Judicial Affairs referrals for criminal conduct, failure to comply and harassment and left. Spearman said her sister was taken outside, seated in the back of a patrol car and ticketed for disorderly conduct before being uncuffed.

Terri Stewart, director of the Office of Public Safety and Emergency Management, failed to respond to numerous attempts to contact her for comment.

The official entry to the college’s Public Safety log, which shows the officer’s version of events, reads:

Summary: WHILE ASSISTING ANOTHER OFFICER ON NOISE COMPLAINT, PERSON PUSHED AND

INTERFERED WITH OFFICER. OFFICER ISSUED APPEARANCE TICKET FOR THE TOWN OF ITHACA

COURT FOR DISORDERLY CONDUCT AND PERSON JUDICIALLY REFERRED FOR CRIMINAL

CONDUCT, FAILURE TO COMPLY AND HARASSMENT. A SECOND PERSON WAS JUDICIALLY

REFERRED FOR FAILURE TO COMPLY AND HARASSMENT. (MPO BRAD BATES)

Spearman said they talked about it for the rest of the night.

“I don’t think it has a lasting effect on them as much as it does us,” Spearman said. “We all felt each other’s pain … It was very emotional and straining on us, and we didn’t feel safe. You kind of don’t want to go to those people who also treated you wrong when something happens to you. … We were a bunch of small girls against these 6-foot-something men, 100 pounds easy heavier than us, so I kind of think ‘What makes you think you should push this woman into the couch for no reason?’”

Brooks said she also felt the the officers abused their authority and said they needlessly escalated the situation.

“We were the ones that were outnumbered, in a sense,” Brooks said. “You don’t just come at girls forcefully because they’re telling you ‘We don’t allow you to come into our house. Don’t touch us. You’re not supposed to. Don’t put your hands on me. I didn’t put my hands on you.’”

Brooks and Spearman said they brought the issue up to Judicial Affairs and were given an apology and told the college dropped the charges. Michael Leary of the Office of Judicial Affairs declined to comment, saying such matters are considered private and protected under the Family Education Rights and Privacy Act.

Brooks also said they brought it up as a Title IX complaint, but no significant follow-up was made. Philip Garin, a paralegal in the Division of Human and Legal Resources, declined to confirm, deny or comment on this incident being reported under Title IX, citing FERPA.

The college’s Office of Legal Affairs declined to comment or confirm or deny that they received an incident report, saying all reports under Title IX are private and protected under FERPA.