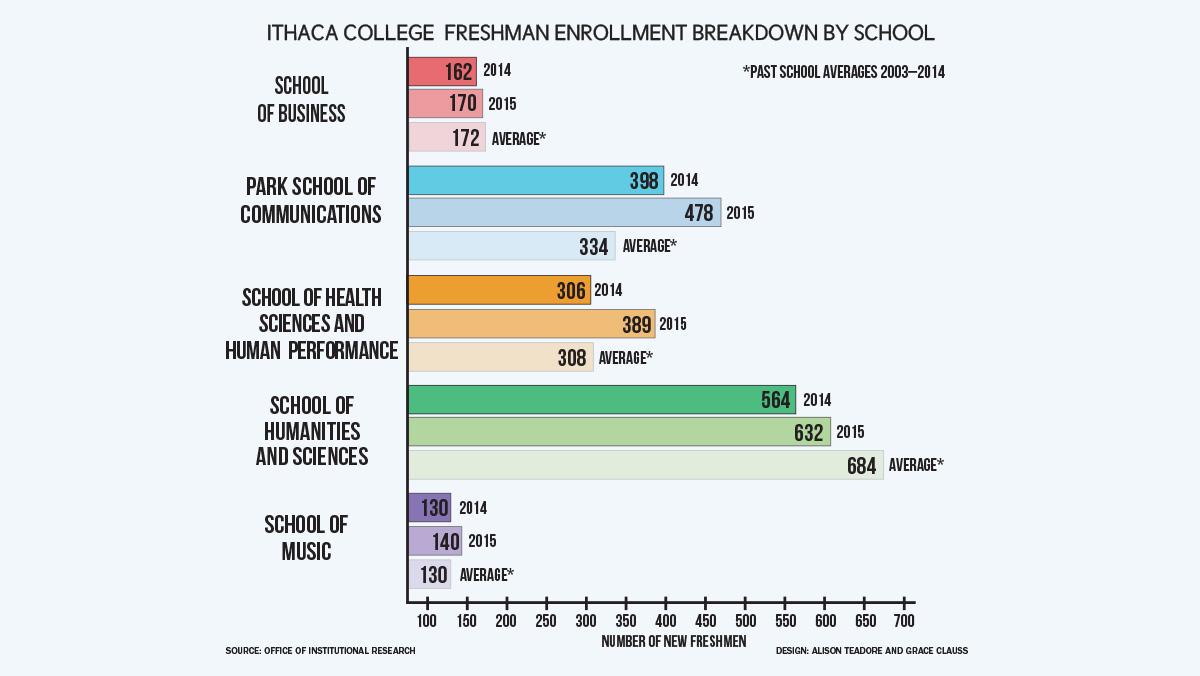 Ithaca College exceeded its 1,700 student enrollment goal by more than 100 students in 2015 after increasing the college’s acceptance rate by almost 8 percent.

The Office of Institutional Research released all of the official enrollment statistics on the college’s website in the Ithaca College Facts in Brief on Sept. 25.

After falling short of the enrollment target in 2014 by 150 students, Gerard Turbide, interim vice president of enrollment management, said the college adjusted its offers of admission. The adjustment included an 80-student increase in the Roy H. Park School of Communications and a 34-student increase in the Department of Theatre Arts, the largest increases for any school and department at the college.

After a record 18,207 applicants last year, the college had 1,688 fewer prospective students apply this year, which was still the second-most applications the college has ever received.

Nicole Eversley Bradwell, interim director of admission, said she thought the college was able to increase enrollment by admitting students who were more engaged with the college. The college measures engagement by the student interactions with faculty, attendance at admission events and interactions on IC Peers.

The freshman class at the college includes 1,808 full-time new freshmen, the third-largest class the college has seen since it began reporting such data in 1962. The largest class was in 2009, when 2,027 first-time full-time freshmen enrolled in the college, a year in which the college’s acceptance rate also climbed to 79 percent.

Turbide said the college is happy with the increased enrollment.

“This is a great, strong, talented incoming group of students,” Turbide said. “This is not a number the college can’t handle in any aspect.” 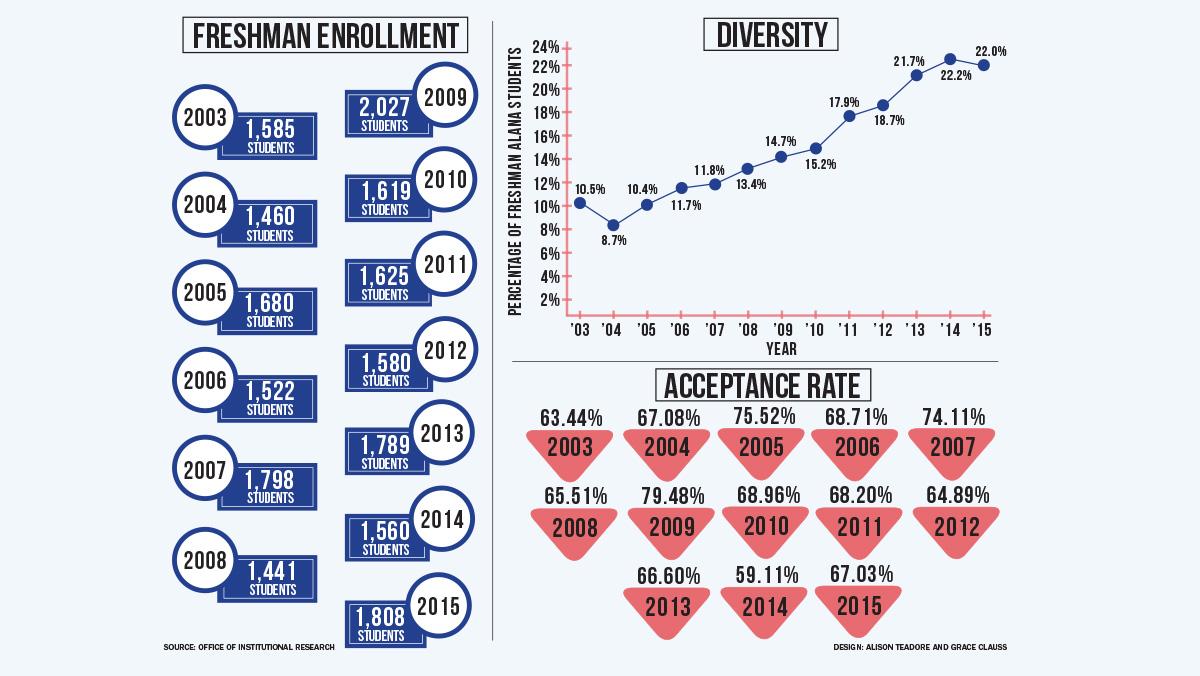 Turbide said fewer secondary schools have been reporting class rank.  He said there are many reasons schools aren’t reporting rank.

“Certainly, a good reason to move away from ranking is that the practice might lead some to conclude that a person’s rank within their class is a direct reflection of their relative worth as a human being among their peers,” Turbide said. “That seems problematic to me.”

He also discounted the importance of it as a statistic.

“For us, rank is not as important an indicator of a student’s potential to succeed as are things like a student’s course selection and how well they have done in their coursework, reflected in grade point average,” he said.

The college doesn’t provide data on the class’ GPA.

The School of Music has 140 new freshmen, and the School of Health Sciences and Human Performance has 389 new freshmen, both the second-largest classes of students since 2003. The School of Business has 170 full-time, first-time freshmen, only slightly below its average over the last 12 years of 172.25

The School of Humanities and Sciences, however, had its second-smallest class of students since 2003, with only 2014 being a smaller class. The 632-student class is 52 students smaller than its average over the last 12 years.

Eversley Bradwell pointed out that the major and school choices of incoming students may have to do with factors outside the college’s control.

“In my personal observation, a lot of it has to do with what’s on television,” she said. “If there’s a popular character and they’re doing something and it’s intrigued that age group, we’ll get a lot of questions about that as a career and what you can major in to become that.”

Jennifer Jolly, associate professor and chair of the Department of Art History, said she thinks professional programs are more popular because of the state of the economy and the perception that college is meant to prepare you for a specific profession.

“Right now with the economic downturn, people are looking at the high cost of college, and they’re very anxious about what kind of job you get right out of college,” Jolly said.

Jolly said there are entry-level humanities jobs, but there is a perception that these jobs are hard to find.

In response to students’ perceptions, Jolly said her department has begun to offer programs that have a clearer career track. In 2011, the Department of Art History added an architectural studies major, and in 2013 it added a museum studies concentration within the art history major.

The Department of Art History only has two freshmen majors this year, and in 2014 they had none.

While the department is affected by low enrollment, Jolly said because of ICC requirements and the curiosity of students outside of art history, most of their 100- and 200-level courses are full.

However, Jolly said she believes a low number of students majoring in the programs in the department caused the department not to get a tenure-track faculty member this year to replace Stephen Clancy, who retired in May 2015.

“In our department, we have the resources to do what we need to do,” Jolly said. “I just wish that we could get another tenure track line right now.”

“We did a more focused recruiting effort, and it paid off,” Weidner said.

She also said she didn’t think that this year’s yield — the percentage of accepted students who actually enroll — would be part of a trend.

“We have highly selective programs,” Weidner said. “So when we make offers to students and then they say yes to us, our yield might go up. It’s because of the quality of the program. It’s not because we let in students that aren’t of the highest quality.”

Weidner said with the increased number of freshmen, the department has added new sections of classes, and the college installed a new dance floor into Job 161 to help them accommodate more students. Weidner said it was difficult for the theater department department of theatre to hire additional full-time faculty because often the extra sections are in highly specialized classes.

Weidner said she couldn’t equate the additional sections to the number of faculty the department added.

The Department of Theatre Arts’s yield rate was 42 percent this year, compared to a usual yield of about 27–30 percent. This increased yield caused an increased class size, as theater usually looks to enroll about 80 students, Weidner said.

Weidner said there is no correlation between H&S enrolling fewer students and the Department of Theatre Arts enrolling more.

The department won’t be getting much bigger than the 347 students it has currently enrolled and wouldn’t be able to without increasing the size of their facilities, Weidner said.

Four hundred and seventy-eight new freshmen enrolled in the Park School — which Diane Gayeski, dean of the Park School, said is the largest class of students ever — an increase that has caused some changes in the school. Gayeski said the development was a product of good press for the programs inside the Park School, the growth of the Department of Media Arts, Sciences and Studies, including the emerging media major, and a competitive applicant pool.

“We had really strong applications,” Gayeski said. “We are growing in reputation. We are starting to build on programs that are relatively new.”

The Park School did not increase its class sizes, Gayeski said, so to compensate for the additional students, Park added faculty members.

Gayeski said the Park School added four new full-time faculty lines this year, whose contracts may be extendable for two or three years.

“Before we search for full-time, tenure-eligible positions, we want to make sure that this is where we want to stay, that the college wants to maintain this level of enrollment,” Gayeski said.

Turbide said the Park School had a large applicant pool, but the specific number of applicants is not released by the college.

Gayeski also said Park School students are some of the most competitive and are often judged on their media experiences in high school, along with other factors, making it difficult to compare them to accepted students in other schools at the college.

The communications school may not retain the record number of students it has this year as some students may change majors outside the Park School, Eversley Bradwell said. Turbide said each year, the college sees a variance in the programs students apply to.

“Each year you see varying interest in academic programs,” Turbide said. “It’s really hard to know all the things that influence interest in a particular program.”