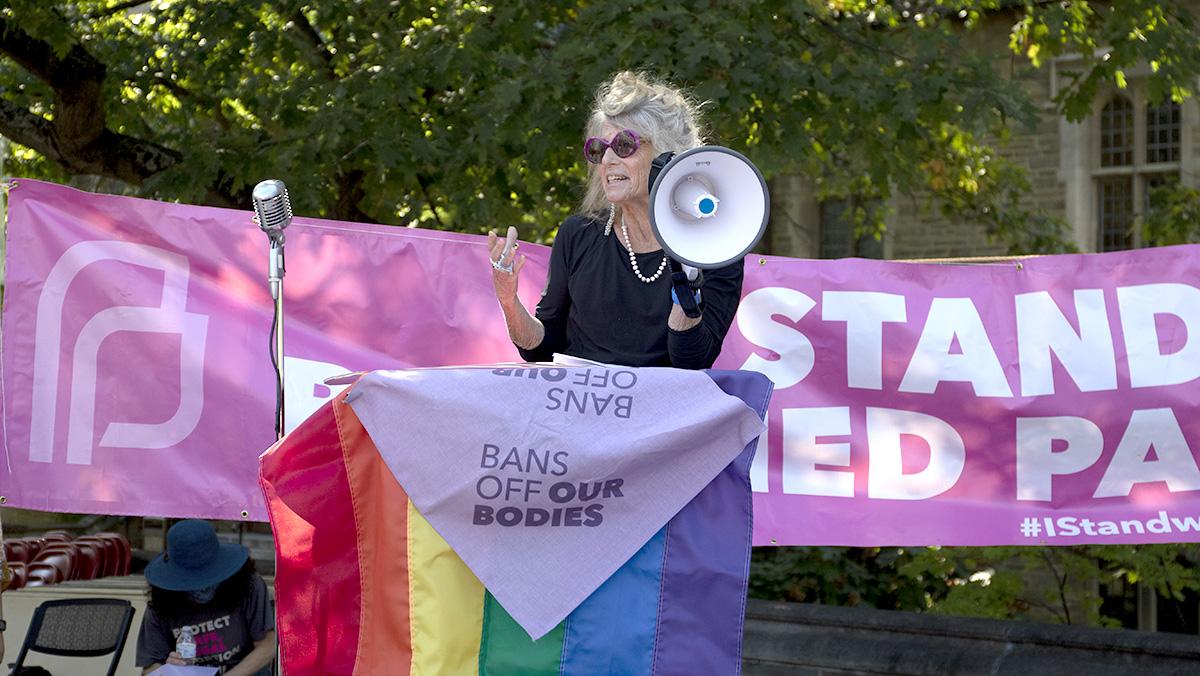 Ana Maniaci McGough/The Ithacan
Zillah Eisenstein, professor emerita in the Department of Politics at Ithaca College, was one of the speakers at the rally and talked about the importance of not only keeping abortions legal, but also making them accessible.
By Alyshia Korba — Senior Writer
Published: October 6, 2021

Chants of “Not the courts, not the states, women must decide our fate,” filled Cornell University’s Ho Plaza on Oct. 2 as people from Cornell University, Ithaca College and the greater Ithaca area rallied for reproductive rights.

The rally was incited by new abortion restrictions enacted by the state of Texas on Sept. 1. Senate Bill 8 bans people from getting abortions at six weeks of pregnancy and does not include exemptions for pregnancies resulting from rape, incest, sexual abuse, and fetal anomalies, according to Planned Parenthood of Greater Texas. Most people learn that they are pregnant between the fourth and seventh weeks of pregnancy, according to the American Pregnancy Association. Senate Bill 8 is known as the “Texas Heartbeat Act,” because the bill bans abortion when a “heartbeat” is first detected in an embryo. However, this is a misleading title because cardiac activity is only detected in the fetal pole — a four millimeter-wide thickening next to the yolk sac at six weeks.

Abortion rights are historically controversial in the United States. The Supreme Court will hear a case Dec. 1 that has the potential to overturn Roe v. Wade, which granted people the right to have an abortion before the fetus is viable to survive outside the uterus. This case led to the decision that states cannot restrict abortions during the first trimester, it can be regulated but not banned, and in the third trimester, states can restrict abortions unless it is necessary for the parent’s health. Dobbs v. Jackson Women’s Health Organization will determine whether it is unconstitutional for states to ban pre-viability abortions.

Planned Parenthood Generation Action (PPGA) at Cornell and PPGA at Ithaca College organized the rally as a part of a national movement against the Texas Senate Bill 8. Over 150 rallies and marches were held across the country Oct. 2 to protest the bill as a part of the Women’s March Network.

Julia Ganbarg, Ithaca College senior and president of PPGA at Ithaca College, said the goal of the rally was to provide a place for people to share frustrations about Senate Bill 8 and show support for reproductive rights.

“The rally was a place for people who had anger but didn’t know how to channel it, to come together and listen to some speakers who share similar passions and who have had experience with fighting laws for decades now,” Ganbarg said via email.

Zillah Eisenstein, professor emerita in the Department of Politics at Ithaca College, was one of the speakers at the rally and talked about the importance of not only keeping abortions legal, but also making them accessible.

“It is really important to understand that the legal right to choose an abortion is very different than being able to access and get one,” Eisenstein said.

Depending on factors like insurance coverage, the abortion method and how far along the pregnancy is, an abortion can cost anywhere between $0–$1,500, according to Planned Parenthood. Eisenstein discussed social factors that can make it difficult or dangerous to access abortions, sharing that her daughter felt unsafe while working at an abortion clinic in Buffalo, New York.

“You need not look elsewhere to other countries to see women disrespected, undervalued and also feared,” Eisenstein said. “We have our very own Taliban right here. They are homegrown American white men.”

Cornell University senior Shamyra Coleman said this rally and Senate Bill 8 is very personal to her because she is from Texas.

“About three years ago, I had an abortion myself, so those rights would have been taken away from me,” Coleman said.

Hannah Dickinson, associate professor in the Department of Writing and Rhetoric at Hobart and William Smith Colleges in Geneva, New York, and organizer with the Geneva Women’s Assembly, spoke about making abortions accessible for people of color, transgender people and working-class people.

Cornell University juniors Mel Miller and Maisie McDonald and sophomore Presley Church worked with PPGA at Cornell and PPGA at Ithaca College to help organize the event. They all said they felt that the rally was successful.

“We had so many great speakers, and I think now we also have action items that we can continue to share,” Church said.

Ganbarg said she thought the rally was successful in helping people work together to protect reproductive rights.

“I’m really glad the city of Ithaca, New York was able to participate in this nationwide movement and provide a space for those who needed to release frustration and come together with like-minded individuals to fight for what we know is right,” Ganbarg said.

At the rally, people were encouraged to sign a Planned Parenthood petition supporting abortion rights, write letters to their elected officials and donate to a Texas abortion fund.

Dickinson noted the importance of grassroots activism efforts like holding rallies in support of reproductive rights and protesting abortion restrictions.

“History books would like to tell us that it was the Supreme Court or a politician that granted us access to abortion,” Dickinson said. “No, it was groups like this. People who said ‘No, we are standing up for ourselves, for our sisters, for our mothers, for our trans siblings and saying ‘enough is enough.’”