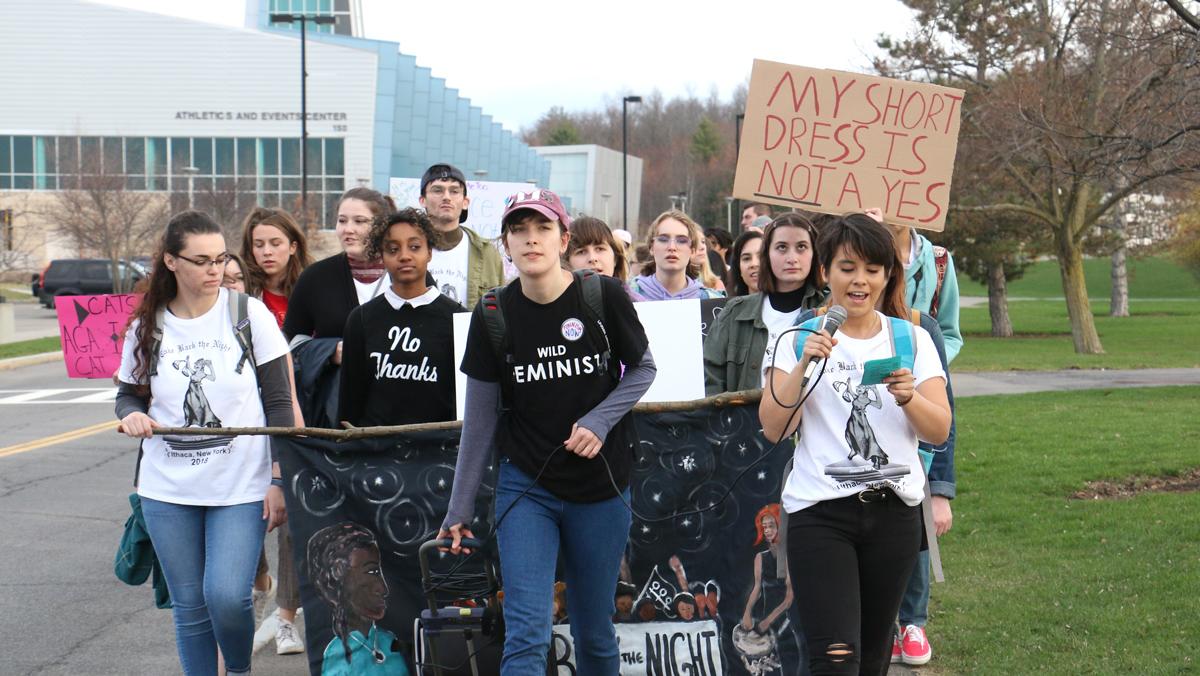 Maxine Hansford/The Ithacan
Members of the Ithaca College community marched from the Textor Ball to The Commons as part of the Take Back The Night march protesting acts of sexual violence and abuse April 27.
By Phoebe Harms — Staff Writer
Published: April 30, 2018

“Out of our homes, into the street,” sophomore Maria Bushby screamed into a microphone as she led a group of over 30 Ithaca College students down the streets of South Hill on April 27.

“We won’t be raped, and we won’t be beat!” Bushby screamed.

The group of students was marching as part of Take Back the Night, a worldwide movement dedicated to protesting acts of sexual, domestic and relationship violence. This is the 39th year the Advocacy Center of Tompkins County has hosted the event, according to Naomi Barry, the adult community educator at the Advocacy Center and lead planner for the Take Back the Night event. There were three marches that led to The Commons, consisting of students from the college, Cornell University students and various community members, who all met at approximately 7 p.m. on The Commons. 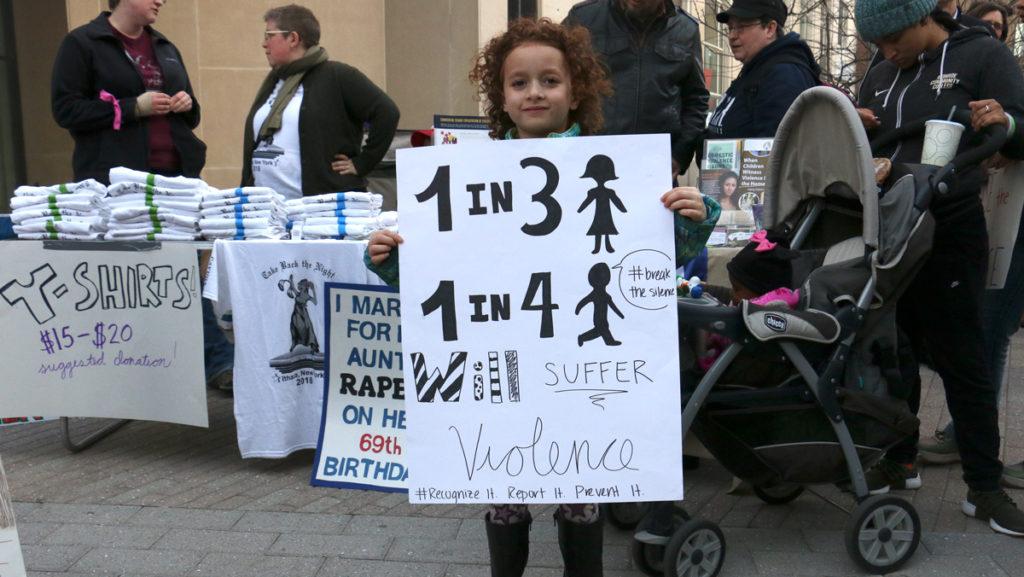 Raylin Berrios, member of the Ithaca community, holds a sign with statistics about violence on The Commons. (Maxine Hansford/The Ithacan)

Take Back the Night is an event dedicated to reclaiming a space for survivors of all forms of sexual violence and an opportunity for allies to stand in solidarity with those survivors, junior Anna Gardner said. Gardner organized the march for the college on behalf of Ithaca College Feminists United, a group dedicated to social, political and economic equality for all genders. Take Back the Night’s unifying mission is to end all forms of sexual violence for those of all genders and backgrounds, according to the club’s official Facebook page. Each year, the event follows a specific theme, and this year the theme was Justice for #MeToo in honor of the women who spoke out with stories of sexual assault this past year.

The event consisted of marches; performances by local musicians, such as Angie Beeler; and local dancers, such as Coraline Chardonnay from The House of Merlot, Ithaca’s premiere drag performance troupe. There were also speakers, such as Liz Karns, an epidemiologist and lawyer in Ithaca, and Ithaca Mayor Svante Myrick. Space was also made for speak–outs, opportunities for survivors or allies of victims of sexual violence to share their personal stories with the crowd. 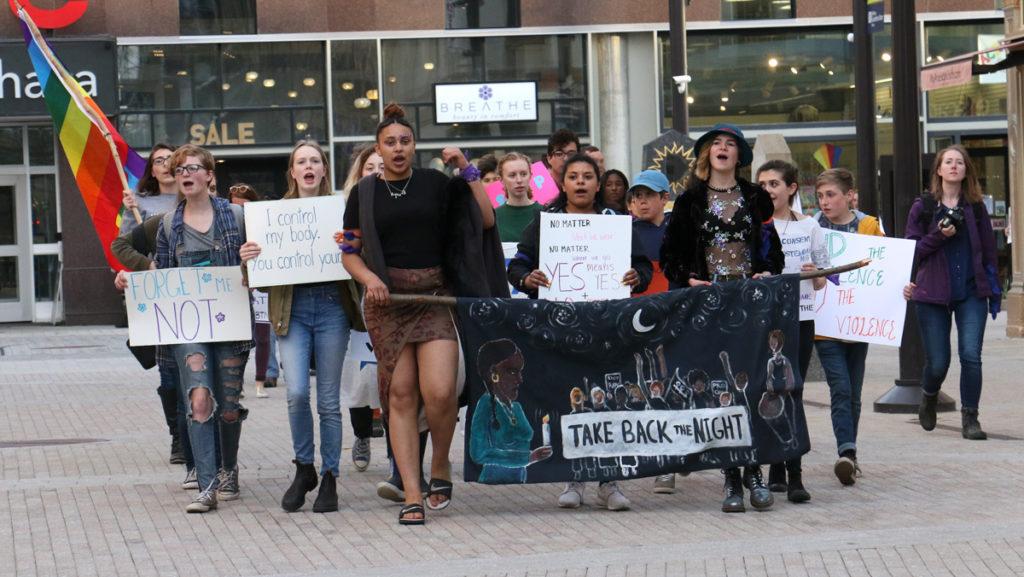 Members of the Ithaca community march on The Commons. (Maxine Hansford/The Ithacan)

In the United States, 1 in 5 women and 1 in 71 men will be raped at some point in their lives, according to the National Sexual Violence Resource Center. Additionally, 51.1 percent of female victims are raped by intimate partners, and 40.8 percent report rape from an acquaintance. A common theme discussed at the Take Back the Night event was how the cost and impact after sexual assault are more than just an emotional and physical toll. The average lifetime cost for a rape victim is $122,461 because of legal fees and treatment. Rape costs the United States more than any other crime, a total of $127 billion per year, according to the National Sexual Violence Resource Center.

Karns spoke about these expenses of sexual violence during the event.

“Sexual violence is a lifetime cost,” Karns said. “And that cost begins directly after the assault occurs.” 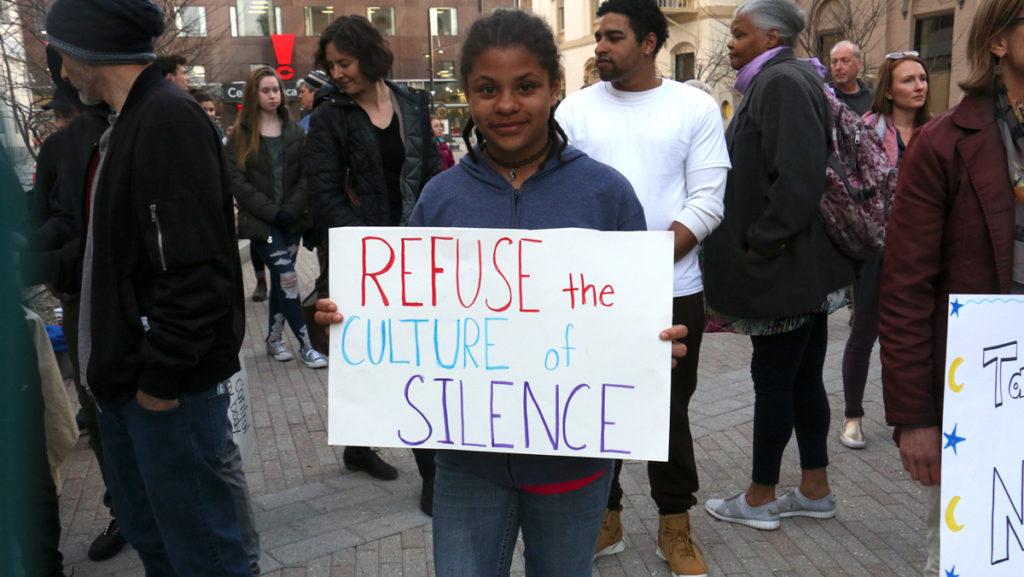 Brianna Smith, member of the Ithaca community, holds a sign in protest of the cause on The Commons. (Maxine Hansford/The Ithacan)

Throughout the evening, several other speakers talked about their personal connections with sexual violence, as well as their appreciation for events like Take Back the Night. The first speaker of the evening was Myrick, who spoke of the importance of protesting at a local level.

“Your very presence here shows that this is a problem everywhere,” Myrick said.

Myrick issued a special proclamation for the event: April 27 will now serve as Take Back the Night Day in the city of Ithaca. 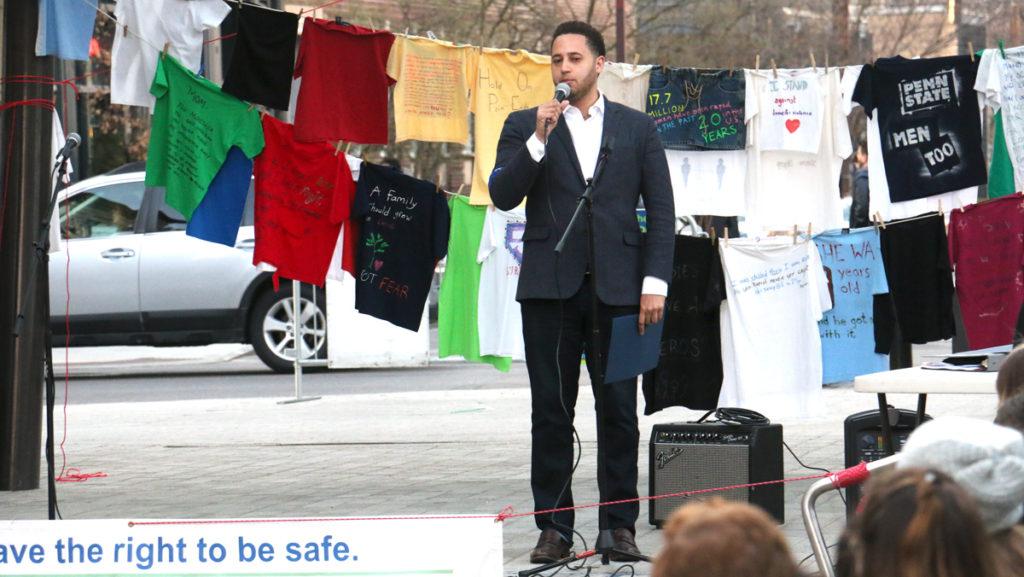 Beeler sang a heartfelt original ballad, dedicated to her friend who died from sexual violence and abuse.

All participants were encouraged to wear different–colored ribbons, representative of their story. Survivors wore purple ribbons, allies wore blue ribbons and employees of the Advocacy Center of Tompkins County wore pink ribbons. Mariah Nodan, a domestic violence advocate, said it was amazing to see how many individuals were participating in the event.

“Today, all of these people are raising their voices in anger and frustration,” Nodan said. “They want to spread the word about these issues. They want people to know what’s going on.” 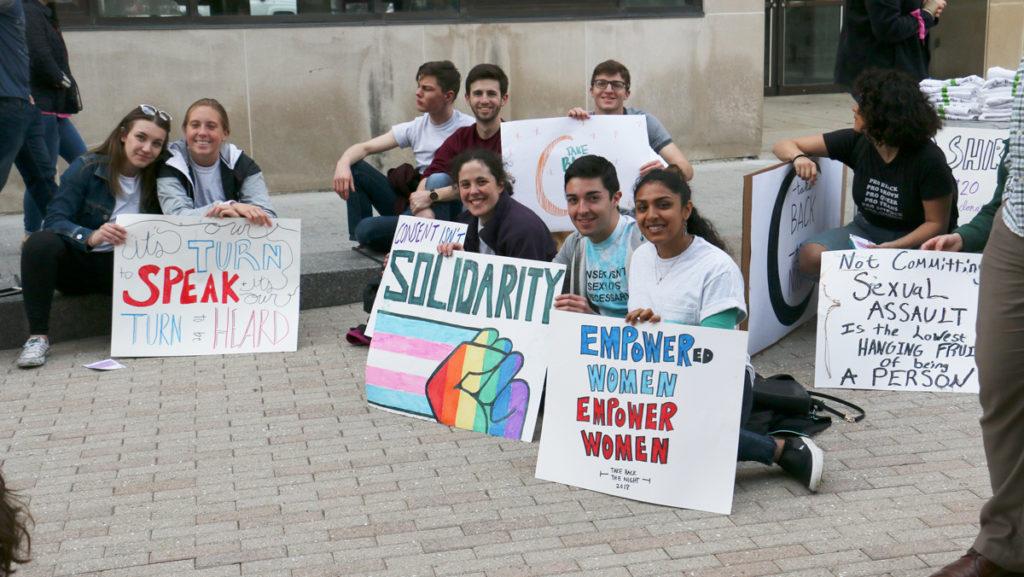 A group of community members sit on The Commons holding signs that share messages of support for survivors of sexual assault and abuse. (Maxine Hansford/The Ithacan)

Barry said that every year, the speak–outs are the most moving portion of Take Back the Night.

“It’s always incredibly powerful to hear survivors speak to the impact and rawness of their experiences,” Barry said. “Every year, I am floored to see the strength, passion and resilience of these survivors.”

Ithaca College sophomore Hannah Mahany said she has friends and family who are survivors of sexual violence and assault and that it was important to stand in solidarity with them.

“This has gone on far too long,” Mahany said. “We have to speak up. We have to say something.” 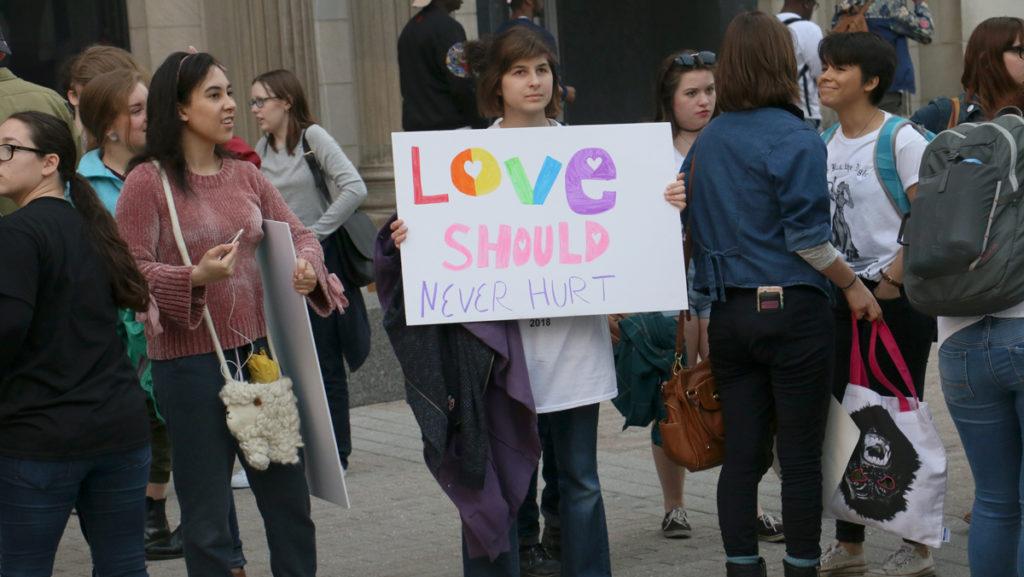 Senior Irene Case holds a sign in support of those who have experienced sexual assault and abuse on The Commons. (Maxine Hansford/The Ithacan)

Ithaca community marches to take back the night

Students join forces to take back the night

It was problematic that very few community leaders were present at Take Back the Night.

Editorial: Community leaders absent at Take Back the Night